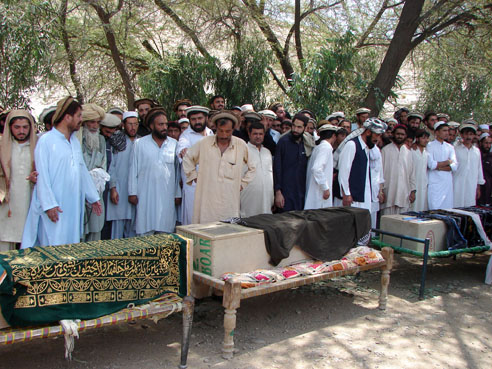 Akram Shah was one of at least five men – all reportedly civilians – killed in a drone strike on a car.

Shah was a married father of three in his mid-30s. He worked as a driver, formerly as a taxi driver and latterly as a driver for the Pakistan Water and Electricity Development Authority. He belonged to either the Tori Khel or Bora Khel tribes.

Shah lived in Spalga, a village 15km outside Miranshah, ‘in a large extended-family compound headed by [a] cousin, a prominent malik [tribal elder]’, the report added.

On the evening of June 15 2011, Shah and his friends were driving a couple of kilometres outside the village of Sirkot when a drone attacked, firing multiple missiles A local later described the remains of the car after the attack as resembling ‘a sandwich bent in half’.

Following the strike, furious tribesmen blocked the road to Miranshah to protest at the civilian deaths. Pakistani newspaper Dawn reported that more than 2,000 tribesmen joined the protest. Funeral prayers were held in the village of Qutab Khel.

The Living Under Drones study reported that Shah’s wife ‘became mentally unwell after his death, and now suffers from hypertension and headaches’. A relative now supports the family.