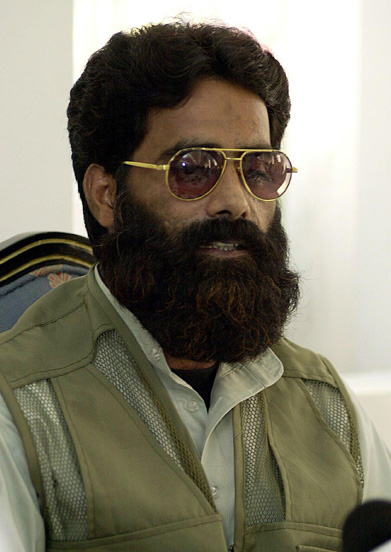 Veteran militant Ilyas Kashmiri fought in Afghanistan and Kashmir, and trained militants in North Waziristan. A senior US military intelligence official described him as ‘one of al Qaeda’s most dangerous commanders’, and he was associated with numerous militant groups. While he was reportedly killed in a drone strike in September 2011, rumours suggested that he had survived the attack.

Born and raised in Bhimber district of Kashmir in 1964, Kashmiri attended Allama Iqbal Open University in Islamabad. He abandoned his studies in the 1970s to fight the Soviets in Afghanistan.

Reports suggest he served in the elite Special Services Group of the Pakistani army, training Afghan fighters, during the 1970s and 1980s. According to some reports he became an expert on US mines supplied to the Mujahideen, though he denied being in the army in a 2009 interview. During his time in Afghanistan he lost a finger and the sight in one eye.

Kashmiri is linked to fighting in Afghanistan throughout the 1980s and into the 1990s. He joined Lashkar-e-Taiba, the militant group that aims to eject India from Kashmir, but quit and formed his own group, Harkat-e-Jihad-i-Islami (HuJI), after ‘differences’ with Lashkar-e-Taiba’s founder Hafiz Saeed. By the 1990s he was fighting in Indian-held Kashmir with HuJI, allegedly with the support of the Pakistani state.

In 1994 Kashmiri’s profile rose dramatically when he helped kidnap four foreign tourists, using their capture to demand the release of Maulana Masood Azhar, founder of radical group Jaish-e-Mohammad. He carried out the kidnap with Omar Sheikh, a member of Jaish-e-Mohammad and al Qaeda who was linked to the beheading of US reporter Daniel Pearl.

In February 2000, Kashmiri led a 313 Brigade raid against Indian soldiers at the Line of Control to avenge the killing of 14 Pakistani civilians. According to his BBC obituary, he decapitated a soldier, returned to Pakistan with the head in a bag, and presented it to Pakistani generals. Some rumours suggested he even presented it to General Musharraf.

After a December 2003 assassination attempt to assassinate Musharraf, Kashmiri was arrested on suspicion of involvement in the plot, although he was later released.

The Asia Times later wrote that Kashmiri was ‘profoundly affected’ by his arrest and ‘abandoned his struggle for Kashmir’s independence and moved to the North Waziristan tribal area with his family’.

By 2005, HuJI had shifted its base from Kashmir to FATA, Pakistan’s tribal regions. Kashmiri was accused of involvement in a 2006 attack on the US consulate in Karachi in which a US diplomat and three others were killed, and 48 more were reportedly injured, the BBC reported after his death.

The US attorney general claimed in an indictment against a US citizen, Raja Khan, who was charged with helping al Qaeda, that by 2008 Kashmiri was ‘purportedly receiving orders from al-Qa’ida’s leader, Osama bin Laden’. According to the charge, ‘Khan learned that Kashmiri wanted to train operatives to conduct attacks in the United States’.

In 2009, the FBI charged Kashmiri – along with US citizen David Coleman Headley (who was also charged in connection with the Mumbai terror attacks, which killed over 164 people), Tahawwur Rana, a Canadian citizen living in Chicago, and Abdur Rehman Hashim Syed, a retired Pakistani major – with planning to attack a Danish newspaper, its editor and its cartoonist. The newspaper, Morgenavisen Jyllands-Posten, had published cartoons mocking the Prophet Mohammed in 2005. Kashmiri had suggested using a truck bomb to carry out the attacks, the FBI claimed.

The same year, he was believed to have helped plan an attack on a complex run by the ISI, Pakistan’s secret service, in Lahore – Pakistani newspaper Dawn described this as one of a series of attacks he masterminded on government installations. AFP reported that he carried out an attack on national army headquarters in Rawalpindi.

In September 2009, reports surfaced that Kashmiri had been killed in a strike that targeted a vehicle and a madrasa in North Waziristan, alongside Mustafa al Jaziri, a senior al Qaeda figure. At the time, a senior US official told the Long War Journal that Kashmiri was ‘one of al Qaeda’s most dangerous commanders’ and added: ‘If we got Kashmiri, this would be the most successful strike against al Qaeda this year.’ The following week more reports suggested he had been killed in a second strike, alongside Najmiddin Kamolitdinovic Jalolov.

But the following month Kashmiri resurfaced, giving an interview to the Asia Times in which he said of the recent attempts to kill him: ‘They are right in their pursuit. They know their enemy well. They know what I am really up to.’

In 2010 the UN Security Council listed Kashmiri as an al Qaeda linked terrorist, claiming that in early 2009 he had run a camp in Miranshah, training around 160 individuals, of whom 55 were reportedly training to become suicide bombers. The following April the US announced a $5m bounty on his head and made him a ‘specially designated global terrorist’ – a category it reserves for the most dangerous individuals.

In June 2010 senior al Qaeda operative and ‘financial officer’ Mustafa Abu al-Yazid referred to Kashmiri as the leader of al Qaeda in Kashmir in a taped message.

The same year, intelligence agencies uncovered a nascent plot to attack targets in the UK, France, Germany and the US. Counter-terrorism agents told Dawn they believed Kashmiri was the ‘main coordinator’ of the plans. ‘Kashmiri is the most important guy linking Al Qaeda with Western recruits,’ said an unnamed European intelligence official in a Newsweek profile.

In June 2011, Kashmiri reportedly died in a drone strike in South Waziristan with at least seven of his men; reports suggested he was sleeping or taking tea in an orchard at the time of the attack. However rumours persisted that he had survived the attack. His family claimed they had not been contacted by jihadis to inform them of his death, while al Qaeda did not release an official martyrdom statement, and other sources pointed out that a photo supposedly of him was in fact someone else, the Long War Journal reported. In March 2012 Pakistani newspaper the Daily Times reported that Kashmiri had been spotted in North Waziristan, visiting Hakimullah Mehsud, commander of the Pakistan Taliban (TTP).

But in June 2012 the Pakistan Taliban gave a more detailed account of his death. Commanders claimed he was injured in the initial strike, and after medical treatment was taken to recuperate at a house formerly used by Afghan refugees in Danna.

‘He had spent almost a week at a mud-house in Danna village to recover from his wounds suffered in the first drone attack when the drone fired two missiles and hit the same house in which Kashmiri was staying. He was killed along with four to five other people, all hailing from Punjab,’ a Taliban commander told reporter Mushtaq Yusufzai in August 2012.

According to this account he was buried before a small gathering in Azam Warsak.