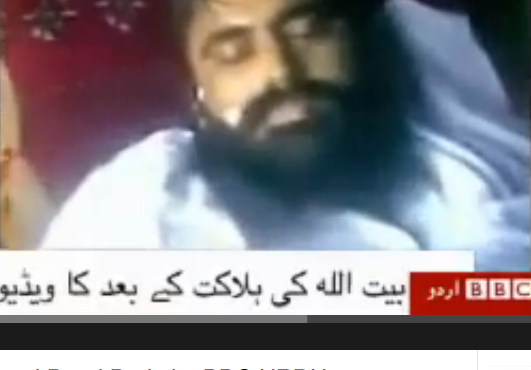 After a series of attempts, the CIA finally killed Baitullah Mehsud, the leader of the Pakistan Taliban (TTP), in an August 2009 drone strike. He is among the most senior militants to die in a drone strike.

Baitullah Mehsud was born in Bannu as Ubaidullah Mehsud, in either 1970 or 1975, into the Shabi Khel Zarai Khel sub-tribe of Mehsud. His father was Maulvi Muhammad Haroon and he had four brothers: Zahir Shah, Yahya, Ishaq and Yaqoob Khan. He changed his name to Baitullah when he started studying.

According to an obituary from jihadist website Global Islam Media Front (GIMF), he attended a madrasa in Akora Khattak, Madrasa Nizaamiah in Mir Ali and Peepli Madrasa in Bannu, graduating from Bannu City School. However other reports say that he did not finish his religious education. He later built a house in the village of Shaga in South Waziristan.

According to two reports, Mehsud worked as a gym instructor, and his family made their living as lorry drivers.

His first marriage reportedly took place in 2003 to a woman of the Afridi tribe, and the second in 2008 to the daughter of Haji Akramuddin Shabi Khel, according to the GIMF obituary. One of his followers later said ‘one of his wives’ was with him when he died, suggesting he did not divorce his first wife.

Mehsud spent the late 1980s fighting the Soviet army in Afghanistan, according to a Pakistani intelligence official, although other reports claim he didn’t begin fighting in Afghanistan until 1993. During the 1990s he fought with Taliban militias as they pushed into Kabul. When the US forced al Qaeda out of Afghanistan after the September 11 2001 attacks, he helped them find sanctuary in Pakistan. He rose to prominence as a supporter of the one-legged militant Abdullah Mehsud, who was incarcerated at Guantanamo Bay following the September 11 attacks.

Baitullah Mehsud emerged as a major leader after Nek Mohammed, the popular commander who led the first wave of Taliban attacks against Pakistani targets, was killed in the first known Pakistan drone strike in June 2004 (see B1). Baitullah Mehsud initially formed a militia, which the GIMF obituary said was the Tanzeem e Taliban Masood division, with the approval of the leadership of the Afghan Taliban, and continued launching attacks against the Pakistani state. He was said to have a good relationship with Mullah Omar, leader of the Afghan Taliban, and was even referred to as his protegé.

In 2007, Mehsud’s men captured more than 200 Pakistani soldiers in an ambush and held them hostage for over a month, only releasing them in exchange for the government releasing 25 Taliban fighters. That year he also declared himself to be at the head of an alliance made up of several factions under the umbrella of the Tehrik-e-Taliban Pakistan (TTP) – the Pakistan Taliban. His forces grew to an estimated 12,000 Pakistani fighters and 4,000 foreigners – some put his forces at 20,000 men. The ISI, Pakistan’s most powerful intelligence agency, referred to him as the country’s public enemy number one.

When Benazir Bhutto was assassinated in December 2007 Mehsud was accused of plotting the attack (although he denied any involvement). He was also charged with a spate of attacks – both suicide attacks and others) across the country, including the September 2008 bombing of the Marriott Hotel in Islamabad, in which more than 50 people died. Intelligence agents linked Mehsud to the bombing’s other suspects Qari Saifullah Akhtar and Qari Mohammed Zafar.

The TTP became closely entwined with al Qaeda and Punjabi militant groups, according to security officials, Mehsud also had close relationships with other militant commanders based in Waziristan, including Maulvi Nazir and Hafiz Gul Bahadur.

He was believed to have helped the Afghan Taliban attack US and Coalition troops over the border in Afghanistan. Sources including the US government claim Mehsud also launched attacks in Afghanistan, although one report claims Mehsud did not send his own fighters to Afghanistan, concentrating instead on attacking Pakistani troops.

He claimed some of his attacks were to avenge drone strikes on Pakistani soil and threatened to attack the US on its own soil, saying in March 2009: ‘Soon we will launch an attack in Washington that will amaze everyone in the world.’

The same month, the US announced a bounty of up to $5m (then £3m) for information leading to Mehsud’s capture, while the Pakistani government offered 50m rupees (£373,000). A Time magazine profile published in April 2009 said he had been described as ‘baby-faced and jocular in person’. He traveled in armed convoys and moved from safe house to safe house, the profile added. Others described him as ‘reclusive like Taliban leader Mullah Omar and popular like al Qaeda’s Osama bin Laden’.

By this point Mehsud was an enemy of both the US and Pakistan, and became a prime target for CIA drones. The agency launched numerous attempts on his life, including an attack in which drones targeted one of his commanders, Khwaz Wali Mehsud, and then attacked his funeral later the same day with the reported aim of killing Baitullah Mehsud, who was assumed to be attending. Baitullah Mehsud was unharmed and it is possible he was never there. At least 60 reportedly died, including at least 18 civilians and possibly as many as 50.

By this point Mehsud was also suffering from kidney problems and diabetes. On August 5 2009, he was on the roof of the house of his father-in-law, Maulvi Ikramuddin, in South Waziristan when he was targeted by a drone strike. Some reports suggested he was on a drip receiving treatment from Ikramuddin’s brother, a medical practitioner, at the time of the strike. His second wife was with him – giving him a leg massage, according to the Daily Telegraph, citing CNN – and was also killed. Up to 10 others died too, reportedly including Ikramuddin and his wife, as well as Mehsud’s uncle, and seven bodyguards.

‘[Mehsud] was clearly visible with his wife,’ said an anonymous senior US official who had seen the video. ‘His torso remained, while half of the body was blown up.’

He was buried in Nargasi village, near Zangara, and TTP leaders soon named his cousin Hakimullah Mehsud as his successor.