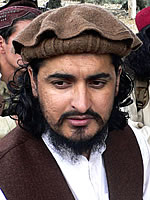 Hakimullah Mehsud was the leader of the Pakistani Taliban (TTP) for four years until he was killed in a US drone strike in November 2013.

A member of the Eshangai branch of Pakistan’s powerful Mehsud tribe, he was born Jamshed Mehsud in the village of Kotkai, South Waziristan tribal agency, in either 1979 or 1980. According to the US Specially Designated Terrorists list, Hakimullah used the alias Zulfiqar for much of his life.

Hakimullah attended the same madrasa in Hangu province, North-West Frontier Province, as his TTP predecessor Baitullah Mehsud. According to several reports Hakimullah dropped out of the Peepli Madrasa after studying for an unspecified number of years.

According to the Combatting Terrorism Center at the US Military Academy, Hakimullah received military training from the Taliban in Afghanistan before returning to Pakistan after the Taliban government fell in 2001.

He adopted his nom de guerre Hakimullah after being recruited to the TTP initially as Baitullah’s bodyguard and driver in 2004. By 2007 he was operating as Baitullah’s spokesperson.

He rapidly gained a reputation in militant circles for extraordinary bravery and recklessness, including a series of increasing daring raids against Pakistani military targets. Admirers compared Hakimullah’s exploits to those of Nek Mohammed, a militant who died in one of the US’s first known drone strikes in Pakistan in 2004.

Hakimullah shot to notoriety as a TTP combatant in 2007 when he spearheaded the taking hostage of more than 100 Pakistani security forces personnel in South Waziristan. The assault preceded a decision by the administration of Pervez Musharraf to release almost 100 prisoners held on terror grounds.

In a rare broadcast appearance, Hakimullah invited journalists to the Orakzai Agency tribal area in late 2008, where he appeared and claimed the TTP was “at war with those who support NATO forces.” Hakimullah is reported to have offered, with characteristic bravado, to take journalists for a ride in a US military Humvee vehicle, which he claimed his troops had commandeered from NATO.

After successive ambushes on NATO convoys bound for Afghanistan, Hakimullah oversaw the torching of more than 100 NATO trucks carrying supplies at a storage depot in Peshawar in December 2008. His exploits impressed Baitullah – then the leader of the TTP – to such an extent that Hakimullah was appointed TTP commander of Khyber, Kurram and Orakzai tribal agencies.

In March 2009, Hakimullah orchestrated an attack on a bus carrying the Sri Lankan Cricket team to a match in Lahore, Pakistan, which killed six policemen and the team’s driver, and injured several players. In June 2009, Hakimullah is said to have arranged the suicide bombing of the Pearl Continental Hotel in Peshawar, which killed 17 people and wounded dozens more.

After successive attempts on his life, the US finally killed Baitullah in a drone strike on August 5 2009, in Ladha, South Waziristan. The strike reportedly killed at least two people, including at least one civilian. On August 22 2009, the Taliban shura council unanimously voted Hakimullah as its new leader.

Hakimullah claimed responsibility for the December 30 2009 suicide bombing attack on a US base, Camp Chapman, in Khost, Afghanistan. The attack killed seven CIA spies, at that point one of the worst attacks against the agency. Hakimullah appeared in a video alongside Humam Khalil Abu Mulal al-Balawi, an alleged Jordanian triple agent who carried out the bombing and who claimed to have been feeding the CIA and Jordanian intelligence agencies false information about the TTP and other extremist Islamist organisations.

The US swiftly attempted to take revenge, and Hakimullah was said to have been killed after being targeted by two US drone strikes in January 2010. However, he was reportedly narrowly missed by the first strike, which killed at least 15 people in Shaktoi, North Waziristan. The second strike killed at least 20 people, including several alleged militants, in an attack on a house belonging to the Mehsud clan. Again, Hakimullah escaped, despite being the apparent target.

Under Hakimullah’s command, the TTP claimed responsibility for a number of attacks, including the failed car bombing of New York’s Times Square in May 2010. These activities prompted the US to place a $5 million bounty on Hakimullah’s head. He appeared defiant in a May 2010 video, in which he threatened to attack more US cities.

In February 2011 Hakimullah appeared in a video in which he purportedly orders the execution of Colonel Imam, a veteran officer in Pakistan’s ISI intelligence service.

Hakimullah was once again reported to have died in a US drone strike on January 12 2012. Up to nine suspected militants were killed in the strike on two vehicles in Dogga, North Waziristan, but the TTP denied Hakimullah was among the dead.

It was under Hakimullah’s command that Mullah Fazullah, the leader of the TTP’s operations in Pakistan’s Swat district, ordered the shooting of Malala Yousefzai on October 9 2012. Fazullah would go on to replace Hakimullah as commander of the TTP.

In April 2013 The TTP launched a sustained bombing campaign against candidates of the secular ANP party running in Pakistan’s parliamentary elections.

The assault prompted ANP chief Asfandyar Wali Khan to declare in May 2013 that “Hakimullah Mehsud was the referee” of the election. Less than two weeks later, Hakimullah’s second-in-command, Wali Ur Rehman, was killed along with as many as seven TTP cadres in a drone strike on a mud house in Miranshah, North Waziristan.

A month before his death, Hakimullah called for “serious talks” with the Pakistani government. In an interview with the BBC, he said the TTP were also willing to consider a ceasefire on the proviso that US drone strikes in Pakistan ceased.

On November 1 2013 Hakimullah was killed by a US drone strike as he drove up to his house in Dande Darpakhel, North Waziristan. Senior militant sources and US officials both subsequently confirmed Hakimullah’s death.

The strike came a day after Pakistani President Nawaf Sharif announced his administration had commenced peace talks with the TTP. Hakimullah’s death prompted uproar among Pakistani political circles, as the TTP vowed to carry out a new wave of attacks in retribution.

Hakimullah was buried at an unknown location on the night he was killed.