January 20, 2017 by Jessica Purkiss and Abigail Fielding-Smith
Published in: All Stories, Covert Drone War, Get the data: Drone wars
Tweet
Email this 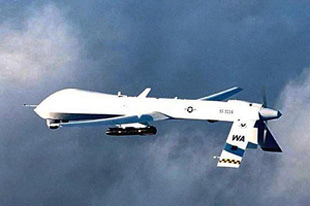 The outgoing Obama administration said on Thursday the US had conducted 53 strikes outside areas of active hostilities in 2016, killing one non-combatant.

This contrasts slightly with reports collated by the Bureau – we recorded 49 counter-terrorism strikes in Yemen, Somalia and Pakistan in 2016, killing four to six civilians.

The White House began publishing casualty data on its counterterrorism operations last year amid calls for more transparency from civil society organisations including the Bureau.  The numbers are not broken down by country however, making it hard explain differences between official figures and our data.

The Director of National Intelligence (DNI) statement did not specify where 2016’s strikes occurred, but said that areas of active hostilities included Iraq, Syria and Afghanistan.

One of the civilian deaths recorded by the Bureau took place in the restive Pakistani region of Balochistan. According to the victim’s family, a drone hit taxi driver Mohammed Azam while he transported Afghan Taliban leader Mullah Akhtar Mansour, unaware of Mansour’s identity. Azam’s family launched a criminal case against the US demanding accountability for his death.

The Bureau also recorded reports of three civilians killed in an attack on what the US described as an al Shabaab camp in Somalia on April 11-12. Witnesses and local officials said the strikes actually hit a village under the control of the militants.

The Bureau put this version of events to a Pentagon spokesperson at the time but were told there were no reports of civilian casualties.

The DNI statement said that “no discrepancies” were identified between its post-strike assessments and credible reporting from non-governmental organisations about civilian deaths resulting from these strikes.

The Bureau recorded the deaths of 362-507 people, including the four to six civilians, as a result of US strikes outside areas of active hostilities last year. The US government put the figure of “combatants” killed in counterterrorism strikes at 431-441.

Obama embraced the US drone programme, overseeing more strikes in his first year than Bush carried out during his entire presidency. The use of drones aligned with Obama’s ambition to keep up the war against al Qaeda while extricating the US military from intractable ground wars, but the targeted killing programme has drawn much criticism.

Dataset: The US aerial campaign continues in Yemen in its fifteenth year.

Dataset: the US air war in Afghanistan continues under its third commander in chief.