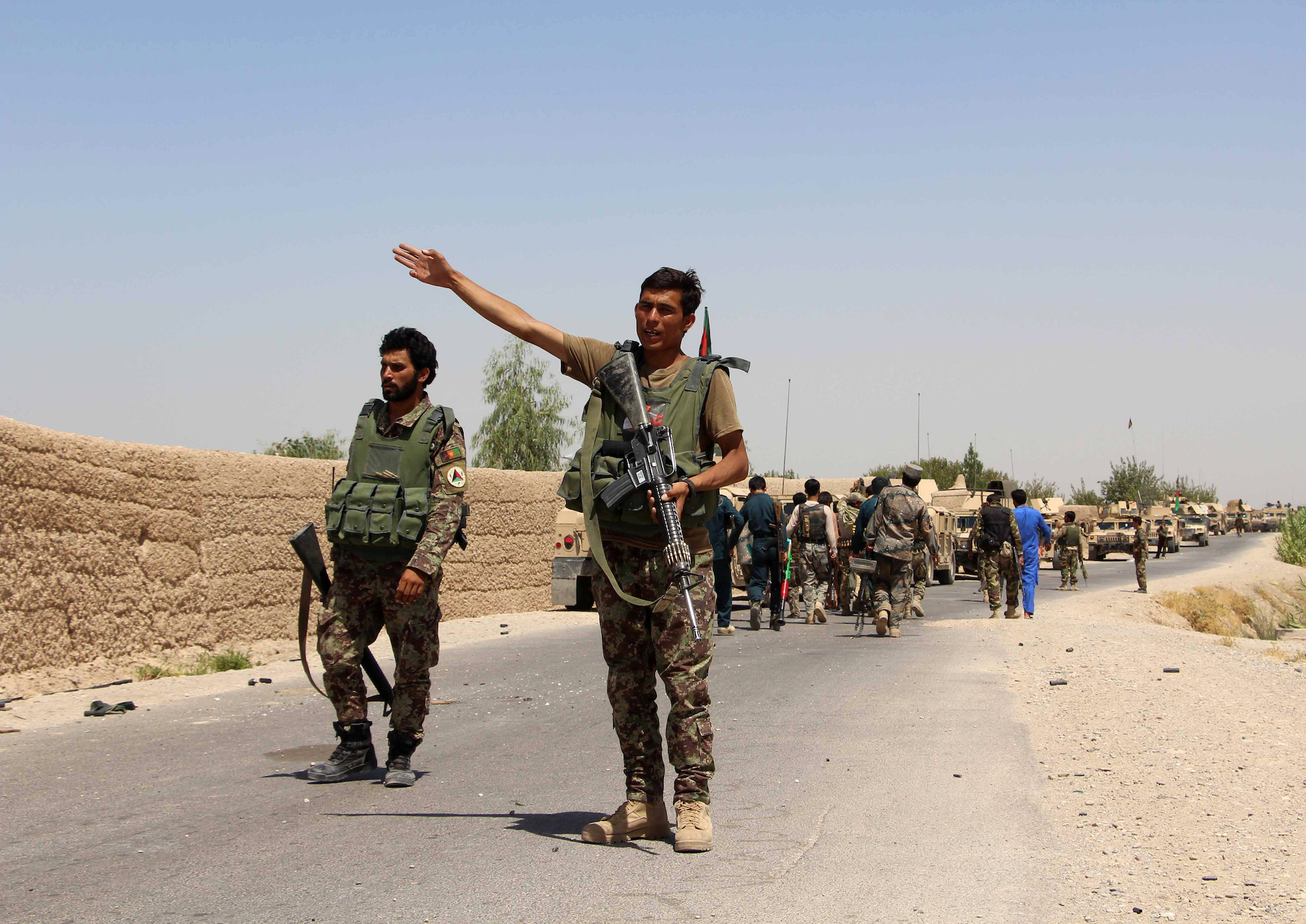 Earlier this year, Muhammad Ikhlas, a farmer from the southern Afghan province of Helmand, made a nerve-wracking journey across the front line of fighting between government forces and the Taliban. He was going to visit his brother Muhammad Rasul, a policeman who had recently been captured by the insurgent group.

Muhammad’s brother was being kept in a building being used by the Taliban as a prison in the Nad Ali district, which the insurgents had overrun. It was a fairly typical house for that area, plain and concrete with a walled courtyard. The Taliban brought his brother down to the courtyard, and Muhammad Ikhlas was able to speak to him, as well as plead for his release.

His biggest fear as he left for home was that the Taliban would execute his brother. He asked a local man to call him if he heard any news.

A week later the phone call he had been dreading came: his brother was dead, his six children now fatherless. But it was not the Taliban who had killed him. The building Muhammad Rasul was being kept in was pummelled by an airstrike.

“I feel like someone has taken my heart out of me,” said Muhammad Ikhlas, still in shock after collecting his brother’s body from the rubble. “We’re defending this country. Despite that, this thing happened to us.”

Local elders put the number of prisoners killed on August 25 at between 25 and 38. One told the Bureau that the prison had been housing about 40 people, mostly members of the Afghan army and police force. A police commander said he had personally seen the bodies of six people that had been brought to his district headquarters after being killed in the strike.

Afghan officials initially claimed responsibility for the attack on the Taliban compound, but a few days later began to row back. General Abdul Raziq Sherzai, the head of the Afghan Air Force in southern Afghanistan, told the Bureau categorically that his fleet had not carried out the Nad Ali strikes.

The US admits carrying out airstrikes in Nad Ali on August 25, but denies killing any civilians or captives.

The Bureau however has spoken to three people who personally knew members of the Afghan security forces who died in the Nad Ali prison that day.

Muhammad Ikhlas is mourning not just his brother but his brother-in-law and nephew, both of whom he says were also killed in the airstrike. He doesn’t know who to hold accountable.

“We’re civilian people,” he said. “We don’t know who is doing these sorts of things.”

US changes rules to allow direct attacks on Taliban

The US’s war against the Taliban was supposed to have finished by the start of 2015.  The troop force – roughly 100,000 at its height – was drawn down during the preceding years to a rump of about 10,000 who were mostly there to train Afghan security forces.  US planes continued to hit al Qaeda and Islamic State targets, but airstrikes against the Taliban were only allowed in self-defence.

There was one exception to this rule however: US aircraft were also allowed to pursue the Taliban when Afghan allies were “in extremis” – in practice meaning if major Afghan government positions were about to be overrun.

Unfortunately, this scenario became all too present a threat after the withdrawal of most US troops. The number of Afghan security forces being killed shot up nearly 30%. Last September, the Taliban took control of most of the provincial capital of Kunduz province. US commandos set out to help Afghan forces retake it, and American gunships scrambled to support them. In the fog of the ensuing battles, the US accidentally bombarded a Medecins Sans Frontieres hospital, killing 42 doctors and patients.

The Taliban’s rampage through provinces such as Kunduz and Helmand eventually triggered an adjustment of the US rules. In June, the US announced its forces would henceforth be allowed to attack the Taliban proactively.

This has resulted in an anomalous situation: a conventional aerial campaign but with virtually no American forces on the ground to provide reliable intelligence to guide it. The US has been left broadly dependent on the notoriously limited insights offered by drones and whatever their Afghan partners choose to tell them.

“Unless U.S. or coalition forces are engaged in direct combat, the eyes on (the target) are most likely from other aerial platforms or Afghan security forces”, said Chris Kolenda, a former US military commander in Afghanistan and co-author of a June paper for the Open Society Foundation on civilian casualties in the country.

“This increases the probability of errors. (…) It’s a much higher risk environment of fratricide, of civilian casualties…you know less about what’s going on.”

The security forces in Nad Ali had more reason than most to feel frustrated with the US and its partners in the Afghan government, even before the airstrike.

The Taliban was pushing in to the district centre, and Afghan security forces were struggling to keep them at bay.

Muhammad Gul, also a farmer, had a brother in the Nad Ali police force. His brother, Shadi Khan, worked so hard the family barely saw him, spending months at his post without a break. “He wanted to serve Afghanistan and its people,” Muhammad Gul recalled.

Earlier this summer, Muhammad Gul received a phone call from his brother, asking him to urge government officials to send him reinforcements.  Shadi Khan’s post had been under attack for almost 24 hours. When Muhammad Gul managed to get through to officials in Lashkar Gah, the provincial capital, “no-one cared”, he recalled.

A few hours later Muhammad Gul received another phone call from Shadi Khan. He knew he was about to be captured. He asked Muhammad Gul to send his regards to their parents, and to pray for him.

“It was his last phone call to us,” Muhammad Gul recalled.  “We never spoke to him again.”

When Muhammad Gul next saw his brother, his corpse – still in shackles – had been carried from the Taliban prison in Nad Ali to the police headquarters in Lashkar Gah.  Muhammad Gul remembers seeing five corpses there, two of them – including Shadi’s – in chains.

Sardar Muhammad, a veteran warrior who lost both his legs in combat, commanded one of the police force units fighting in Nad Ali.  He says requests for reinforcement from the Afghan government came to nothing when his men were bearing the brunt of a Taliban assault this summer. Eventually the Taliban overran the police post and captured three of his men, including Shadi Khan and Muhammad Rasul.  Altogether the Taliban were holding nine of Sardar Muhammad’s men in the Nad Ali prison at the time of the strike.

A video put out by the Taliban’s news network after the strike shows interviews with prisoners (a standard post-capture procedure) recorded before it occurred.  In the first batch of interviews the prisoners appear relaxed, and several say that they surrendered to the Taliban. They describe themselves as members of the security forces and Afghan army.

In the second batch of interviews the prisoners – which include Sardar Muhammad’s men – seem much more nervous. Shadi Khan, wearing a thin shirt, answers the questions cautiously, proffering no praise of the Taliban. Muhammed Rasul, a strong-featured young man with a thick moustache and purple tunic, frowns slightly as he answers the questions, simply stating that he used to man a post at the Haji Wardeen roundabout.

Sardar Muhammad said the families of his men were trying to get some form of compensation.

“Right now the families of my soldiers are here sitting with me, some are very angry and are asking me why they were killed and that I did not protect them,” said Sardar Muhammad.

“I saw the bodies of my soldier by myself when they were brought to the police headquarter in Lashkar Gah. The doctors were unlocking the locks and it was very painful to see them dead but also to see the chains and locks that were on their feet.”

The Taliban were quick to exploit the tragedy in Nad Ali, putting out a statement shortly after the strike saying that 22 members of the Afghan security forces had been killed.

In the video released by their news network, the Taliban claim that they were about to release the captives, a claim for which there is no supporting evidence.

The official line from the Afghan government in early media reports was that the Nad Ali strike had simply killed 24 members of the Taliban.

The governor of Helmand province, Hayatullah Hayat, later admitted that some of those killed might have been members of the security forces, but insisted that they would have been traitors who had started fighting for the Taliban.

“When we were doing our surveillance in the area we saw all the people in and around the base [were] armed,” he told the Bureau. “Therefore, we can say that all those who were killed in the attack were armed and to us it does not matter if they were Taliban, Pakistanis, or former solders now fighting for the Taliban.”

Muhammad Gul, whose brother was killed, chafes against the accusation.

“The fact was that my brother was still chained when we saw his body,” he said.  “It was very hard for us to hear our government accuse us like this.”

When the Bureau presented its findings to the US military, a spokesman referred queries to the governor of Helmand and said: “We remain confident that there were no civilian casualties or captives.”

A version of this story appeared in Newsweek. Click here to read it.