October 23, 2016 by Bureau reporter
Published in: Uncategorized
Tweet
Email this 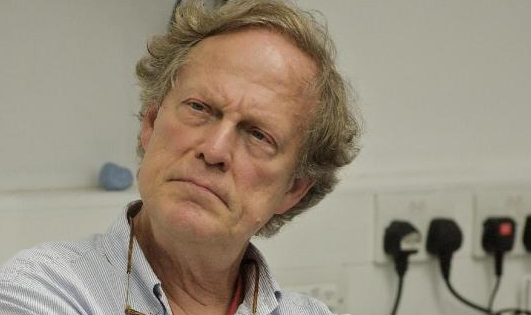 Gavin MacFadyen, director of the Centre for Investigative Journalism and adviser to the Bureau, has died after a short illness.

An investigative journalist for many decades, Gavin who died on Saturday October 22 at the age of 76, used his experience in later life to mentor and encourage those entering the profession.

Gavin was a strong believer in investigative journalism and was heavily involved in founding the Bureau in 2009. He was a committed supporter of the organisation and a long-serving member of its Editorial Advisory Committee.

But it was as the founder and director of the Centre for Investigative Journalism, a training and advocacy organisation that he was best known.

Through this role he trained and mentored many journalists working in difficult environments. He also worked with whistleblowers and became a powerful voice supporting the right of those prepared to leak information.

Before founding the CIJ Gavin was a documentary maker who produced and directed more than 50 films mainly for Granada Television’s World in Action.

At the Bureau, Gavin pulled on his years of experience to offer tireless support and was an important influence in the direction of the organisation.

Rachel Oldroyd, Managing Editor of the Bureau said: “I am deeply saddened by the death of Gavin. He was a generous supporter of the Bureau and his passionate belief in the ability of journalism to change the world was an inspiration to many who worked here.

“Gavin constantly challenged us to do the best journalism we could and to seek out the stories that really held those in power to account. His infectious energy and spirit was a true force for good, which will be missed. ”

James Lee, Chair of the Bureau’s board said: “It was Gavin that had the idea that sparked the creation of the Bureau. He was a source of inspiration to us all, the likes of which we are unlikely to find again.”

Elaine Potter, founder of the Bureau and Board Director

From the moment I joined the board of the Centre for Investigative Journalism (CiJ) of which Gavin was the founding director, Gavin and I talked of one day ‘doing the journalism’ beyond the training for which CiJ was renowned.

For six years I chaired the board and Gavin and I plotted how to achieve this. Lowell Bergman in California and Chuck Lewis in New York had set up significant not for profit investigative journalism organisations to address the growing and alarming deficit in the kind of journalism that was obsessed with probing the truth and holding the powerful to account.

In America a proliferation of such organisations was taking place. The arrival of ProPublica gave us the final push. As CiJ was at that time located at City University, we approached the head of the journalism school to see if there would be interest in a collaboration with a not for profit investigative journalism publication.

The answer was a resounding yes and so the process began of creating the Bureau of Investigative Journalism – long nights and days agreeing the name – elaborate preparations of the structures and the breakthrough start up gift of £2million from the David and Elaine Potter Foundation.

Gavin and I were as amazed as anybody could be that we had such an auspicious beginning. Thereafter the Bureau made its own way but Gavin remained an ardent and loyal inspiration, serving on the Editorial Advisory Board and spending the necessary time anguishing over everything.

Gavin could not have been a more exciting colleague to have. Passion, politics and curiosity were his greatest drivers. He never stopped engaging with the new, seeking and finding people and processes which no one else had ever heard of. He recognised the significance of Wikileaks and made contact from the moment they arrived on the Internet. He became obsessed with providing support for whistleblowers. He was a great enabler always encouraging and ardently supporting everyone who entered his orbit.

Another colleague, Anthony Barnett, founder of openDemocracy brilliantly summed Gavin up in a letter to me this week: “He was a real comrade in his rare and precious combative contempt for the ruling establishments of Washington and London…his unpredictable spirit always lifted mine.”

Anyone who knew Gavin at all would recognise him in this wonderful depiction of a man who attracted such admiration and deep affection as a colleague and an irreplaceable friend.