October 5, 2016 by Kjeld Hansen
Published in: Uncategorized
Tweet
Email this 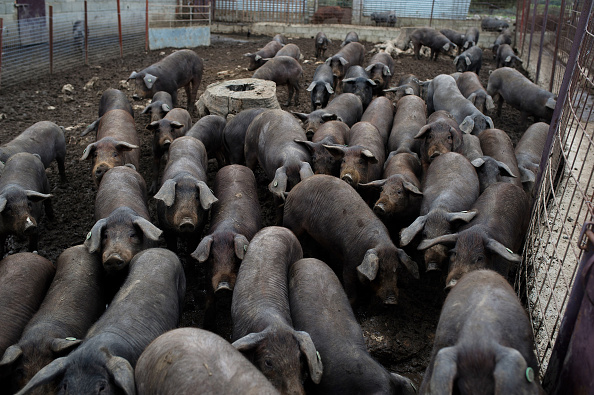 Every day 35,000 live pigs roll over Denmark’s border into Germany on heavily-loaded trucks, heading for countries across Europe. More than two thirds of them are likely carrying infectious Livestock Associated MRSA bacteria.

Once they arrive at their destinations they pose an immediate threat to the farmers and slaughterhouse workers who come in contact with the animals. These workers then pass the infectious bug on to their local communities.

The Danish pig industry accounts for 57% of the total live pig exports to other EU countries. It is the main source for the spread of LA-MRSA across the European Union.

Worse still is the fact that each year another 190,000 live Danish pigs are exported for breeding purposes. They are trucked, sailed or flown into 48 countries, including the UK, where they are incorporated in the top of the breeding pyramid.

At least 63% of these breeding pigs are infected with LA-MRSA, but buyers abroad are told nothing. Danish pigs are not checked for LA-MRSA before export, and Danish pig farmers have no obligation to report on LA-MRSA, when facing buyers.

Read the Bureau’s investigation: How superbug-infected pigs get into Britain unchecked

How did it go so wrong?

Since LA-MRSA was first discovered in Denmark back in 2006, the influential Danish pig industry has adamantly opposed proposals aimed at cleaning up production. Instead they insisted on secrecy.

When two journalists used the Information Act in 2012 to demand Food Ministry data listing which farms had been infected, the pig industry blocked the disclosure by taking legal action against the authorities. The battle lasted for two years and went all the way to Denmark’s highest legal authority, the Supreme Court, before this vital information was finally made public. I was one of those two journalists.

Since 2006 the LA-MRSA bug has spread rapidly, and today more than 12,000 Danish citizens are estimated to be carriers. Since robust screening procedures were introduced five years ago, six people are known to have died; there may have been more victims before 2011. But exports of infected pigs are still booming and will set a new record in 2016.

In Norway, the authorities and the pig industry united to fight the bug. It has now been brought under control and is heading towards extinction. The Danish pig industry and food authorities have dismissed the idea of doing the same. They openly claim that taking action against LA-MRSA will hurt the export industry’s profits. Therefore Danes – and the rest of the world – must learn to live with the bug.

Countries with a low rate of infection such as the UK can still save a clean and safe pig industry. But the time bomb is ticking. If you continue to import Danish breeding pigs with LA-MRSA you could go the same way as Denmark. It only took eight years for us to go from having no infected farms to nearly 100% being infected.

If the border is not closed to infected pigs, it will only be a matter of a few years before the entire breeding pyramid in the UK is infected. This will threaten all citizens. Some will die.

The solution is clear: Take action to ensure only healthy Danish pigs are allowed into the UK – before it is too late.