July 1, 2016 by Chris Woods
Published in: Uncategorized
Tweet
Email this 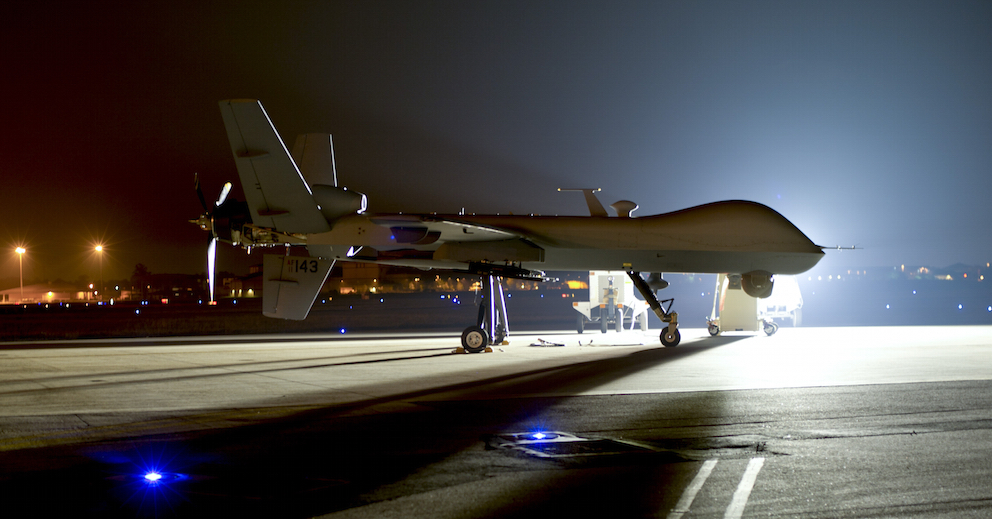 Armed drones became the symbol of US counter-terrorism policy under Obama (Picture: USAF)

Targeted killings or assassinations beyond the battlefield remain a highly charged subject. Most controversial of all is the number of civilians killed in US covert and clandestine drone strikes since 2002.

The new White House data relates only to Obama’s first seven years in office – during which it says 473 covert and clandestine airstrikes and drone attacks were carried out in Pakistan, Yemen, Somalia and Libya.

The US claims that between 64 and 116 civilians died in these actions – around one non-combatant killed for every seven or so strikes. That official estimate suggests civilians are significantly more likely to die in a JSOC or CIA drone attack than in conventional US airstrikes. United Nations data for Afghanistan indicates that one civilian was killed for every 11 international airstrikes in 2014, for example.

But for Obama’s secret wars, the public record suggests a far worse reality. According to Bureau monitoring, between 2009 and 2015 an estimated 256 civilians have died in CIA drone strikes in Pakistan. A further 124 civilians are likely to have been slain in Yemen, with less than 10 non-combatants estimated killed in Somalia strikes. Similar tallies are reported by the New America Foundation and the Long War Journal.

Related story: Obama drone casualty numbers a fraction of those recorded by the Bureau

So why have civilians been at greater risk from these covert and clandestine US airstrikes? Part of the answer lies in who the US kills. Many of those pursued are high value targets – senior or middle ranking terrorist or militant group commanders. Bluntly put, the higher the value of the target – and the greater the threat they represent to you – the more the laws of war allow you to put civilians in harm’s way.

The CIA also frequently missed those same high-value targets. A 2014 study by legal charity Reprieve suggested that US drone strikes in Yemen and Pakistan had killed as many as 1,147 unknown people in failed attempts to kill 41 named targets.

It’s also clear the CIA has been using a very different rule book. In an effort to lower civilian deaths in Afghanistan, international airstrikes on buildings and urban locations were mostly banned from 2008. Yet in Pakistan, more than 60% of CIA strikes have targeted domestic buildings (or “militant compounds”) according to Bureau research.

When President Obama apologised for the accidental 2015 killing of US aid worker Warren Weinstein, he revealed that the US had kept the target building under surveillance for “hundreds of hours” – yet had never known there were civilians inside. Many of the women and children credibly reported killed by the CIA in Pakistan have died in similar circumstances – though few of their deaths have ever been conceded.

Then there have been the more shocking tactics employed by the CIA. There was the deliberate targeting of funerals and rescuers, again first revealed by the Bureau. And the widespread use of so-called signature strikes during the Obama years – the targeting of suspects based not on their known identities, but on their behavioural patterns.

In the most notorious such incident, at least 35 civilians died when the CIA targeted a tribal meeting in 2011 – an action which significantly damaged US-Pakistani relations. None of those deaths appear have been included in the White House’s casualty estimates. Missing too are the 41 civilians – including 22 children – slain in a JSOC cruise missile strike on Yemen in 2009. These two events alone indicate more civilian deaths than all of those now admitted across seven years.

The CIA has long played down the number of civilians killed in its drone strikes. It was the Bureau which first challenged John Brennan after he claimed there had been no civilian deaths from CIA strikes for 15 months. The public record showed otherwise. Even leaked CIA documents demonstrated Brennan’s economy with the truth.

US Special Forces have also long hidden the true effect of their actions. Leaked cables obtained by Wikileaks revealed that under Obama, Centcom conspired with Yemen’s then-president to cover up US involvement in the deaths of civilians. And four years later, JSOC’s bombing of a Yemen wedding convoy led (anonymous) CIA officials to criticise the elite unit – even as the Pentagon publicly denied any civilian deaths.

Today’s official White House estimates should be read in the context of these continued evasions and untruths. Though welcome as a general step towards improved transparency – and with new rules which may reduce the risk to civilians – they do little to reconcile the continuing gulf between public estimates and official claims.

Chris Woods set up the Bureau’s award-winning Drones Project in 2011, and is the author of Sudden Justice: America’s Secret Drone Wars. He now runs Airwars, which monitors international airstrikes and civilian casualties in Iraq and Syria.