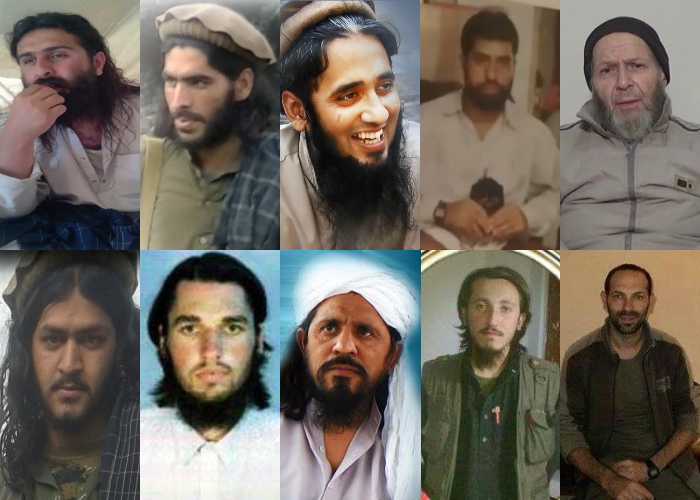 The 10 killed in 2015 for whom we have names, including Warren Weinstein (top right) and Giovanni Lo Porto (bottom right).

Just 10 of the scores killed by US drones in Pakistan last year have so far been identified, according to data collected by the Bureau’s Naming the Dead project.

The names for all 10 came from either terrorist propaganda or the US government, with officials from Pakistan’s government, military and intelligence services declining to provide any names of those killed by the CIA for the first time since strikes started in 2004.

Only a minority of those killed are ever identified, but the number of those named in 2015 was particularly low. In total, according to Bureau research, of the minimum 2,494 people killed by US drones since 2004, only 729 have been named. At least 1,765 victims remain nameless.

The Bureau’s Naming the Dead project is an attempt to identify more of these victims to better ensure accountability for the drone strikes. The CIA continues to carry out signature strikes in Pakistan – attacks on people it claims are terrorists from extensive surveillance and data analysis operations – but the targets’ names are often not known.

Of the 10 victims named, two were civilians: westerners Giovanni Lo Porto and Warren Weinstein, who were both aid workers taken hostage by al Qaeda when they were killed in a calamitous drone strike on January 15.

Five more were from al Qaeda and the remaining three were part of the Pakistan Taliban (TTP).

Of the 10, four names were provided by the US after weeks of CIA investigations, while the other six emerged from al Qaeda and TTP propaganda.

Little or nothing is publicly known about the remaining 50 people. Most were described as “militants” of varying nationalities by intelligence and government officials, and military officers who were quoted anonymously in Pakistani and international media.

In six of the 13 strikes in 2015, the unnamed sources labelled some if not all the people killed as “Uzbeks”.

In four more strikes, the dead were described by their affiliation to an armed group, such as a TTP faction under a specific commander.

Although Pakistani officials were happy to brief journalists throughout last year on the nature of the drone strikes and the nationalities or terrorist affiliations of those killed, it was the first time since 2004 they did not help in the identification process.

They have previously leaked the names of those killed.

It is unclear why 2015 was different. It could be that the identities of those killed were not known before Hellfire missiles struck and unless friends, relatives or comrades come forward their names might never be known.

Alternatively, victims’ names could have been caught in the information lock down put in place in the tribal areas by ISPR – the Pakistani military’s propaganda wing.

The Pakistani military has been fighting terrorists and other non-state armed groups in Waziristan since June 2014. Since then there has been a tight control on information released to the press about the campaign.

CIA drone strikes may be subject to the same strict information control.

Spies, officials and terrorist propaganda: How we get the names

It is not unusual for the those carrying out drone strikes – nor for communities on the receiving end – to give out the names of the dead, though they have never been the only sources of names.

Terrorist propaganda has been a rich seam for identities and background information. Similarly, intelligence service and government officials in Washington have also quietly revealed to reporters the names and potted histories of some of the senior terrorists killed in the strikes.

Pakistan’s premier spy agency, the ISI, may know the identities of many if not all of the dead. It is believed to have kept a record of the names of the people killed in the tribal areas, by drones and other means. Its officers have been sources of names of the dead in strikes from 2004 to 2014.

Why this stopped in 2015 is all the more confusing considering unnamed “Pakistani security officials” told the Express Tribune the first and so far only CIA strike of 2016 killed senior Taliban commander Maulana Noor Saeed, along with four others, on January 9.

Although the ISI enjoys a reputation for omniscience it is still possible even its officials do not know who died.

The same officials, intelligence officers and soldiers in Pakistan, however, told journalists the names of TTP and al Qaeda terrorists killed in US strikes across the border in eastern and southern Afghan provinces.

The Pakistani army has slowly worked its way across the tribal areas that run along Pakistan’s border with Afghanistan, driving the various armed groups deeper in to the mountains that run across the boundary separating the two countries.

Many of these fighters appear to have been forced across the border.

Afghan officials in Kabul and the provincial capitals also identified people killed in strikes in Afghanistan. The Bureau has recorded more than 100 names from over 700 people reported killed last year in Afghanistan.

The true death toll is higher. The Bureau’s tally of people killed relates to 187 US strikes in Afghanistan last year for which there are media or other open source reports. The US says it carried out 411 air and drone strikes in total. The US will not provide individual details on each of these attacks and most of them go unreported – leaving a considerable gap in public understanding of the ongoing US war in Afghanistan.

Update: This story’s featured image has been changed to include Qari Ubaidullah’s picture (centre, bottom row).

This story is part of the Bureau’s Naming the Dead project, which is funded by the Joseph Rowntree Charitable Trust.