December 1, 2015 by Jack Serle and Abigail Fielding-Smith
Published in: Uncategorized
Tweet
Email this 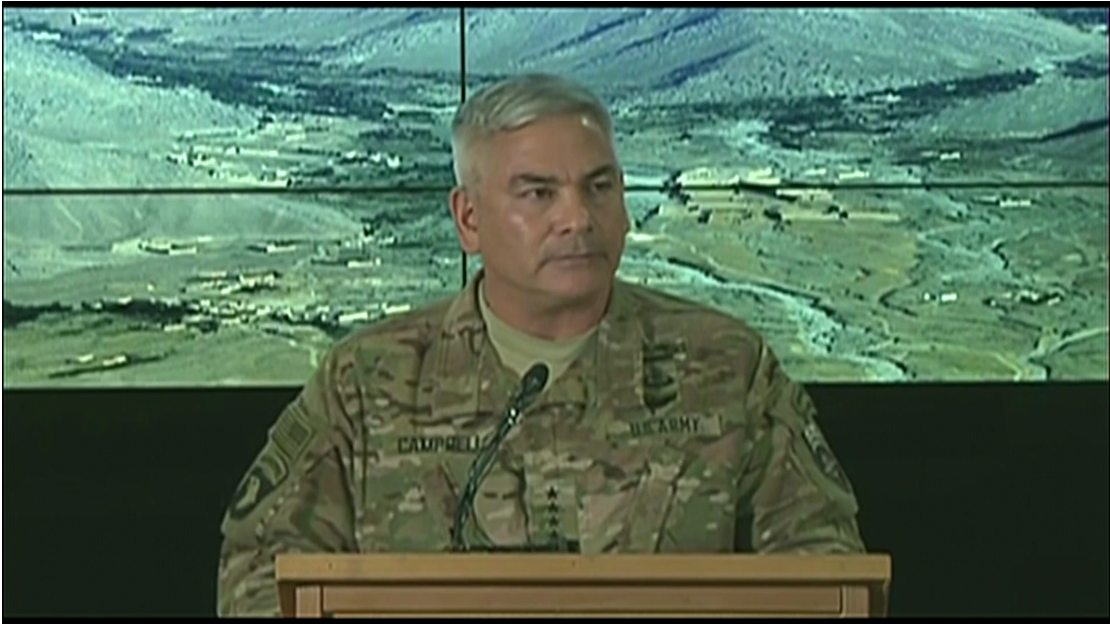 Gen John Campbell, top US military officer in Afghanistan, admits human error behind the destruction of a hospital on October 3.

US strikes continued in Afghanistan and Somalia last month. Strikes in both countries were carried out to counter a threat to US forces on the ground. There were no attacks reported in Pakistan, where the Pakistan Air Force continues bombing the tribal areas, or in Yemen where the Saudi-led coalition’s aerial bombing campaign continued.

All the strikes in the table above were carried out by the CIA using Predator or Reaper drones. The Pakistan Air Force has also carried out air strikes in the same region as the CIA, using jets and its own armed drone – the Burraq.

November was the second consecutive calendar month without a reported US strike in Pakistan.

Despite this halt in CIA drone strikes, US air operations continue across the border in Afghanistan and the impact is being felt in the tribal areas of Pakistan. On November 20 details emerged of several funerals for people killed in US air strikes in Afghanistan. These ceremonies, held in various districts of the Khyber Pakhtunkhwa province, were reportedly attended by thousands of people.

You can download the Bureau’s complete datasheet of CIA drone strikes in Pakistan here.

The US Air Force has a variety of aircraft carrying out missions over Afghanistan, including jets, drones and AC-130 gunships. The UN reported in August 2015 that most US strikes were by unmanned aerial vehicles. This matches the Bureau’s records that show most US air attacks since January were by drones. However in the absence of US authorities revealing which type of aircraft carried out which attack, it remains unclear which of the attacks recorded were by manned or unmanned aircraft.

The Bureau recorded nine US strikes in Afghanistan in November. This is a dramatic fall from the 82 recorded in October. It is not yet known if this is an actual fall, or possibly a sharp decline in the number of strikes publicly reported.

The total number of attacks carried out by US forces in November will be released by the US government at some point in the second week of December.

In November fresh details emerged of the October 3 US air strike on the Kunduz hospital. General John Campbell said the attack was “the direct result of avoidable human error, compounded by process and equipment failures”.

The US will publish a redacted copy of the national investigation, according to US Army Colonel Michael Lawhorn, US Forces – Afghanistan spokesman. Though “that process could take some weeks.”

The Bureau’s complete timeline of reported events in Afghanistan can be found here.

There were no US drone strikes reported in Yemen in November, the second calendar month this year without a reported attack.

The multi-faceted civil war in Yemen continued regardless of a halt in US strikes. Concerns over collateral damage in the Saudi-led coalition’s aerial campaign against the Houthi militia continued to build. Amnesty International and Human Rights Watch said on November 25 they had tracked a missile used in one deadly attack on a ceramics factory back to a British manufacturer.

The Houthis were also criticised, with a senior UN official accusing them of blocking the delivery of urgently needed humanitarian and aid supplies to the city of Taiz.

You can download the Bureau’s complete datasheet of US drone and air strikes in Yemen here.

The first strike in Somalia since July killed at least five people on November 21, according to three Somali government officials and local residents. The US confirmed its forces “conducted a self-defense airstrike against al Shabaab”.

Also last month, the US announced it was offering rewards for information about six al Shabaab fighters totalling $26m. The men included the new leader of the terrorist group, Abu Ubaidah, and his deputy, Mahad Karate (above).

You can download the Bureau’s complete datasheet of US drone and air strikes in Somalia here.