October 29, 2015 by Victoria Parsons
Published in: Uncategorized
Tweet
Email this 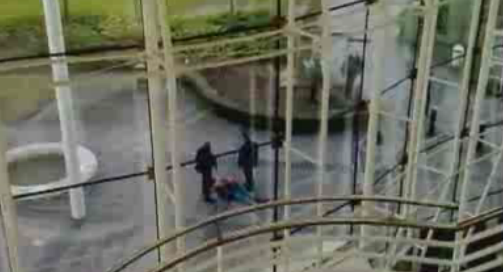 Two Pakistani men alleged to have been part of an al Qaeda plot to blow up Manchester’s Arndale shopping centre six years ago have launched a court battle to overturn a Government ban on them re-entering Britain.

Rizwan Sharif and Umar Farooq, now living in Pakistan, yesterday began a judicial review of a Home Office decision to exclude them from the UK, a banning order that came months after the terror case against them collapsed due to lack of evidence.

Yesterday, a judge described the evidence he had so far seen underpinning the exclusion order as “threadbare”.

The pair were among 12 mostly foreign students arrested as part of controversial Operation Pathway in April 2009. Memorably, the police raids in Liverpool, Manchester and Lancashire had to be rushed forward at the time after then Assistant Commissioner Bob Quick of the Met Police’s counter-terror squad accidentally allowed details of the operation to be photographed as he arrived for a Downing Street briefing.

The 12, all but one of whom were in the UK on student visas, were alleged to have been part of a plot to detonate a bomb at the busy Arndale Centre in Manchester during Easter 2009. It emerged MI5 had been tracking their movements for weeks.

No bomb was ever found and the British case against the 12 collapsed within a fortnight. No UK charges were ever brought.

Of the 12, only Abid Naseer, the alleged ringleader, was ever convicted – but that was in the US earlier this year. After the UK case collapsed, Naseer was extradited to the US in 2013. He was prosecuted under a law that allows US authorities to pursue terrorism cases even if they take place overseas. He was found guilty by a Brooklyn court eight months ago for plotting terror operations in Manchester and New York.

Of the 11 others, one was a British national who was freed, one was an Afghan who was deported because he had been in the UK illegally, while nine faced deportation proceedings to Pakistan. A number of those left the UK voluntarily, after which the Home Secretary signed exclusion orders that banned them returning.

Farooq, now 31, and Sharif, 32, had been two who left voluntarily in September 2009. They maintained their innocence but were later excluded by the Home Secretary on the grounds their presence in Britain was not conducive to the public good. The Home Office yesterday told the Bureau that due to the ongoing case it was unable to clarify whether it was Theresa May or her predecessor, Labour’s Alan Johnson, who signed the order in 2010.

The three-day hearing at London’s Special Immigration Appeals Commission (Siac) is being covered by the Bureau of Investigative Journalism as part of its long-running examination of the use of secret evidence in counter-terrorism cases, such as citizenship stripping.

The two men, who have been giving evidence via video link, say they were not aware of their legal rights to challenge the exclusion orders five years ago, a major reason for the delay in bringing the judicial review.

Siac judge Mr Justice Mitting is considering whether the Home Secretary had sufficient evidence to exclude them or whether it was a decision made in error, based on incomplete or inaccurate facts.

Some of the evidence is deemed so sensitive to national security that it is being heard in closed court sessions.

But after hearing several hours of evidence in open session yesterday, Mr Justice Mitting said that based on what he had seen so far, “the reasons for saying the decision should be maintained are threadbare”.

He said: “We have to ask ourselves [in the closed proceedings] if there’s an innocent explanation for what the Secretary of State relies on.”

In evidence yesterday, Farooq and Sharif said they had met Abid Naseer only once – at a house party. They said they spoke different languages and had completely different interests. While they enjoyed cricket, clubbing and food, they said he seemed “serious” and “religious”.

Jonathan Hall QC, for the Home Secretary, asked Farooq what had been his impression of Naseer.

Farooq, an Urdu speaker, replied: “What I remember about Abid Naseer…one thing I noticed is his long beard which is unusual in UK. He spoke Pashto. I don’t understand Pashto.”

Farooq replied: “I didn’t know. They were cricket players. They used to come round for food.”

Much of today’s evidence was heard in closed proceedings, with Farooq, Sharif and their lawyers excluded from the courtroom.

Stephanie Harrison QC, for the two men, yesterday said this was a “handicap”.

She said: “How can the court decide if material is incomplete, inaccurate or misleading if the person it refers to is excluded from seeing it?”

In her closing statement today, she said the Home Secretary made “a fundamental error in assessment”, adding: “You are making a decision of extreme gravity with serious consequences for the individuals you’ve made it on…you need to have a cogent basis to conclude that an individual has involvement in some capacity in a plot that was intended to cause mass casualties.”

The Home Secretary argues that the exclusion decision was based on the future risk the appellants posed to the national security of the UK.

Mr Justice Mitting said that if the Secretary of State had accepted evidence from the security services that was incorrect there was no question of assessing the appellants as posing a future risk.

The relationship of Abid Naseer to the other 11 men arrested in 2009 appears to have been central to UK security service worries. Now aged 29 he is in a US jail having been convicted in March for terror offences including a plot to blow up the Arndale Centre six years earlier.

When he was convicted eight months ago, there were demands for the UK’s Crown Prosecution Service to explain itself. Why was it unable to press charges in the UK in 2009, senior policing figures asked? In response, the CPS repeated its line that “evidence in our possession…which would have been admissible in a criminal court [in the UK] was very limited.

“Crucially, there was no evidence of training, research or the purchasing of explosives. We had no evidence of an agreement between Abid Naseer and others which would have supported a charge of conspiracy in this country.”

MI5 had produced evidence of what they said were coded emails between Naseer and an overseas al Qaeda commander in which a bomb plot was discussed.

Rizwan Sharif and Umar Farooq admitted meeting him – at a party and just the once. But the security services insisted they had more evidence. However, that evidence has never been made disclosed to the public, or even to the two men themselves.

Exclusion decisions prevent people from returning to or entering the UK. The Home Secretary makes them against individuals who are ‘not conducive to the public good’; in many citizenship stripping cases where the individual is abroad an exclusion decision against them will also be made. There is no right of appeal except by way of judicial review.

A version of this story was published with the Independent