October 2, 2015 by Jack Serle and Alice Ross
Published in: Uncategorized
Tweet
Email this 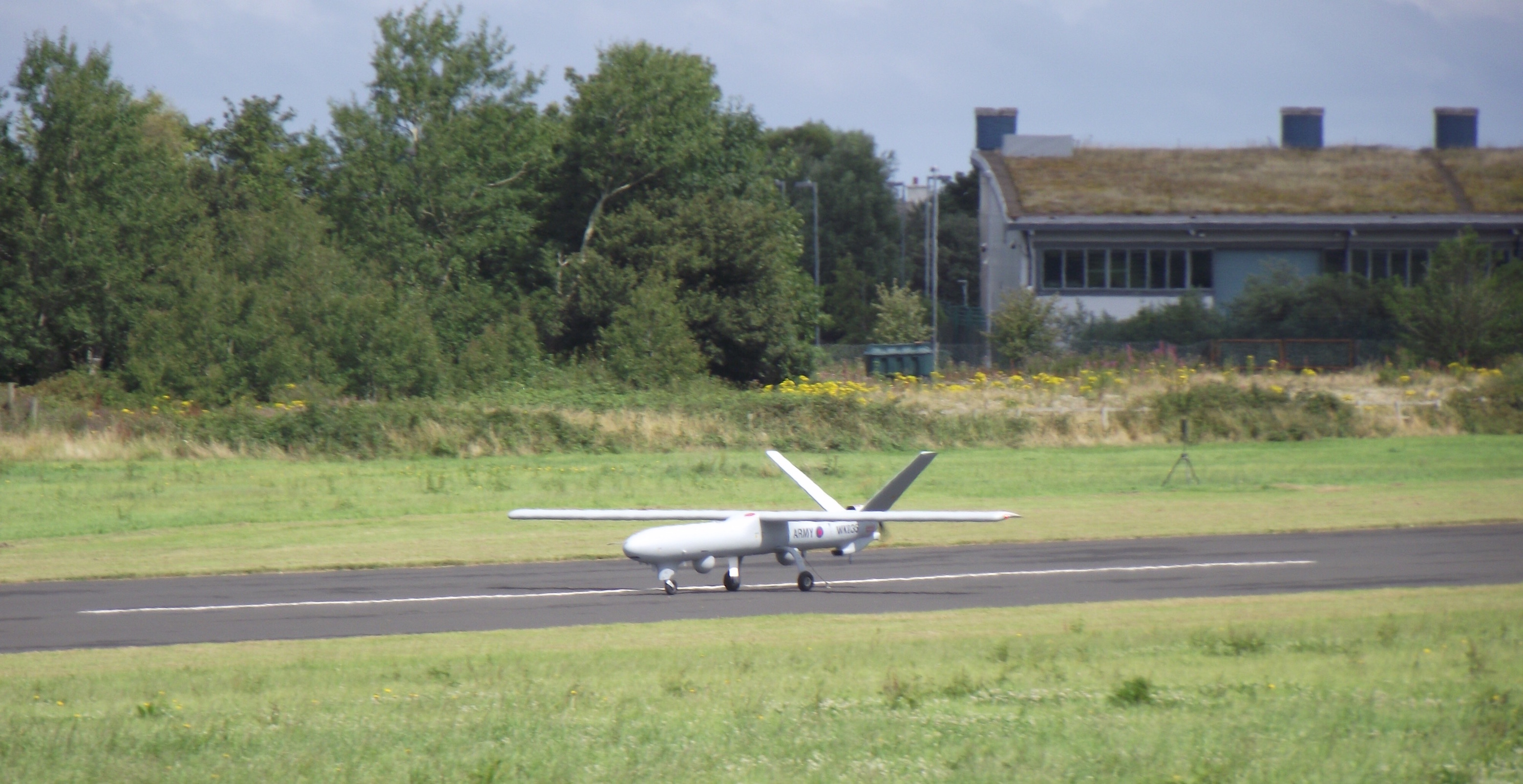 A landmark Ministry of Defence order for 54 battlefield drones that was hailed by ministers a decade ago as an “affordable solution” will be four years late and cost £1.2bn – some £400m more than the public was first told.

The order for the Watchkeeper drones was announced by former Defence Secretary John Reid at the height of the wars in Iraq and Afghanistan in 2005 when he agreed costs of £800m and told Parliament they would start being ready for service five years later.

He also told taxpayers the bespoke order – Britain’s biggest ever on drones – would be “key to battlefield surveillance of the future” and a major boost to the country’s long term involvement in the technology.

Yet 10 years after the contract with a consortium led by French defence giant Thales was signed, only 33 of the fleet have been delivered.

In all, only three have actually been used in active operations – belatedly in Afghanistan just weeks before the troop withdrawal of late 2014, and for a total of 146 hours, equivalent to two days’ flying each.

At the end of June, those three were among only eight under Army control – at Boscombe Down on the Salisbury Plain where they are now used for training. Twenty-one were at a testing centre in west Wales, where most were boxed up in MoD storage.

Since June, four more have been delivered by Thales to the MoD.

The Bureau investigation – carried out in collaboration with the Guardian – into the UK’s most ambitious drone programme comes three months after David Cameron tasked defence chiefs to examine how drones could help defeat ISIS.

But the current nature of the conflict in Iraq and Syria means it is unlikely Watchkeeper will be deployed there. Whereas other drones such as Reaper – which are flown by the RAF – are operated by satellite and can be controlled thousands of miles away, Watchkeeper is piloted by radio signals, so requires troops on the ground close by.

Whether Watchkeeper could be currently deployed in any great number even were there to be troops on the ground is also open to question.

The Bureau has learnt through a Freedom of Information request that the Army has only six Watchkeeper pilots trained to fly the drones. Military commanders expect to have 24 pilots ready by 2017, while at the peak of its future operations in “following years”, they would like 100 in “operational, instructional and assurance roles”.

Instead of all 54 being ready by April 2013 as first planned, software glitches, stricter aerospace regulations and Army staff shortages have meant the latest date for “full operational capability” is now 2017 at the earliest – a delay of at least four years.

Even hitting that target “will require considerable further development”, the MoD has conceded.

That admission was buried in a spreadsheet compiled by the MoD for the Cabinet Office’s annual Major Projects Authority report, published in June.

The spreadsheet also states the estimated cost for the Watchkeeper project now stands at £1.2bn.

“The capability is still in development and will require considerable further development to reach the Full Operating Capability in 2017,” notes contained in the spreadsheet reveal.

The figure of £1.2bn includes the £800m announced by the MoD in 2005 – which consisted of a proposed £700m to Thales and a further £100m of Government capital costs – plus bills incurred during the pre-contract assessment phase, other elements caused by the various delays and setbacks over the years, plus charges from the drones’ deployment in Afghanistan.

The MoD says it is “wrong” to compare the two figures but a spokesman was unable to say how much will eventually be paid to Thales for the entire project, or even what has been paid to the consortium to date.

The MoD has also incurred other costs as a result of the delays.

Ordered at the height of the Afghanistan war, Watchkeeper, which does not carry weapons, was designed from scratch for the Army, with the aim to provide aerial surveillance for troops on the ground.

But the inability to place the drone into service until 2014 exacerbated a “capability gap” for military commanders in Iraq and Afghanistan who had been forced to lease nine Hermes 450 drones from Israeli aerospace firm Elbit.

The Bureau has discovered that the total cost of that deal, which ended last January, was £206m over seven years.

Colonel Richard Kemp, who led Britain’s first Army presence in Afghanistan in 2003, said Watchkeeper was “just the latest of a string of examples of overdue and overcost defence equipment projects”.

He said the drone was “an essential element of British forces’ surveillance, command and target acquisition capability”, adding: “Without it our ability to fight is severely degraded.

“The lesson here must be that we should be far more willing to purchase proven off the shelf solutions, especially those developed by the United States, rather than always insisting on our own bespoke technology.

“Only too often in defence procurement the perfect is the enemy of the good. And there is no point striving for perfection if it arrives too late to actually do the job.”

An MoD spokesman said: “Watchkeeper has already proven its value in Afghanistan and will provide the British Army with a cutting edge remotely piloted air system.”

A Thales spokesman said “significant improvements to aircraft safety regulations and certification in the UK” had added to the delays. “Watchkeeper is the first and only UAS [unmanned aerial system] of its type to have undergone the rigorous testing and certification demanded in this improved regulatory landscape,” he added.

The demand for Watchkeeper was borne out of the need to replace the Army’s Phoenix drone, a piece of British-built equipment considered so poor it was widely known among military personnel as “the Bugger Off” due to its frequent failure to return from missions.

Phoenix cost taxpayers £345m and flew its final mission in Iraq in 2006.

Watchkeeper was an attempt to bring cutting edge technology to Army operations in Afghanistan and Iraq.

Its specifications impressed military chiefs. Its reinforced landing gear means it does not need tarmac runways and it can instead use rough airstrips deeper into battlefield operations where troops would have sophisticated surveillance technology watching over them.

Its ability to carry two sensors, one providing TV and infrared camera feeds and the other carrying sophisticated radar systems, gave it an advantage over other drones such as Hermes, which could only carry one kind of pod at a time.

But despite a senior Army officer claiming at this year’s Paris air show that Watchkeeper provides a “step change in intelligence gathering”, its limited range of 140km, which requires it to have troops on the ground in control stations, means it has never been used against Isis.

First conceived in 2000, the contract to develop and build Watchkeeper was awarded five years later to the consortium between Thales and Elbit.

It has been on the radar of Whitehall’s public spending watchdogs ever since. Even the assessment phase to choose a winning bid to supply surveillance drones went over budget by £13m to £65m, according to a National Audit Office report in 2009.

The government is spending £1.2bn on an asset that can’t be used in the kinds of wars we’re now fighting – Chris Woods

In 2008 the MoD told the Defence Select Committee the project would be delivered early and under budget.

Watchkeeper was meant to have its maiden flight in the UK at the end of 2009, but this was delayed until April 2010 when the first of the drones were actually supposed to enter service.

A 2011 National Audit Office report that examined the delays outlined a series of technical problems with the drone’s “core software providing all mission functionality”.

There were also reportedly problems with the automatic take-off and landing system.

The project then missed a revised “in service date” of 2012 before finally being given the green light in the UK in March 2014.

The MoD will continue using the Watchkeeper drones for training as well as testing and development at Parc Aberporth in west Wales.

Justin Bronk, an analyst at the military think tank Rusi, said Watchkeeper “was certainly procured with an eye to the last war”. He said it fills “a very interesting middle ground between the micro reconnaissance [drones]… that the army use, British and US, and the kind of large… Global Hawks and Reapers and Predators that the Air Force use”.

He added: “There is an operational niche for it but whether it continues to be funded long term is another matter.”

Drones expert Chris Woods, author of Sudden Justice, said: “The government is spending £1.2bn on an asset that can’t be used in the kinds of wars we’re now fighting.”

Alice Ross is a Guardian journalist, who was formerly the lead reporter on the Bureau’s award-winning drones project

* This article was changed on October 16 2015 to clarify that Watchkeeper can carry a TV and infrared camera and a radar sensor pod, unlike other drones which can carry one or the other.