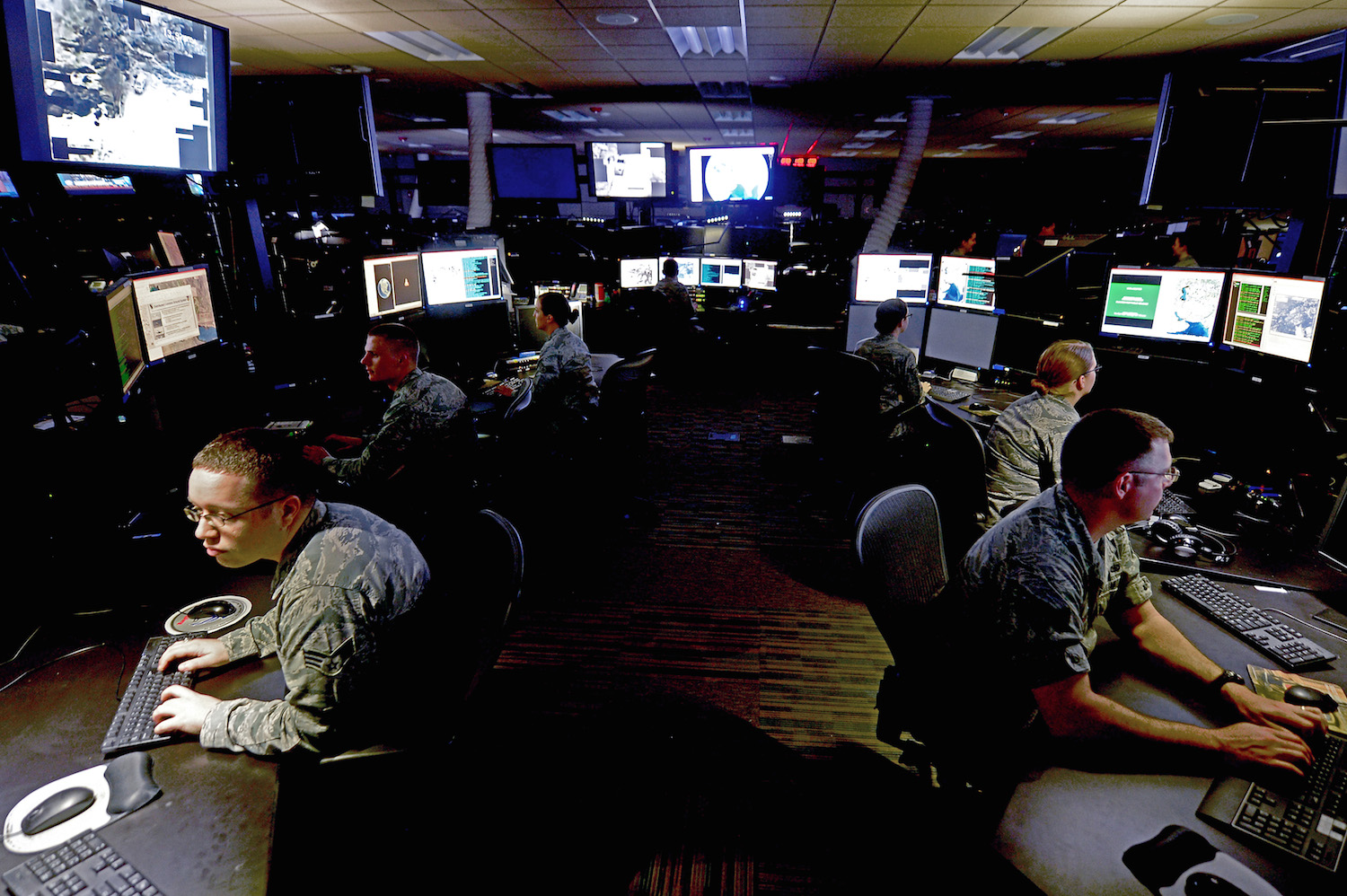 The overstretched US military has hired hundreds of private sector contractors in the heart of its drone operations to analyse top secret video feeds and help track high value terror targets, an investigation has found.

Contracts unearthed by the Bureau of Investigative Journalism reveal a secretive industry worth hundreds of millions of dollars, placing a corporate workforce alongside uniformed personnel, analysing battlefield intelligence.

While it has long been known that US defence firms supply billions of dollars’ worth of equipment for drone operations, the role of the private sector in providing analysts to comb through military surveillance video has remained almost entirely unknown until now.

Approximately one in 10 people involved in the effort to process data captured by drones and spy planes is estimated to be non-military. And as the rise of Islamic State fuels what military commanders describe as an “insatiable demand” for intelligence, surveillance and reconnaissance (ISR), the Air Force is considering a further expansion of its contractor workforce, a spokeswoman confirmed.

Some individual analysts even publicly advertise their skills on sites such as LinkedIn, with one boasting of helping with the “kill/capture of high-value targets”.

The US dependence on armed contractors in Iraq and Afghanistan has attracted close scrutiny, partly because of the notorious 2007 incident in which employees of the company then known as Blackwater killed 14 civilians in Baghdad. But the use of private companies to analyse military surveillance video has so far happened largely under the radar.

The contractors review live footage gathered by drones and spy planes hovering above battlefields, and help uniformed colleagues decide whether people they spot are potential enemies or civilians.

Though private contractors don’t formally take life and death decisions – only military personnel pilot armed drones and take final targeting decisions – there is concern they could effectively creep in to this function without more robust oversight.

Even now, contractors are aware that any errors of analysis they make could lead to the wrong people being killed.

“A misidentification of an enemy combatant with a weapon, and a female carrying a broom can have dire consequences,” one told the Bureau.

The ability to transmit live footage from above the villages and towns its enemies move through has become central to the US war machine, and the Air Force has struggled to keep up with demand for it. Each day, armed and unarmed drones and surveillance planes gather 1,100 hours of video data – all of which needs to be analysed.

Most of the time the imagery analysts are conducting long-term surveillance – establishing what constitutes ‘normal’ in a particular place. Some analysts monitor images as they unfold in near-real time, while others scrutinise individual shots more closely to make sense of them.

In so-called “kinetic” situations – those that entail lethal force – the assessments passed on by the analysts can affect whether or not someone on the ground is seen as a threat.

Missions include long-term surveillance of suspected militants and their resources – known in military jargon as “high-value targets” – and gathering intelligence for special forces or standard military operations on the ground.

Almost exclusively ex-military, contractors say they are more experienced in what they are looking at than their uniformed counterparts, who are frequently moved between different posts.

One contractor suggested to the Bureau that at times their skills place them effectively within the military chain of command.

“It will always be military bodies or civilian government bodies as the overall in charge of the missions…however you will have experienced contractors act as a ‘right-hand man’ many times because typically contractors are the ones with subject matter expertise, so the military/government leadership lean on those people to make better mission related decisions,” the analyst said.

Through analysing and cross-referencing millions of federal spending records, military contracts, interviews with current and former contractors and online job ads, the Bureau has identified 10 companies that have supplied the US government with imagery analysts in the past five years.

The contracts identified relate only to operations of the conventional military and special forces. CIA contracts, which cover the agency’s controversial operations in Pakistan and Yemen, remain classified, so any role of the private sector in that sphere remains unknown.

The companies involved are a mixture of large defence contractors and smaller tech and intelligence-focused firms, and offer imagery analysis alongside other services ranging from logistics to translation.

Among the largest known users of imagery analysis contractors are branches of the Special Operations Command, which conducts drone operations and supports commando raids on the ground. The May 16 swoop on Islamic State commander Abu Sayyaf, in which Sayyaf was killed and his wife captured, was supported by Predator surveillance, according to media reports.

According to a copy of the contract obtained under the Freedom of Information Act, Zel is providing over 100 imagery analysts. The contract also required Zel to provide experts “in the areas of the Horn of Africa, Arabian Peninsula, Somalia, Syria, Iran, North Africa, Trans-Sahel region, Levant region, Gulf states, and territorial waters”.

Meanwhile L-3 Communications won an imagery analysis contract with Special Operations Command (Socom) in 2010 which was to earn it $155m over five years.

Booz Allen Hamilton, which has been given a contract for supporting special operations, posted a job advert calling for personnel “providing direct intelligence support to the Global War on Terror”. British defence company BAE Systems has advertised for video analysts to be “part of a high ops tempo team”.

Laura Dickinson, a specialist in military contracting at George Washington University Law School, called for the Pentagon to make more information available about the role and scope of private contractors in drone operations.

“The issue is not that some contractors may be doing imagery analysis.  The problem is the ratio of contractors to government personnel.  If that ratio balloons, oversight could easily break down, and the current prohibition on contractors making targeting decisions could become meaningless.”

HOW BUREAU IDENTIFIED THE PRIVATE SECTOR’S INVOLVEMENT: OUR METHODS

The Bureau of Investigative Journalism contacted all contractors named in this story with a series of questions. None provided a statement, though several directed queries to the US military.

The Pentagon and the Air Force were also contacted for comment with a series of questions about transparency and oversight for contractors involved in ISR.

A spokeswoman for the Air Force said ISR was “vital to the national security of the United States and its allies”, and that it was in “insatiable demand” from combatant commanders. She said this demand was the reason for increasing use of contractors, which she said was a “normal process within military operations”.

On the issue of whether private contractors’ assessments risk pre-empting the military’s official decisions, she said the service had thorough oversight and followed all appropriate rules.

“Air Force DCGS [Distributed Common Ground System] works closely with the Judge Advocate’s office to ensure a full, complete, and accurate understanding and implementation of those roles. Oversight is accomplished by Air Force active duty and civilian personnel in real time and on continual basis with personnel trained on the implementation of procedural checks and balances.”

*A version of this news story was also published in the Guardian.

British companies have earned more than $60bn from US military contracts since President Obama came to power seven years ago, a Bureau analysis of Pentagon spending has found.

The official did not detail what kind of material companies were producing for the Pentagon, saying only that the “robust online program” operated using “truthful information directed toward regional audiences to combat ISIL’s (Islamic State’s) lies and deception.”

The Pentagon gave a controversial UK PR firm over half a billion dollars to run a top secret propaganda programme in Iraq, the Bureau of Investigative Journalism can reveal.