April 16, 2015 by Rachel Stevenson
Published in: All Stories, Joint Enterprise
Tweet
Email this 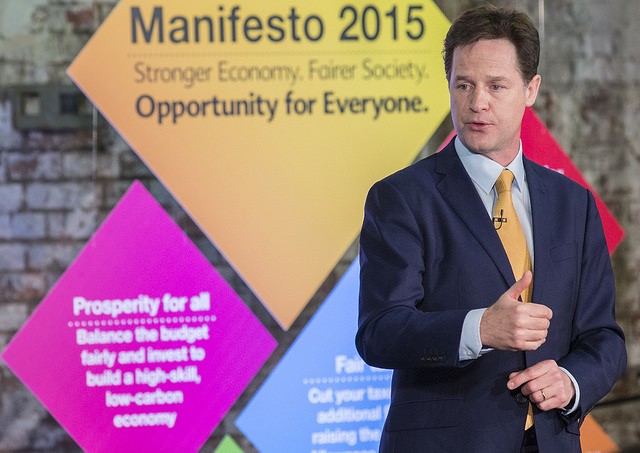 The  Liberal Democrats have pledged to reform the law of joint enterprise if they get into government following the general election, saying the common law doctrine has become “discredited” and needs to change.

The promise was included in the Lib Dem manifesto, published yesterday, as part of a proposed Freedoms Act, which the party says would “protect citizens from an excessive state”.

Joint enterprise is often used in murder cases, particularly in crimes involving young people and gangs. But in recent years there have been growing concerns that it is used too widely, and that people too remote from a crime are being unfairly sentenced to life imprisonment.

Concerns about joint enterprise were highlighted last year in a report by the Bureau of Investigative Journalism. Several leading figures of the judiciary had told the Bureau that joint enterprise may be causing injustices. It was the Bureau’s report which prompted the Commons Justice Committee to launch a second inquiry into the issue last year.

That inquiry recommended an “urgent review” of joint enterprises, particularly in murder cases, but now the Lib Dems have gone one step further.

Simon Hughes, a senior Lib Dem and current junior Justice Minister, told the Bureau yesterday that joint enterprise had become “discredited”. He said: “It sweeps into serious criminality people who are marginally associated with the activity that led to the situation in the first place and it disproportionately affects young black and ethnic minority men. It’s very clear the law needs to be changed.”

What is Joint Enterprise?

Joint enterprise is most controversial in a case in which two or more people participate together in one crime and in the course of it, one of the group commits a second crime which the other(s) foresaw he or she might commit.

When this involves murder, joint enterprise does not require proof that the defendant intended someone to die or that they directly took part in causing the death. The prosecution only has to prove that the defendant foresaw that one of the group might intentionally cause someone else serious bodily harm, and then the defendant can also be found guilty of murder.

In recent years this “foresight test” has led to the concerns that people too far removed from the actual murder are being sentenced to life imprisonment.

The justice committee recommended the government instruct the Law Commission carry out an urgent review of joint enterprise in murder cases, looking particularly at whether the threshold of culpability for secondary parties is too low.

Hughes told the Bureau: “There have now been two investigations by the Justice Select Committee and both inquiries have made clear that reform is needed. A number of judges have also made clear their unhappiness with the law and I know of some constituency cases where there are strong feelings of injustice for convictions under this law.”

The Lib Dems have now gone a step further than the recommendations of the committee, pledging to reform the law. Hughes said: “This is an express commitment that there has got to be reform. It is a complex area of law and therefore we would ask the Law Commission to provide a review. We would seek their advice to route to reform that was legally watertight.”

Lib Dems at odds with Conservatives

The pledge is a point of difference between the Lib Dems and their previous coalition partners in government, the Conservatives. In February the government rejected the justice committee’s recommendation to carry out a review. Tory Justice Secretary Chris Grayling dismissed concerns about joint enterprise, saying ‘“the law certainly does not criminalise innocent bystanders as has been portrayed in some sections of the media”.

He said victims’ families would be concerned if “changes suggested by academics” meant certain offenders could no longer be prosecuted for murder.

Polls currently predict a hung parliament following the general election on May 7. In the event of being involved in another coalition government, Hughes said the Lib Dems would “push hard” to get legislation to reform joint enterprise passed.

He added: “The Conservatives do not want to change the law. But we expect a majority in Parliament will want reform and we would get on the process as soon as possible.”

No official record of when joint enterprise is used in a prosecution is currently kept by any official body. The Bureau’s eight month in-depth investigation into joint enterprise produced the first comprehensive picture of how often the doctrine has been used in homicide prosecutions.

As well as evidence on the number of prosecutions using joint enterprise, the Bureau also found concerns about the use of joint enterprise among senior members of the judiciary.

The Bureau also tracked growing concerns about the use of joint enterprise through a survey conducted with City University London’s Centre for Law, Justice and Journalism in which 37 criminal barristers and solicitors said they were concerned about joint enterprise.

Lord Chancellor says it is not appropriate for current government to make decisions about controversial law.

Concerns that too many people might be getting wrongly dragged into murder prosecutions.