February 19, 2015 by Melanie Newman
Published in: Uncategorized
Tweet
Email this 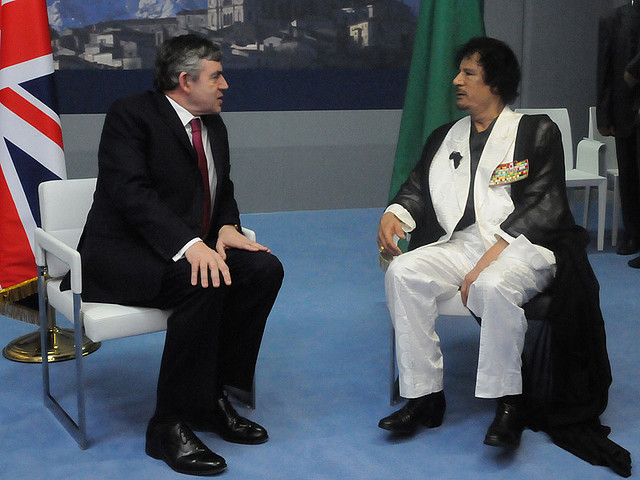 Gordon Brown with Colonel Gaddafi in 2009, a year after UK wrongly branded Abdulbasit Abdulrahim, an enemy of Libya, a terrorist

EU member states have voted to allow secret evidence to be used for the first time in one of Europe’s highest courts.

All but one of the EU’s 28 countries agreed to let the General Court of the EU to consider evidence, including from intelligence agencies, in closed sessions.

Only Britain abstained after it demanded more assurances that any sensitive evidence it hands over would be safeguarded.

The vote by the Council of Europe was carried on February 10, just four weeks after the very same court ruled that Briton Abdulbasit Abdulrahim had wrongly been designated a terrorist by both the EU and the UN on the basis of flawed UK government intelligence.

Under a regime of secret evidence, it could have been much harder for Abdulrahim to clear his name.

Related story: UK’s use of secret evidence in courts a ‘threat to the rule of EU law’

The General Court of the EU hears claims for damages against the EU as well as applications by organisations and individuals to be taken off sanctions lists.

People end up on such lists following decisions made at the UN.

National governments submit requests in secret to the Security Council’s Sanctions Committee for an organisation or individual to be added to the UN sanctions list.

If there are no objections within the committee within a specified timeframe, the nomination succeeds.

The Security Council only publishes a short “narrative summary” of the reasons for including someone on a list.

In the case of Abdulrahim, who was born in Libya before coming to Britain as a refugee in 2002 and who still lives here, he was designated a terrorist by the UN in 2008.

That decision came after the Foreign Office sent the UN a letter dated November 2008 which said he was a member of the Libyan Islamic Fighting Group (LIFG) and that that LIFG was associated with Al Qaeda.

He was then added to the EU sanctions list, meaning his assets in the UK were frozen and a travel ban was imposed.

Abdulrahim has argued ever since that he never had anything to do with terrorism. He said he was included on the list simply because he was opposed to Colonel Gaddafi and that he was a member of a wider community of Libyan refugees, among whom were suspected terrorists.

He maintains he fled Libya because his opposition to Gaddafi meant his life was in danger, which was why he was granted asylum in the UK.

He had joined the LIFG in 1996, because it also opposed Gaddafi, but ended his involvement with it in early 2001.

His argument that the LIFG posed no threat to the UK at the time of his involvement was supported by two High Court judgments and one from the Special Immigration Appeal Commission, the General Court said.

These judgments ruled that LIFG was not considered a threat by UK security services and was not proscribed by the UK as a terrorist organisation until October 2005.

By 2011, and following a request by the Foreign Office, he had been removed from both the UN and the EU lists, but he continued fighting to prove he should never have on them in the first place.

On January 14 he finally won his case after the General Court of the EU ruled that evidence supplied by the UK did not meet required legal standards.

It said the “twofold assumption” in the FCO letter that he was a member of LIFG in 2008 and that LIFG was linked to Al Qaeda “does not appear to be firmly established and well founded, in the light of not only the detailed rebuttals advanced by Mr Abdulrahim, but also the findings of fact independently made by the English courts”.

The Court added that more detailed Foreign Office claims about Abdulrahim’s supposed links to Al Qaeda were “not supported by any information or evidence on the basis of which it can be established that they are well founded in fact” and consequently did not meet “the requisite legal standard”.

Abdulrahim convinced the European court that he barely knew men whom the Foreign Office believed were his “close associates”, having last seen one of them in 2003 or 2004.

January’s ruling is the final stage in Abdulrahim’s battle to clear his name since he was removed from the UN sanctions list.

A letter sent by the Permanent Representative of the UK to the chairman of the UN Sanctions Committee at that time supported the de-listing and explained its reasons for doing so.

But the General Court noted the letter “fails to specify the reasons why his listing on that list had been regarded as justified in July 2008.”

After the de-listing Abdulrahim sought a ruling that there was insufficient evidence to justify his inclusion in the first place.

But the General Court decided his application was “devoid of purpose” because, being de-listed, he could not be said to have an interest in the proceedings continuing.

He took the case to the Higher Court of Justice, which decided in May 2013 that his interest consisted of “securing his rehabilitation and, thus, some form of reparation for the non-material harm suffered by him.”

The case was then referred back to the General Court which this time ruled in his favour.

Abdulrahim was not available for comment. The Bureau asked his lawyer, Henry Miller of Birnberg Peirce, whether he would now be pursuing a damages claim against the EU. Miller declined to comment on that question.

However, in making a wider point, he said it remained to be seen whether the rule change would lead to member states disclosing more evidence to judges.

“UN sanctions decisions are made following secret nominations by national governments. It is not clear what evidence is available to the UN Committee when designating individuals, and therefore what could be disclosed to the EU courts following the change in the law,” he said.

The rule change to allow secret evidence must now be approved by the General Court.