February 2, 2015 by Jack Serle
Published in: Uncategorized
Tweet
Email this 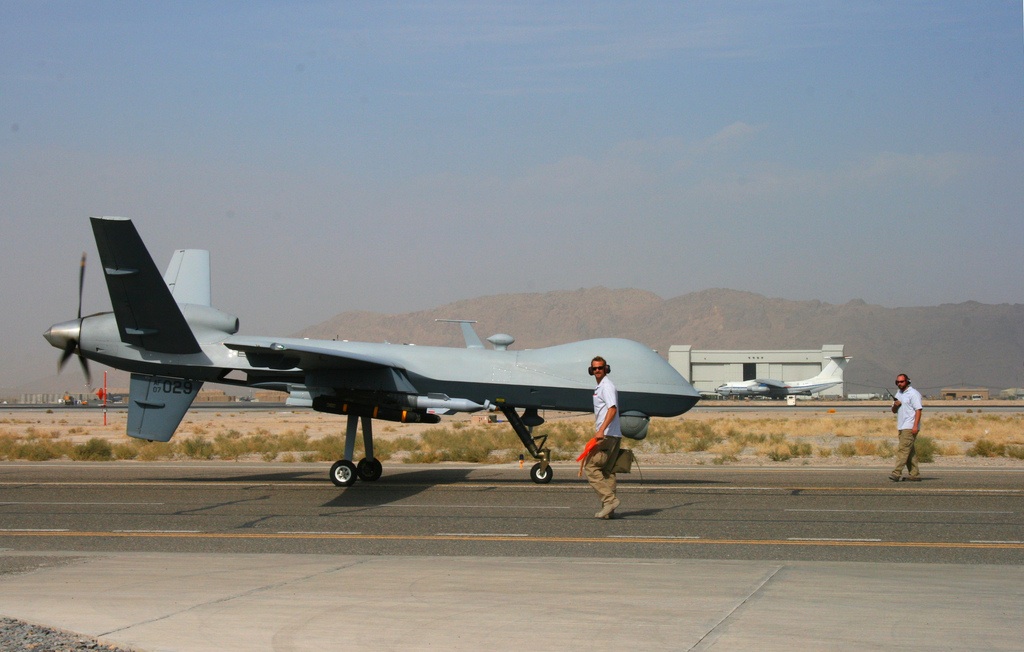 US increases its strikes in Pakistan with drones flying out of Afghanistan (David Axe/Flickr).

At least 2,464 people have now been killed by US drone strikes outside the country’s declared war zones since President Barack Obama’s inauguration six years ago, the Bureau’s latest monthly report reveals.

Of the total killed since Obama took his oath of office on January 20 2009, at least 314 have been civilians, while the number of confirmed strikes under his administration now stands at 456.

Research by the Bureau also shows there have now been nearly nine times more strikes under Obama in Pakistan, Yemen and Somalia than there were under his predecessor, George W Bush.

And the covert Obama strikes, the first of which hit Pakistan just three days after his inauguration, have killed almost six times more people and twice as many civilians than those ordered in the Bush years, the data shows.

The figures have been compiled as part of the Bureau’s monthly report into covert US drone attacks, which are run in two separate missions – one by the CIA and one for the Pentagon by its secretive special forces outfit, Joint Special Operations Command (JSOC).

The research centres on countries outside the US’s declared war zones of Iraq and Afghanistan.

The first strike of the Bush administration, outside Afghanistan, was on November 3 2002, in Yemen. However there was not a reported drone strike outside Iraq or Afghanistan for 18 months, until the CIA killed 6-8 in Pakistan on June 17 2004. That was more than three years into President Bush’s first term.

In total, there were 52 strikes under Bush, killing 416 people, of whom 167 were civilians.

According to the Bureau’s latest report, January 2015 saw an intensification of the US campaign in both Pakistan and Yemen.

The US has stepped up its drone campaign in Pakistan in January, launching more strikes and killing more people in a month than any since July 2014. 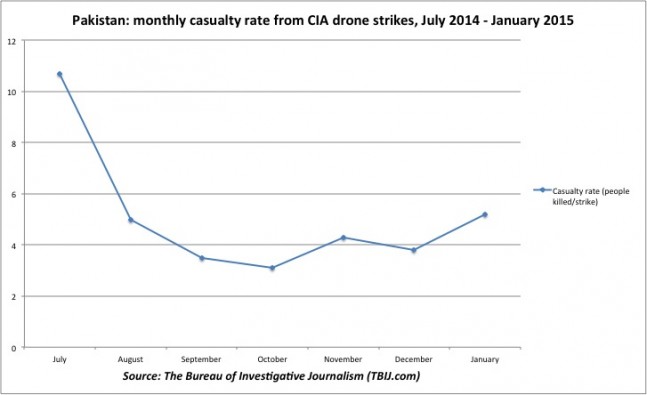 Four of the five strikes reportedly targeted the Shawal area – a thickly wooded region with steep valleys that crosses the borders of North and South Waziristan, and of Pakistan and Afghanistan. It is reportedly a major stronghold for armed groups in Pakistan’s tribal areas.

The Pakistan military has continued its air and ground operation in North Waziristan. The ongoing offensive has reportedly pushed Arab and Central Asian fighters out of Pakistan, into Afghanistan, according to the Wall Street Journal. US drone strikes have continued across the border, despite the Nato mission there having come to an end.

Every strike this month reportedly killed foreigners as well as local men. The nationality of these foreign fighters was not always clear, though they were often described as being Uzbeks. It is not clear if this is a reference to their nationality or ethnicity.

Some of the dead were described in media reports as being loyal to Hafiz Gul Bahadur, a well known warlord from the tribal areas. There were reports he was killed in the first strike of the year, but they later turned out to be false.

Also this month, the Bureau has completed an audit of its Pakistan drone data. It has now available to download as a spreadsheet.

Two reported US drone strikes left at least six people dead in the final week of January. An unnamed US official confirmed the first attack was carried out by the CIA. It reportedly killed a child. The second strike remains unconfirmed.

These attacks came as armed rebels took over the streets of the capital, toppling the government of former president Abd Rabbo Mansour Hadi. It is the worst political crisis in Yemen since the 2011 revolution that ultimately forced Hadi’s predecessor from power. The fall of Hadi’s government has robbed the US of a close ally. It has left the US “facing increasing difficulty acquiring intelligence” for its drone programme.

The first strike on January 26 hit four days after Hadi’s government resigned and the day after President Obama declared the US would continue its counter-terrorism operations in Yemen, despite the political situation. The CIA attack killed Mohammed Toaymen, a child reportedly aged between 12 and 15. He died alongside Awaid al Rashidi, a Saudi in his 30s, and Abdel Aziz al Zidani, a Yemeni.

Al Qaeda in the Arabian Peninsula (AQAP) said all three were members of the group, though an unnamed AQAP source made a distinction between a supporting member of the group and an operative with an active roll.

According to Naional Org for Victims of #Drones:12yr old Mohamed Tuaiman was killed in #Marib today by a drone #Yemen pic.twitter.com/rEVtJNw4eV

“Be logical,” an AQAP source told the Yemen Times. “How can a 12-year-old be a member of al Qaeda? Our aim was to convince him to join us in the future, especially considering that his father was killed in a drone strike.”

A US official confirmed to the New York Times that the CIA carried out the strike. It was the first reported US attack in the country for 51 days.

Related story: Analysis: What next for Yemen?

A second attack was reported on January 31. This unconfirmed US drone strike killed 3-4 people in a car in southern Shabwa province.

The attacks hit during one of the worst crises to affect the country, according Yemen expert Adam Baron at the European Council on Foreign Relations. He told McClatchy: “The phrase, ‘Yemen on the brink’ is one of the most pervasive clichés in coverage of the region. But Yemen is clearly more on the brink than it’s ever been in its history of being on the brink.”

The ongoing political crisis is “obviously a fantastic opportunity for al Qaeda”, Baron told the Bureau. The armed group took advantage of instability during the 2011 revolution that unseated then-president Ali Abdullah Saleh. It took control of a large swathe of the southern province of Abyan, setting itself up as the local government – providing people with power and meting out justice to petty criminals.

There were two possible US drone strikes in Somalia on January 31, with between 45 and 69 people reported killed.

It was not clear from the reporting when the strikes took place. Both attacks reportedly killed al Shabaab fighters, though their identities were unknown. Both attacks were reported to have been US attacks. The US Department of Defense, which runs the US drone programme in Somalia, declined to comment on the reported strikes. A spokesman for Amisom, the African Union peacekeeping force in Somalia, told the Bureau it was not responsible for the attack. And the Kenyan Defence Force (KDF), which has launched air strikes in Somalia, did not respond to Bureau requests for comment.

The first strike was reported to have killed at least 40 people when it reportedly hit an al Shabaab training camp in the Lower Shabelle region, south of the capital Mogadishu. The region’s governor told reporters the strike was carried out by drones. However the death toll was disproportionately higher than any other drone strike in Somalia. If US involvement is confirmed, it would be the most fatal drone strike recorded anywhere by the Bureau since Jun 2009 when CIA drones killed at least 60 in Pakistan.

The KDF reportedly targeted al Shabaab in southern Somalia with greater frequency last year than the US. This January 31 attack could have been a KDF strike – the Kenyan air force operations tended to have high reported death tolls, though these casualty counts were according to the KDF itself and not independently verified. For example, in November 2014 100 al Shabaab were reportedly killed by a Kenyan strike.

A second strike also reportedly hit on Saturday. It was said to have killed at least five people and reportedly hit either an al Shabaab convoy or an al Shabaab house in the Bay area, to the west of Mogadishu. A local resident told AFP the strike may have killed some civilians. Ali Yare said “four civilians were among the casualties” though did not specify if they were injured or dead.

Also this month, the Bureau has published its data on US strikes in Somalia as a spreadsheet to download.