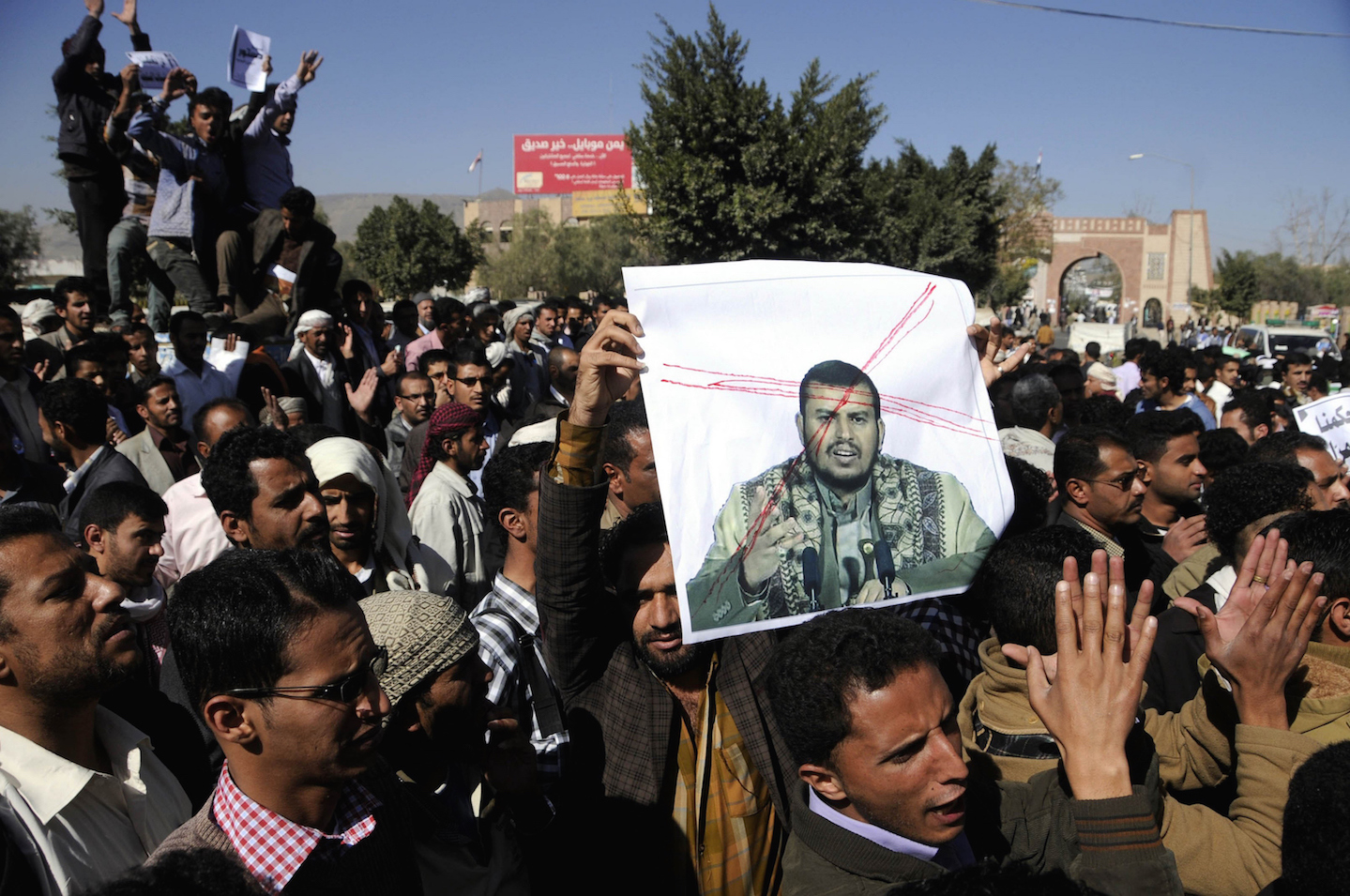 A confirmed US drone strike that hit Yemen in the midst of one of the country’s worst ever crises this week means at least 424 people, including eight children, have now been killed in such missions since the start of operations in 2002, Bureau research shows.

Monday’s attack south of Yemen’s capital Sanaa was ordered by the CIA and killed three people, one of whom was reported to be a child aged between 12 and 15.

His death is being seen as a reminder that civilians are continuing to be killed by US targeted strikes in Yemen, in contrast with covert operations in Pakistan where there have been no confirmed civilian deaths since 2012.

The strike was the first attack in Yemen by either the Pentagon or the CIA for 51 days and the first since Al Qaeda in the Arab Peninsula (AQAP) claimed responsibility for the terrorist massacres in Paris earlier this month.

It came as political turmoil gripped the Yemen government, with the president, the prime minister and his entire cabinet all quitting last week after Houthi rebels stormed the presidential palace.

There are now serious concerns about what might happen next in Yemen. Adam Baron, an expert at the European Council on Foreign Relations, told the Bureau today: “This is obviously a fantastic opportunity for al Qaeda.”

One of Monday’s drone strike victims was named as Mohammed Toayman, whose brother and father were killed in a previous US attack on October 14 2011.

US officials insist he and the two other men killed on Monday were al Qaeda operatives of fighting age.

However, Yemeni journalist Amal al Yarisi, who in November 2014 travelled to the boy’s home in Marib province to interview his extensive family, rejected this claim.

She told the Bureau this week that he had been “studying in the 6th grade” and “wasn’t involved with AQAP”.

His family also rejected reports he was a member of the group.

According to Naional Org for Victims of #Drones:12yr old Mohamed Tuaiman was killed in #Marib today by a drone #Yemen pic.twitter.com/rEVtJNw4eV

While the family home was reportedly covered in al Qaeda flags, Toayman’s siblings said there was difference between supporting al Qaeda and being an al Qaeda operative.

The death of his father, brother and now him is being seen as further concerning evidence that US drone strikes are radicalising the families of the people they kill.

Toayaman was reportedly killed with Awaid al Rashidi, a Saudi, and Abdel Aziz al Zidani, a Yemeni, when a CIA drone targeted a vehicle in southern-central Yemen.

Al Qaeda said all three were members of the group and it is understood that while al Rashidi and al Zidani were both low-level fighters, Toayman has been described as a supporter who might well have progressed into a combat role.

The CIA declined to comment on reports of Toayman’s death, or the strike in general.

The strike hit on January 26, four days after the Yemeni government collapsed as armed rebels occupied the capital.

“This is obviously a fantastic opportunity for al Qaeda. Al Qaeda guys are giddy on social media” – Adam Baron

It also came a day after President Barack Obama said the US would not stop counter-terrorism operations in the country, despite the chaos.

Yemen’s president, prime minister and cabinet quit on January 22 after Houthi rebels, who have been occupying the capital since September 2014, broke a ceasefire and stormed the presidential palace.

The Houthis are an armed wing of a political movement from the north of Yemen. They are nominally part of the Zaydi sect and are trying to reverse decades of what they see as repression, and political and religious marginalisation.

Commenting on the expanding power vacuum, the European Council on Foreign Relations’ Baron told the Bureau: “This is obviously a fantastic opportunity for al Qaeda. Al Qaeda guys are giddy on social media.”

Zaydism is an offshoot of Shia Islam and the Houthis’ role in the current situation gives AQAP “the opportunity to play the sectarian game,” he added.

The breakdown of Yemen’s government threatens to create a power vacuum that AQAP could easily exploit.

Al Qaeda has in the past used previous political upheavals to its advantage.

This perilous situation comes a little more than four months after President Obama lauded the success of his strategy in Yemen of coordinating with a strong local government while using drones for targeted killing.

He declared it would be the template for US operations in Iraq and Syria against Islamic State.

US targeted killing operations in Yemen: in numbers


Unlike in Pakistan, the US operations in Yemen have been carried out with the blessing of the country’s government.

Targeted strikes in Yemen are carried out not only with drones, but also with jet fighters and cruise missiles. They are run in two separate missions, one by the CIA and one for the Pentagon by its secretive special forces outfit – Joint Special Operations Command (JSOC).

Both JSOC and the CIA have separate target priorities, or kill lists, though these have reportedly been unified in a master database, or “disposition matrix,” according to the Washington Post.

Both drone campaigns are run in secret and it is usually impossible to tell which strikes are carried out by JSOC or the CIA, a civilian agency.

Occasionally unnamed US officials will say a particular strike was carried out by one or other agency. For example, the latest strike was reportedly a CIA mission, according to an official quoted by the New York Times. A highly controversial strike on a wedding party in December 2013 was a military strike, according to US officials.

The Bureau compiles data strikes that have been confirmed by US authorities and also those which remain unconfirmed. We keep running totals on the numbers of strikes and on casualties, which we split out between combatants, civilians and children.

The first US strike in Yemen was on November 3 2002 – also the first reported drone strike outside Afghanistan. However this was an isolated operation, the next confirmed drone strike was on May 5 2011.

In the period, there have been at least 103 confirmed US targeted killing operations, of which 88 have been with drones and 15 falling into other categories, including cruise missile strikes and special forces ground raids.

These confirmed strikes have now killed at least 580 people, of which 424 were hit by drones. Overall, at least 131 civilians have been reported killed by confirmed US attacks, of which at least 65 were by drones.

Following Monday’s strike, a total of 34 children have now been killed by confirmed targeted strikes. Of those, eight have been killed by drones and 26 by other platforms, including jet fighters and cruise missiles.

The Bureau is also aware of another 70 unconfirmed drone strikes, which have killed a possible additional 304 people including six children.

The strikes in Yemen tend to come in waves, rather than at a constant rate. While attacks peaked in 2012 with 37 confirmed attacks, the rate has not fallen far from there – there were at least 17 in 2014.

In Pakistan, drone strikes also fluctuate in frequency through a year. However they are more constant. There have been few months in Pakistan without a reported strike. There have been more than four times the strikes than in Yemen, and all of them have been carried out by the CIA.

The chaos currently engulfing Yemen has been building over the past 25 years – Sanaa and the Houthis have fought several bloody wars in that time. But the current crisis has strong roots in 2011 when popular protests began to foment into revolution and demands for an end to the 30-year rule of kleptocratic dictator Ali Abdullah Saleh.

The Houthis took advantage of the ensuing instability to take greater control of the northern governorate of Sadaa, their traditional heartland, according to Baron writing for al Jazeera this week.

Al Qaeda took advantage of the same period of instability to take over a swathe of southern Yemen. Saleh’s security forces tried to put down the protests in Sanaa, drawing the military’s focus away from al Qaeda, allowing the group to establish itself in towns in the governorate of Abyan.

The notoriously corrupt government in Sanaa was distracted by the revolution – and government institutions in rural areas, such as they were, began to falter. Al Qaeda stepped into the gap, providing basic services, improving security and returned power supplies to the population.

There are worrying similarities between the failure of government in 2011 with the current situation. The ongoing chaos is going to do considerable damage to the Yemeni economy, Baron told the Bureau. There are indications the government “won’t pay salaries for February”, he added.

Al Qaeda is in a position to pay salaries, and therefore buy influence. “If you have to feed your family you’ll side with the devil if you have to,” Baron told the Bureau.

Furthermore it has given al Qaeda the chance to inflame sectarian tensions. They have positioned themselves as the defenders of Sunni Yemenis against the Houthis whose Zaydism is an offshoot of the Shia sect.

The US held off on drone strikes during the first months of 2011 as the revolution destablised the country. But as al Qaeda became more entrenched, the drones returned to Yemen’s skies. The US carried out nine confirmed strikes between May and October, killing 39 people.

The strikes halted in late 2011 and into 2012 when the revolution against Saleh came to a head. In February 2012 the president agreed to relinquish his rule to his deputy, the freshly deposed Abd Rabbuh Mansur Hadi.

The new administration quickly began a protracted military campaign against AQAP’s southern enclave. And the US provided considerable air support. Scores of drone and air strikes killed hundreds of people.

It remains to be seen if the US will intervene in Yemen as it did in 2011 and 2012. Baron believes “the US would be much better off sitting and waiting and watching what happens”.

Working with a journalist who visited the targeted village of al Yakla five days after the raid and talked to nine of the survivors, we have collected the names and ages of all 25 civilians killed as reported by those who live there. Nine children under the age of 13 were among the victims.

US jets kill at least 40 AQAP fighters in eastern Yemen.

Shabwa, Yemen – Flickr/dianadrz Distinguishing between militants in Yemen and those merely associated with them is getting harder as the country’s war drags on, correspondent Iona Craig told this week’s Drone News. In conversation with the Open Society Justice Initiative’s Amrit Singh, … Continued