September 19, 2014 by Bureau Reporter
Published in: Uncategorized
Tweet
Email this 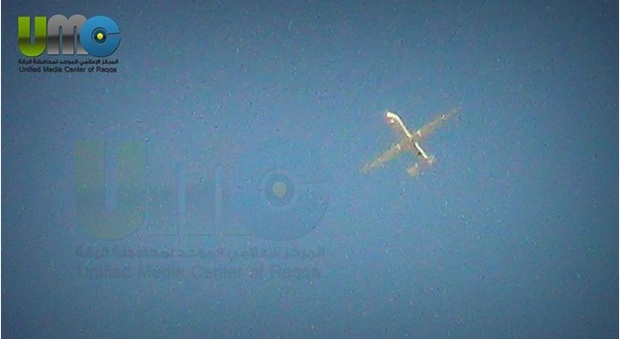 In today’s podcast, citizen journalism pioneer Eliot Higgins, who blogs under the name Brown Moses, tells Owen Bennett-Jones what’s been going on over the skies of Iraq and Syria.

Higgins has become famous for tracking the use of military equipment in conflict zones by analysing Youtube footage and engaging people on social media to confirm and progress his findings.

Listen to the podcast

There have been reports of unarmed US Predators being launched from a commercial airport in Iraq, Higgins told Drone News, and people also claim to have spotted Iranian surveillance drones flying over the country.

In Syria meanwhile, the Iranian drones that have reportedly been seen there for some time seem to have been joined by a US one. A post on Higgins’s website Bellingcat suggested an aircraft apparently carrying out a surveillance mission over the ISIS stronghold of Raqqa was a Predator drone.

Unlike in Iraq, the US government does not have permission from the Syrian government to fly its drones over their territory, and there has been speculation that Syrian air defences would be a problem for the US campaign against Isis there.

However Isis – which is also known as Islamic State – recently captured a Syrian government airbase near Raqqa containing radar equipment, according to Higgins.

“One of the ironies of this is: as the Islamic State is more successful in capturing air bases and radar bases, it’s actually making it easier for the US to operate inside Syria with drones”, he said.

The Bureau’s Jack Serle got the US Department of Defense (DOD) to confirm that they had been basing “intelligence, surveillance and reconnaissance systems” out of an airfield in Erbil in Northern Iraq.

As Serle explains on today’s podcast however, although the US air campaign against ISIS has been much more publicised than their strikes against militants in Yemen, Pakistan and Afghanistan, it is sometimes easier to get details of operations in these other theatres. He was told the DOD could not confirm the type of aircraft or systems used in Iraq and Syria because of  “host nation sensitivities and operational security”, nor would they confirm how many people had been killed.

Whilst the role of military drones in the campaign against Isis has yet to become clear, manufacturers are eager to roll products out in to civil aviation space, as the Bureau’s new reporter Abigail Fielding-Smith discovered when she went to an unmanned aerial systems conference in Twickenham earlier this month.

The problem is that the regulation isn’t in place to allow this to happen on a wide scale. Unpicking the privacy and safety issues is going to be complicated, Fielding-Smith told Drone News, and with the industry keen for speedy legislation, “it’s going to be interesting watching how that will unfold”.