July 16, 2014 by Jack Serle
Published in: Uncategorized
Tweet
Email this 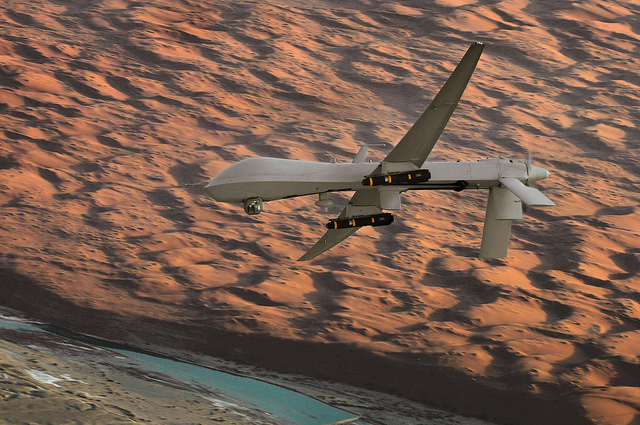 US drones have killed at least 13 people in the bloodiest strike in Pakistan for over a year.

The attack reportedly destroyed a house and car in the Datta Khel area early on Wednesday morning. The dead were unidentified though one source said up to 12 were Uzbeks.

A senior intelligence source told the Washington Post: “The compound was being used by foreign militants, and some local terrorists were present in the vehicle that got targeted.”

This was the second strike in six days to hit near the village and surrounding area. The first, on July 10, killed six or seven people.

The latest strike bucks a trend of drone strikes killing low numbers of people. A Bureau analysis this month found that on average four people have been killed per strike.

Datta Khel is close to the front line of a Pakistani military operation aimed at clearing militants from North Waziristan, an offensive which has been ongoing for more than a month.

According to data collected by the Bureau, the area has been targeted many times in the past by US drones. At least 35 drone strikes have hit the Datta Khel area since 2004, killing a minimum of 109 people – at least 50 of them reportedly civilians.

It is part of a wider area in North Waziristan where US drone strikes have been concentrated and where armed groups including the Pakistan Taliban have taken hold.

It was in the area around Miranshah that drones targeted a house and vehicle a year ago, in another particularly bloody strike. On this occasion between 16 and 18 people were killed. They were reportedly Afghans, Pakistanis and an Algerian. The Bureau has recorded 13 of their names in the Naming the Dead database.

CIA drones have hit targets in and around the town at least 17 times since 2004.

Once home to 100,000 people, the city is now deserted according to journalists who have been in embeds with the Pakistan military.

A few hours after the US drone attack on Datta Khel, a Pakistani air raid killed around 35 people in the Shawal valley a remote area near the border of North and South Waziristan, and Afghanistan. The Pakistan army said the dead were Taliban fighters who had retreated from the fighting in North Waziristan.

A horrific suicide bombing hit a market in the area on July 15 killing at least 42 people. Initial reports put the death toll at 89.

The Pakistan military claims it has killed over 400 militants during its assault in North Waziristan which started on June 15. Pakistani air strikes had been targeting the area throughout 2014.

A Bureau investigation found the Pakistan Air Force killed 291 to 540 people in 15 air strikes over the six months leading up to the start of ground operations. At least 16 and possibly as many as 112 were reportedly civilians.