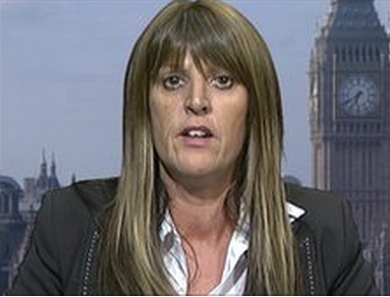 Fraser appeared on the BBC to talk about knife crime. (Screen grab)

Lorraine Fraser’s son Tyrone Clarke was murdered in 2004. Sixteen-year-old Clarke was set upon by a group of around 20 men near his home in Beeston, Leeds. The group wielded metal bars, baseball bats and knives. Clarke died from stab wounds.

Four men were convicted of the murder. Their convictions were then appealed in the Court of Appeal before being ruled on in the House of Lords, in R v Rahman. There the Lords ruled that even though the appellant in question, Islamur Rahman, had not inflicted the fatal injury, the outcome of the attack was not ’fundamentally different’ to what he could have expected to happen.

The conviction of Clarke’s killers has become important in case law, which informs use of joint enterprise.

Since her son’s tragic death Fraser has been a vocal supporter of the joint enterprise doctrine.

Related story: Joint Enterprise – ‘Most people don’t realise they had put themselves in jeopardy’

‘We need this law,’ she explains. ‘Without this law people could get away with murder. Police officers tell me they do convict using it, and that this law is a good deterrent on the streets.’

She also believes the doctrine leads to just convictions. ’If it were your loved one that had been knifed and the others had gone in a group, encouraged it and did nothing to stop it, wouldn’t you say they were all involved, that they all played a part?’

Without this law people could get away with murder.
Lorraine Fraser

She noted that in prosecution proceedings groups of suspects might protect each other, ‘often those that were there at the killing will refuse to testify about who was responsible,’ Fraser noted. ‘But if no-one admits who did the stabbing then they can all go down. The alternative is no-one is convicted, and that’s wrong.’

Fraser also disputes the notion that joint enterprise is a lazy law. ‘The joint enterprise doctrine is a very, very complicated law,’ she says, ‘judges don’t just convict willy nilly, there has to be evidence that puts the suspect there at the scene. These judges know what they are doing, they do not rush anything, they delve into it.’

She goes on to say that where there are concerns the conviction can be appealed at higher courts. Her son’s killers took their case to the Supreme Court, where Lords upheld the conviction. ’Or are we saying that these Law Lords don’t know what they are on about?’ she questions.

It is a very complicated law but a necessary law to have in our country.
Lorraine Fraser

‘I wouldn’t want to see anyone convicted of a joint enterprise murder if they weren’t placed at the scene,’ she adds, ‘but if they were there and a person died, well at the end of the day we all know right from wrong.’

‘It is a very complicated law but a necessary law to have in our country,’ she adds.