March 10, 2014 by Melanie Newman
Published in: Uncategorized
Tweet
Email this 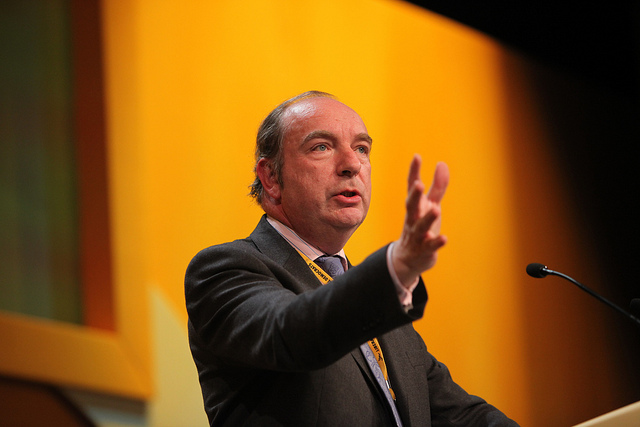 Norman Baker, crime prevention minister, wants to ‘ensure investigations are undertaken with an absolute focus on the needs of the victims’.  (Image: Liberal Democrats’ Flickr)

The Home Office has told police to record rapes as crimes as soon as the victim makes an allegation.

This new guidance follows the revelation by the Bureau of Investigative Journalism that police forces across the country differed in their policy on recording rape.

While some forces take a victim’s allegation at face value, others delay recording the rape as a crime until after preliminary inquiries have been carried out. Many allegations drop out during these early inquiries and are never properly investigated.

Crime prevention minister Norman Baker told the Bureau: ‘Rape is an abhorrent crime and I want to ensure that investigations are undertaken with an absolute focus on the needs of the victim.

‘Policing Minister Damian Green and I have jointly written to all Chief Constables and Police and Crime Commissioners setting out our view that every allegation of rape should be recorded as a crime at the point it is reported.’

This new guidance was sent out last month, the Home Office said.

Delays in crime recording leave time for the police, suspect or family to put pressure on the victim to withdraw the allegation, or for the victim to simply change their mind.

If an allegation is withdrawn before a crime is officially recorded, it is treated as if it never happened.

The new guidance should mean more rape allegations are recorded and investigated.

It should also be possible to compare, for the first time, the number of rape reports made to police in different regions.

The 72-hour rule and delays in sex crime recording

Home Office rules state that an incident should be recorded as a crime as soon as officers are satisfied that it is more likely than not that one has been committed, and within a maximum of 72 hours from the time the incident is first logged.

In January the Bureau revealed how a number of Police and Crime Commissioners and senior police officers were calling for the 72-hour limit to be scrapped for rape, which they said should instead be recorded as a crime as soon as the allegation was made.

‘One thing that does need sorting is the “72 hour rule” that most Forces adopt to serious sexual offence allegations,’ Dorset PCC Martyn Underhill said in a statement to the public administration select committee.

‘Research shows that what is reported at 3am on a Saturday night as a rape is often downgraded in the cold light of day, hence forces adopting the 72 hour rule.

‘I think this should be stopped, but it will lead to a massive increase in rape allegations that, when scrutinised later, are actually indecent assaults.’

One thing that does need sorting is the “72 hour rule” that most Forces adopt to serious sexual offence allegations.
Martyn Underhill, Dorset Police and Crime Commissioner

There is no way of estimating how many rape complaints are never included in official crime statistics as a result of delays in recording.

A 2013 internal Metropolitan Police report by PC James Patrick includes part of an email chain in which a senior officer admits that prior to 2009, London boroughs had a policy of delaying crime recording.

‘Many boroughs had policies in place to not let anyone open a rape CRIS [crime report] until the victim had been seen by a detective sergeant from their [specialist sex offences] team.

‘A good proportion of victims who attended to a report just got fed up waiting and walked away with no CRIS record ever being made,’ the officer says.

Transferring responsibility for rape investigations away from boroughs to a centralised team had dealt with this problem and had lead to a huge increase in volumes of allegations being recorded, the officer added.

PC Patrick, who is currently facing misconduct allegations over a whistleblowing book, has since given evidence to the Public Administration Select Committee on manipulation of sex crime statistics.

At least seven forces do not record rapes as crimes immediately

The Bureau’s research, published in January, found at least seven police forces  with a policy of investigating rape allegations before recording them as crimes. These forces were able to do this by working within the 72 hour framework, which allows forces up to 72 hours to record a crime.

Bedfordshire Police told the Bureau that it did not even record rapes as a crime after the first meeting between police and victim.

‘The incident is not crimed [recorded as an offence] on first attendance, with the priority being victim care and initial forensic and immediate investigative progression,’ a force spokeswoman said. Instead, crime is recorded after a revisit by specialist investigators.

South Yorkshire Police also said it does not ‘crime’ incidents straightaway.  ‘Rather the incident (of any nature, not just sexual offences) is allocated and investigated and there are up to 72 hours in which to do this before criming,’ it said.

Five other forces also said they investigate rapes before recording them.

Lack of data on rape allegations

The new Home Office guidance stating that all rape allegations should be recorded as crimes will mean much more data becomes available to researchers tracking rape case ‘attrition’ – the rate at which cases drop out of the criminal justice system.

Most police forces currently do not collect data on rape allegations.

They do record numbers of reported rapes initially deemed by them to constitute crimes.

If a rape has been recorded as a crime and additional evidence subsequently comes to light that shows it did not occur, the report will be classed as a ‘no-crime’.

Data on rape reports classed as ‘no-crimes’ is also collected by forces and monitored centrally.

However an incident has to be recorded as a crime before it can be re-classified as a no-crime.

For most forces, the extent to which rape reports are dismissed at an earlier stage, before they are even recorded as a crime is unknown as they do not collect this data.

This was identified as an issue in 2007, when Home Office researchers wanted to track progress of initial rape allegations through to recorded crimes and found they could not because of a lack of data.

Home Office researchers on lack of data on rape allegations

Originally it had been intended to look at the progress of initial allegations of rape through to recorded crimes.

‘Unfortunately, in practice, most forces were not able to link incidents to crimes within a specific crime type level; most had incident ‘codes’ that were broader than the offence of ‘rape’.’

By no means all rapes reported to the police are reported as incidents (since a high proportion are reported some time after the offence). Nor do all incidents that end up as crimed rapes start out as sexual offence incidents. By the same token, not all crimes that are reported as rape incidents – should a force have this level of detail of incident recording – end up being crimed as rapes.’

Marianne Hester, professor of gender and violence at the University of Bristol, said: ‘We need to know what is happening from the point at which a rape is reported to the police – not just the point at which the rape is recorded – and then at every stage as the case moves through the system.

Data published by HMIC showed a wide variation in the percentage of rape reports which forces classed as ‘no-crimes’ in 2012/13. This provoked a national outcry and suggestions of a ‘culture of disbelief’.

But an allegation can only be classed as a ‘no-crime’ after it has been recorded as a crime.

There is currently no way of knowing whether there is similar variation in the percentage of rape allegations dropped before they are recorded as crimes.

This is because forces do not record rape allegations consistently.

What limited data there is available shows that far more allegations are dropped before they are recorded as crimes than are initially classed as crimes and then dropped as ‘no-crimes’.

Some forces were able to supply ‘rape incident figures’ to the Bureau following Freedom of Information requests.

In these forces some – but not all – rape allegations are recorded as ‘incidents’ before being re-classified as crimes.

Data obtained from Essex Police shows it dropped 217 rapes that had been recorded as ‘incidents’ but were not then recorded as crimes.

In contrast the force dropped 44 cases as ‘no-crimes’ – these reports had initially been accepted as crimes but were then reclassified as ‘no-crimes’.

The 44 ‘no-crimes’ appeared on national Home Office databases and were subjected to external and internal scrutiny that did not apply to the 217 ‘rape incidents’ that were never recorded as crimes.

There is no suggestion that Essex Police is incorrectly dropping rapes before it records them as crimes.

‘There are a number of scenarios that regularly occur where a matter is reported to police and following investigation may not lead to a crime report being recorded in Essex,’ the force explained.

‘This might include cases where the victim declined to confirm that a crime has actually occurred, or a matter is reported and once investigated is clear that it occurred outside of our jurisdiction. In such cases, the matter would be passed onto the relevant force to crime under their command and control reference (not usually a crime number).

‘There are also cases where more than one caller reports the same event. These incidents are known as “duplicates”.  Only one incident will result in a crime report, the rest are closed.’

South Yorkshire Police dropped at least 258 rape reports that were recorded as incidents but not recorded as as crimes in 2012/13. In contrast just 15 rape cases were initially classified as crimes and then reclassed as no-crimes.

However the Police and Crime Commissioner for Kent invited HMIC to inspect the force in more depth in February 2013. This time, HMIC found ‘a significant number of cases (approximately 10%) where, based on the information in the incident record, crimes should have been recorded, but were not.’

‘In Kent, crimes are only recorded by the force after an officer has attended and spoken with the victim, and made a report to the IMU (Incident Management Unit).

On some occasions… this policy results in crimes not being recorded within the 72-hour limit … we found 15 crimes [out of 303 investigated] where this had happened.’

HMIC has said it will apply the more rigorous approach used in the second Kent investigation when it inspects all forces’ crime recording data in 2014.

All the Bureau’s work on Investigating Rape can be found here.