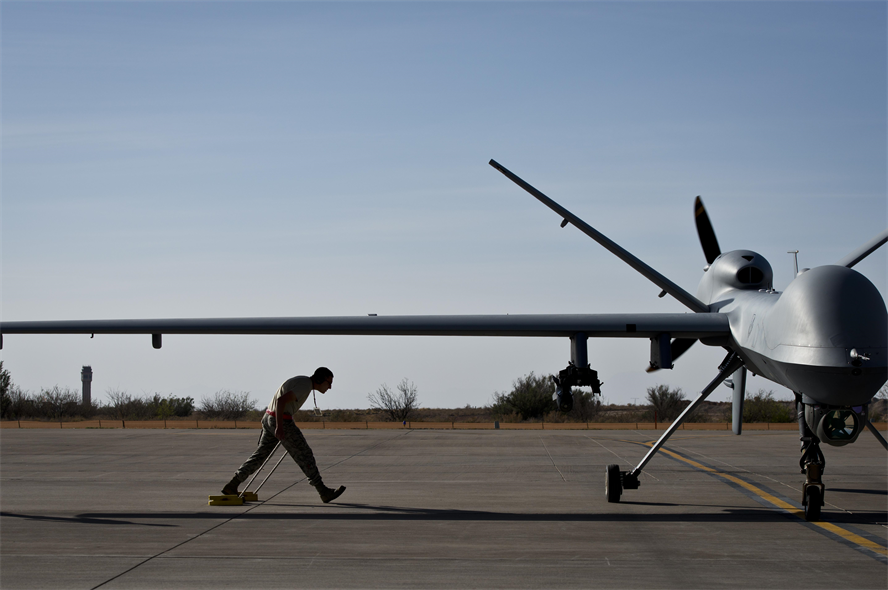 US drones launched no attacks in Pakistan for the second month in a row
(Photo: US Air Force photo/Senior Airman Andrew Lee).

No US operations are reported in Somalia.

There has been no report of a drone strike in Pakistan since Christmas Day, making this the longest pause in drone strikes in the country since 2007.

Unnamed US officials said the attacks have been stopped during peace talks between the Pakistan government and the Pakistan Taliban (TTP). Rahimullah Yusufzai, the Pakistani journalist who is part of the negotiating team, confirmed to the Bureau that Islamabad had requested the pause: ‘Pakistani officials have discussed this with the US ambassador [to Pakistan] and said that serious talks would be derailed by a drone strike,’ he said.

On February 17 peace talks collapsed following unremitting violence by the TTP. The militants killed scores of people, including 23 members of the Frontier Corps, before the negotiations eventually halted.

The Pakistan military has carried out several air attacks on North Waziristan, targeting militant positions. There have been reports of heavy civilian casualties as well as claims that leading Taliban commanders have been killed. As many as 50,000 people have been displaced from North Waziristan by the threat of a Pakistan Army offensive.

Unnamed officials told reporters that the Obama administration is considering whether to authorise the killing of a US citizen, who is reportedly in hiding in Pakistan. This would be the second time the administration has taken such steps – the previous occasion was before the death of New Mexico-born preacher Anwar al Awlaki, who was eventually killed by a drone in Yemen in September 2011. The New York Times identified the potential target as a bombmaker who operates under the nom de guerre Abdullah al Shami.

A blockade of Nato supplies crossing into Afghanistan from Khyber Pakhtunkhwa province in protest at drone strikes ended on February 27 after 98 days. The blockade was organised by PTI, the opposition party led by Imran Khan.

Local media reported that CIA director John Brennan secretly met Chief of the Army Staff General Raheel Sharif on February 21. It also emerged that General Lloyd Austin, chair of the US Joint Chiefs of Staff, also met General Sharif days beforehand, and the men had discussed sealing the Afghan border in the event of a full-scale Pakistani offensive against militants in North Waziristan.

Kareem Khan, an anti-drones activist whose brother and son were killed in a drone strike, was removed from his home by uniformed and plain-clothes men days before he was due to travel to Europe. He was held for nine days and alleges he was tortured. After his release, he went ahead with his trip to Europe, addressing politicians in Berlin, the Hague and London alongside tribal journalist Noor Behram. He also gave an interview to the Bureau’s podcast.

Members of the European Parliament overwhelmingly voted in favour of a motion calling on EU states not to ‘perpetrate unlawful targeted killings or facilitate such killings by other states’. And legal charity Reprieve filed a complaint with the International Criminal Court accusing US allies of being complicit in war crimes.

UN special rapporteur Ben Emmerson published the second report of his year-long investigation into drone strikes. This included details of 30 drone strikes that ‘cross the threshold’ of requiring a ‘public explanation’ on the part of the state that carried them out. Eight of the strikes were in Pakistan, while a further six were in Yemen and one was in Somalia.

There was one reported possible US drone strike in Yemen this month, though it is not clear if this was carried out by a different weapon, and whether the US or another party carried out the attack.

There are few confirmed details of the attack. But local and international media reported that an airstrike killed 0-4 people on February 3. The victims were not identified in media reports. Most sources alleged they were al Qaeda members, but one source said they could have been civilians.

More details emerged on the bloody strike on a wedding convoy on December 12 last year. Human Rights Watch (HRW) investigated the attack, reporting that it appears to violate several of the policy guidelines for targeted killing introduced by President Obama in May 2013. The investigation highlighted claims by multiple sources that some or all of the dead were civilians, but US officials told Associated Press an internal investigation had found that all the dead were allegedly members of al Qaeda in the Arabian Peninsula (AQAP).

In the process of investigating the strike, HRW spoke to President Abdel Rabbo Mansur al Hadi. The Yemeni leader said the UK, US, Yemen and Nato all participate in a secret ‘joint operations control room’ in Yemen’s capital, from which individuals who are ‘going to be targeted’ are identified. A Nato official denied it was involved in any such operations room. The UK declined to comment.

AQAP threatened more violence against the Yemeni security forces, and reportedly killed a cleric who spoke out against AQAP. There were claims a new shoe bomb threat to the US was being planned in Yemen.

It became clear that a tentative ceasefire signed between warring factions in the north of Yemen could collapse. And at the end of the month reports surfaced that Yemeni soldiers and Houthi separatists clashed, reportedly for the first time since 2010. It is not clear what this means for the planned political transition to a federal republic, made up of six states with more political and economic freedom from central government in Sanaa.

Al Shabaab, the local militant group that has declared loyalty to al Qaeda, carried out an assault on the presidential compound, Villa Somalia, in the heavily fortified diplomatic and government quarter of Mogadishu. A spokesman for the militants said: ‘We sent well-trained mujahedin from our special forces to bring us the president dead or alive.’ The attack killed 12, nine of whom were alleged militants, according to the New York Times.

In February the Bureau completed an audit of its database of covert US operations in Somalia. Owing to the huge difficulties of reporting from the country, some of the incidents relied on single sources. We have now classed these as unconfirmed strikes, in line with the Bureau’s methodology. This has led to a fall in the number of strikes and casualties recorded in the tally. The unconfirmed strikes are still presented in the timeline, with the suffix ‘c’ added to the strike’s code.

The Bureau published a detailed case study of Jude Kenan Mohammad, who the US identified last year as one of four US citizens to have been killed in drone strikes under President Obama. And Kareem Khan shared with the Bureau previously unreported details about Khaliq Dad, a stonemason, and his brother Asif Iqbal, who both died in a strike on December 31 2009.