February 3, 2014 by Jack Serle
Published in: Uncategorized
Tweet
Email this 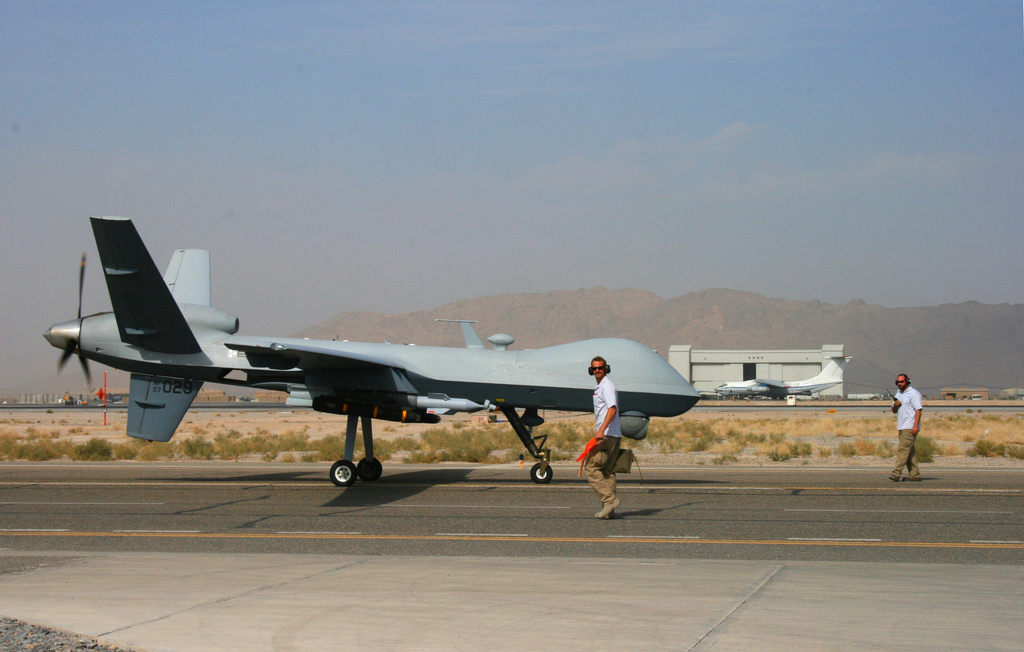 Previous pauses in the drone campaign have come at moments of political tension (Photo: David Axe/Flickr)

There were no reported drone strikes in Pakistan in January. This is the first calendar month without a drone strike in more than two years.

The last drone attack was reported in the country on December 25 2013 – 40 days ago. At least three people were killed in this strike, the only Christmas Day strike reported in Pakistan in 10 years of drone attacks.

It is not clear why there has been such a pause. Last year, although the number of strikes dropped considerably, Bureau data shows that there was on average a strike every two weeks.

The longest gap between strikes in 2013 lasted for 42 days between April 17 and May 29 2013. This pause ended with the death of Wali Ur Rehman, the deputy leader of the TTP. The gap in strikes coincided with Pakistan’s general election, in which drones were a major campaigning point, and also with the run-up to President Obama’s speech at the National Defense University, in which he announced new policy guidelines around covert lethal actions.

Breaks in the campaign in the past have usually reflected a deterioration in diplomatic relations between the US and Pakistan.

The last time Pakistan saw a calendar month without a drone strike was in December 2011, at a moment when relations between the two countries had become particularly fraught.

The year began with a CIA contractor, Raymond Davis, killing two Pakistani men in broad daylight on the streets of Lahore and then in May 2011, US Special Forces killed Osama Bin Laden without alerting the Pakistan government to the plan. Relations hit a new low in November when the US killed 24 Pakistani border guards in a botched air strike.

There was a 54-day break in strikes at the end of the year, which, according to Reuters, only resumed after calls to senior Pakistani officials on the subject of strikes from Vice President Joe Biden and Secretary of State Hillary Clinton.

After a reported drone strike killed 67-year-old grandmother Bibi Mamana and injured several of her grandchildren on October 24 2012, there was a 36-day pause in strikes. The death caused outrage in Pakistan and among campaigners.

Reza Jan of US policy think-tank the American Enterprise Institute (AEI), suggested that the current pause could indicate that the CIA is being more ‘judicious’ with its strikes. Jan, who leads the Pakistan team for Critical Threats, a security analysis project at AEI, said that in previous years the US would target any militant ‘regardless of their rank in the organisation’, but recently Washington seemed to be ‘restricting their target types to more senior fellows’.

However, Jan also said it is possible ‘requests have come across from the Pakistanis to the Americans to hold off on strikes’. He said the blow delivered to the peace process by the death of the leader of the Pakistan Taliban (TTP), Hakimullah Mehsud, in a drone strike last year may have spurred Pakistan to request the US to hold back for the time being. Pakistani prime minister Nawaz Sharif recently dispatched a negotiation team to try once again to start peace talks with the TTP.