January 30, 2014 by Maeve McClenaghan
Published in: Uncategorized
Tweet
Email this 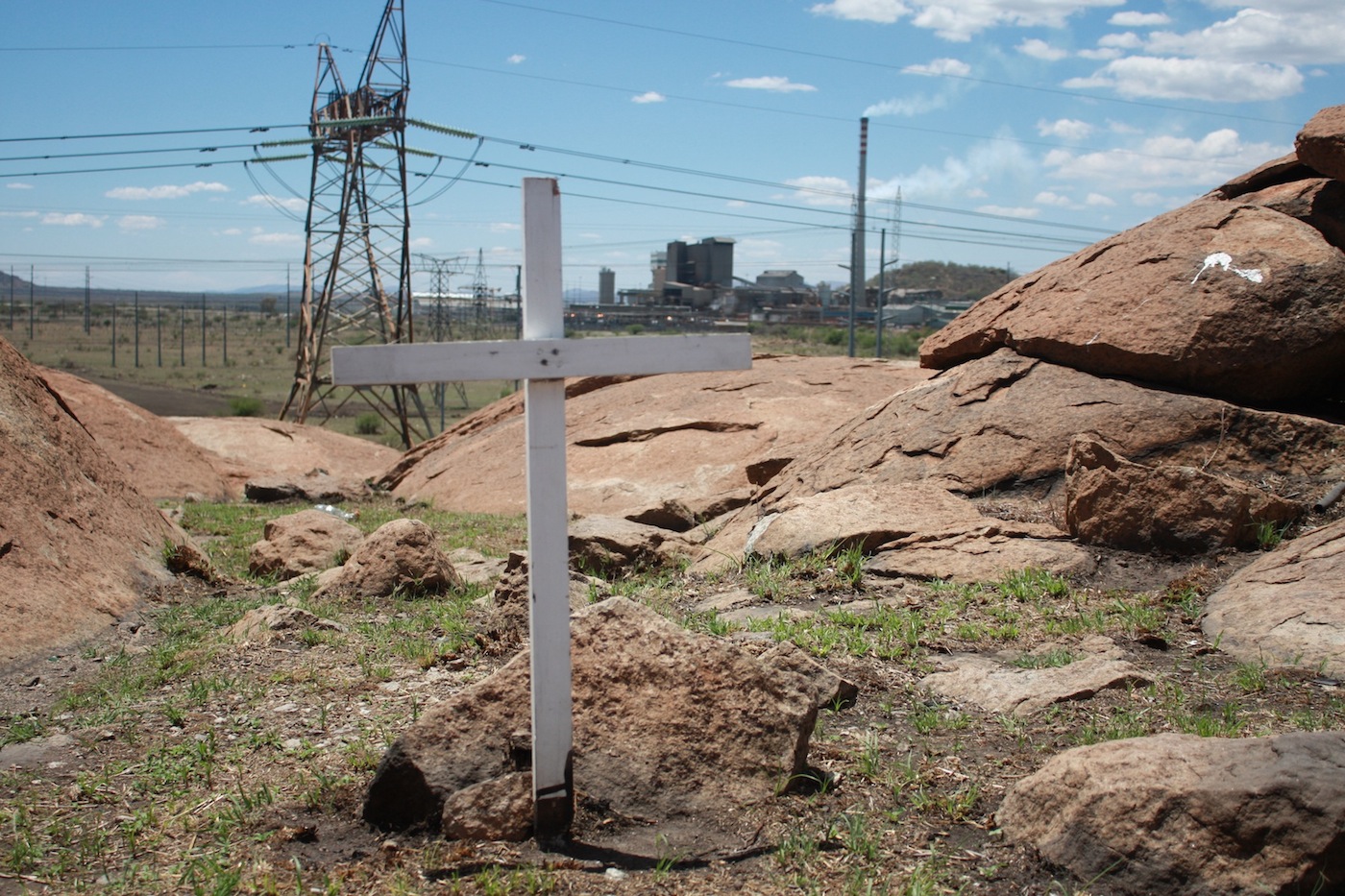 Shareholders of British platinum mining company Lonmin used the company’s Annual General Meeting today to ask questions about inquiries into the Marikana massacre of August 2012, when 34 striking miners were killed at the company’s South African mine.

The FTSE 250 company held its AGM in London and presented figures from its annual accounts showing an increase in profit. It also noted that it had exceeded production targets and moved from a debt of $421m at September 2012 to net cash of $201m.

Last year the Bureau explored the company’s actions leading up to the massacre, and found Lonmin staff working closely with the police to quell the strike. The police later moved in and shot 34 people dead, injuring 78 more.

Lonmin is currently engaged in another wage dispute with employees. Workers have been on strike since 23 January, calling for more money.

Questions on the inquiry
A commission of inquiry was set up to investigate the Marikana massacre. Headed by retired judge Ian Farlam the commission was originally planned to complete its work in a few months but has yet to conclude, over a year since it began.

So far evidence has been gathered from the miners and the police. Lonmin has yet to be called to explain its role in the events.

Peter Brayshaw, a councillor for the Borough of Camden and representative of LAPFF, which holds shares in the company, noted that the Farlam Inquiry ‘seems to be meandering somewhat.’

He noted that for Lonmin there are ‘clearly reputational issues that still loom.’ Camden council  pension fund hold shares in the company, along with several other local authority pension funds including that of Islington council.

Lonmin chairman Roger Phillimore agreed, ‘[The commission] is taking a long time and we’d very much like to be able to get the air cleared. We are suffering damage,’ he added.

However, the company refused to expand on questions over the massacre itself, saying, ‘Whatever we have to say we’ll say it to Farlam.’

John Gray, a trustee of UNISON, whose staff pension fund holds shares in the mine, asked for commitment from the company that any recommendations or findings from the Farlam commission would be acted upon.

Phillimore responded that he ‘was not in a position to write a blank cheque,’ but said ‘we will take a very serious note of the findings and will do whatever we need to do to respond.’

The strike and resulting violent put-down by the police took place in August 2012. The protests centred on a wage dispute, with Lonmin’s rock drill operators demanding an increase to their pay packets.

A six month investigation by the Bureau uncovered evidence of interaction between the police and company managers. We found that:

Lawyers for the families of those killed plan to challenge the company on these points when the company comes before the commission later this year.

At the AGM Chief Executive Officer Ben Magara explained several of the company’s community support initiatives including the Sixteen-Eight Memorial Fund, a fund set up to pay for the education of the children of those killed in the massacre.

According to Magara the fund has distributed  590,000 Rand already (approx. £39,000), and is committed to paying for education up to university level for the children of employees killed during the strike.

However, last year the Bureau revealed that contract labourers killed in the strike were not considered employees and therefore were not receiving benefits.

Related story: Voices from the front line: Victims of the Marikana massacre speak out

One individual shareholder at the AGM noted that he had sent a cheque to the fund, trying to donate, but that cheque had never been cashed. The chairman promised to provide him with another address.

Magara also explained that the company was failing on its commitment to provide housing for it workers. In the weeks following the massacre, Lonmin identified housing issues as a possible cause for upset amongst its workers, and announced it would act to improve the situation.

According to the company’s figures there is a shortage of adequate housing for 16,000 of its workers.

The current strike
Now, over a year on and Lonmin employees are on strike again over pay.

The strike, which began a week ago stretches across Lonmin, Impala Platinum (Implats) and Anglo American Platinum (Amplats). It has been declared legal and has been peaceful thus far.

Lonmin estimates that it is losing 3,100 ounces of platinum production per day while the strike continues.

When asked about the striking employees and the impact of a loss of wages on their families, chairman Roger Phillimore told shareholders, ‘We didn’t go on strike, they chose to, and there is the principal of no work, no pay.’

‘It’s our view that their demands are unreasonable and completely unaffordable.’

The workers, represented by the relatively new union Association of Mineworkers and Construction Union (AMCU) are asking for a monthly minimum wage of R12,500.