October 30, 2013 by Owen Bennett-Jones
Published in: Uncategorized
Tweet
Email this 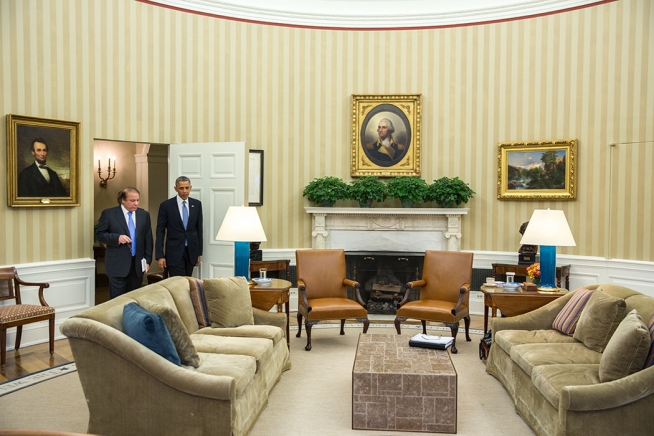 It was a case of the public statement versus the leak. After his meeting in the White House Nawaz Sharif said he had given Obama the clearest possible message: ‘I also brought up the issue of drones in our meeting, emphasising the need for an end to such strikes’, he said.

Of course, the White House knew that was coming which presumably explains why the leak was timed so that Sharif could read it as he was driven up Pennsylvania Avenue.

Between 2007 and 2011, the Washington Post reported, the CIA had not only been briefing Pakistan on the drone strikes but – according to the documents – Pakistani officials also selected some of the targets.

The spat raises once again a tricky question: when formulating national policy on drones which Pakistani authorities count under international law? The politicians or the military?

Because even as Pakistani politicians in recent years have rallied domestic and international opinion against the drones, the Pakistani military granted the Americans permission to fly them from the Shamsi air base in Balochistan. Shamsi was only denied to the Americans in 2011. It was an absurd position on so many levels.

Most obviously the provision of the air base – even if it was, as some claim, only for intelligence gathering by drones – contradicted stated government policy. Government ministers then further confused the situation by sometimes conceding that, as well as condemning the drone programme, Pakistan was also cooperating with it.

And the politicians’ uncertainty was matched by the military’s inconsistency. After all the complaints about drones, in April this year General Musharraf admitted that he had given clearance for some strikes.

The deceptions became convoluted in the extreme. There were even suggestions in a New York Times report earlier this year that the Pakistani military attacked a target in the tribal areas and then described the strike as a drone attack which it went on to condemn.

Taken as a whole, the shifting positions seemed like enough for the US to argue that whatever the political rhetoric flying around, it surely had at the very least tacit, and on occasions even explicit, consent to go ahead with the drone campaign. So, Washington claimed, it could hardly be accused of breaching Pakistani sovereignty.

It took the US operations at Salala and Abbotabad to iron out some of the Pakistani inconsistencies. Today Shamsi is not being used by the Americans and the government is consistent in its condemnation of drones. It is surely no coincidence that the Washington Post’s leaked documents do not refer to anything after 2011. That’s when there was a change of policy.

The army’s position, however, remains opaque. Reports have it that General Kayani has said to Pakistani politicians, and British ones too, that his military no longer has an understanding of any kind with the Americans about drones. No explicit consent and not even tacit consent.

Others within the Pakistani system say that the US is still giving Pakistan briefings about who – or maybe just where – is being hit as the strikes are happening – implying a degree of cooperation. Given the past uncertainties it would make sense that if the army leadership really does now oppose drone strikes – all of them – then it should say so clearly and in public.

With a capacity of administrative waste that the UN has perfected over many decades, it has organised two special rapporteurs to report on much the same subject at much the same time. Their titles too suggest a certain bureaucratic flair: Ben Emmerson is the special rapporteur on the promotion and protection of human rights and freedom while countering terrorism. Christof Heyns meanwhile deals with extrajudicial, summary or arbitrary executions.

Both have come up with reports on drones – documents that have been presented to the UN General Assembly. And on the question of whether the US drone campaign breaches Pakistani sovereignty they reached broadly similar conclusions.

Heyns: ‘Only the state’s highest authorities have the power to give consent to use force. It is not sufficient to obtain consent from particular agencies or departments of the government.’

Emmerson: ‘…the democratically elected government is the body responsible for Pakistani international relations and the sole entity able to express the will of the state in its international affairs. Suggestions of continued cooperation at the military or intelligence level do not affect the position in international law.’

In other words Pakistan is like everywhere else: parliament makes laws, the government implements them and the army has to do what it’s told.

True, other legal considerations have to be taken into account. Should American officials be able to clearly establish that there is an imminent plot to attack the US – either on the US homeland or by harming US forces in Afghanistan – then it could justify a drone strike in self-defence.

It is far from clear that most of the drone strikes in the tribal areas have been designed to prevent imminent attacks but as Emmerson points out, that all depends on how you define the word ‘imminent’.

But on the sovereignty issue the UN rapporteurs are agreed. International law recognises the policy position not of the army, but of the government. And the US cannot use CIA-to-military deals – or leaks – to trump Pakistani government policy.

In the comment section of our website we ask leading commentators and those expert in their field to comment on the Bureau’s work, its impact and  public policy issues associated with our investigations. The views expressed here are the views of the writer, not of the Bureau.

Owen Bennett-Jones is a consultant to the Bureau.

Orginaly published in The News on October 26 2013.