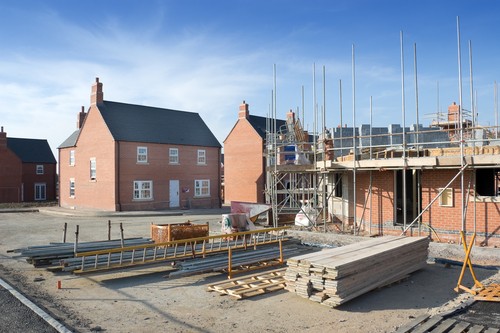 If a developer can show that a council’s affordable housing target makes a development uneconomic, the requirement can be reduced or waived. (Image Housing construction via Shutterstock)

Housebuilders and councils in Britain’s biggest cities are failing to comply with affordable housing targets, and even ripping up legal commitments to build cheaper homes.

A three-month study by the Bureau has established that 60% of the biggest housing developments currently in the planning system are falling short of local affordable housing targets, preventing thousands of cheaper homes being built.

Affordable housing includes social, rented and shared ownership for specified eligible households that can’t afford to buy or rent on the open market.

Related story: Get the data: the crisis in the UK’s affordable housing supply system

Leslie Morphy, chief executive of the homelessness charity Crisis, says: ‘With homelessness on the rise  and millions of people languishing on housing waiting lists, we  must do more to increase the supply of affordable homes. This is not just a numbers game, but about creating mixed, vibrant communities and avoiding ghettoisation of rich and poor.’

In London, where the number of people accepted as homeless stands at 14,812, one of the largest developments going through the planning system shows less than 17% of the planned 15,000 units will be affordable. This is despite Lambeth, one of the two councils involved in the 195-hectare (480-acre) development in south London, stating to its tenants council two years ago that affordable housing could account for 35% of new units built in its section.

‘When developers make very large profits and yet cite viability as a reason not to build more affordable homes, common sense tells you there is an anomaly’ – M
ichael Edwards, UCL senior lecturer

Pete Robbins, Lambeth council cabinet member for housing and regeneration, says: ‘We are serious about delivering a high level of affordable housing in every new development that comes forward in Lambeth. But this is much harder now because of the viability tests that give… developers a chance to avoid our affordable housing targets. We continue to work hard to maximise affordable housing levels, but the bottom line is that our hands are increasingly tied.’

Affordable housing targets set by councils are based on local demand and supply, the costs of housing locally and local wages. The targets are usually expressed as a percentage of new housing supply. The targets are not legally binding, and if a developer can demonstrate through a site-specific financial viability test that the target makes a development uneconomic, then the requirement can be reduced or waived.

Related story: How we did it: tracking affordable housing

As the housing crisis intensifies, the Bureau found repeated examples of housebuilders and property consultancies winning council permission to significantly reduce the number of affordable homes using economic viability assessments based on projections which state that schemes will only be marginally profitable.

The Bureau’s analysis of St George – part of the Berkeley Group – one of the UK’s most successful developers, showed it used financial viability assessments which repeatedly persuaded local authorities that increasing the number of affordable homes in its schemes would stop it meeting ‘industry-standard’ profit margins of between 17% and 20%. St George’s published accounts show that in the six years to 2012 its margins averaged 25.5% and its accumulated after-tax profits were £268m.

Michael Edwards, UCL senior lecturer in the economics of planning, says: ‘There are well-acknowledged systemic problems with the viability system. It is not functioning in a way that necessarily reflects economic reality. When developers make very large profits and yet cite viability as a reason not to build more affordable homes, common sense tells you there is an anomaly. And the public can’t test whether the assumptions contained in viability assessments are fair because the assessments are confidential.’

This ‘anomaly’ arises because viability assessments are based on a site’s projected profit, with little reference to the individual developer’s financial circumstances.

There is nothing to suggest St George or any of its related entities has failed to comply with planning conditions. The company says it is committed to delivering 2,000 affordable homes, linked to its housebuilding pipeline, and it has already delivered thousands of affordable homes. In addition, it has contributed £76m to local infrastructure beyond the supply of affordable housing, such as roads, schools and green spaces.

The company says anticipated profit figures are only one factor in deciding viability and are independently assessed according to industry benchmarks. It believes it is wrong to compare overall pre-tax profits with the development margin on an individual site. Greg Fry, chairman of St George, says: ‘Councils independently assess the viability of a project based on the site in question, regardless of who might develop it or how profitable they are. The profitability of the developer has no bearing on the level of affordable housing required on a site.’

Sir Edward Lister, deputy mayor of London responsible for policy and planning, says that while the priority is to get new schemes off the ground, the mayor would intervene in future to raise affordable  housing numbers if it was shown that developers were making disproportionately large profits: ‘I’m not trying to defend the property industry, but I do believe they have been through a bad time and I believe it’s more important to get building moving. Fifteen or 20% of something is better than nothing.’

In Birmingham, not one of the nine biggest schemes assessed by the Bureau meet the 35% affordable housing target. In one planned 353-unit project, even the allocation of 12 affordable units – just 3.4% of the scheme – is considered ‘unviable’ by planning advisers representing the developer.

Councillor Ian Ward, deputy leader of Birmingham city council, says affordable housing targets haven’t been met because major developments in the city centre focus on affluent urban professionals. ‘Requirement to provide affordable housing is lower in this area than for other areas of the city, as there is less demand for family accommodation,’ he points out.

But freedom of information disclosures obtained by the Bureau show that over five years more than 2,300 affordable homes have been axed from housing schemes across the UK even after builders and councils signed off section 106 legal agreements specified these homes must be built. Section 106 is a clause within the 1990 Town and Country Planning Act that provides a mechanism to recoup contributions from developers for infrastruture requirements to enable a scheme to go ahead. It has become the main way affordable housing is delivered. But under new legislation that came into force in April, developers now have the ability to fast track challenges against a ‘section 106’ if it can show that building the low-cost homes required makes a scheme unviable.

In Cheshire, a council decision to allow a consortium of leading housebuilders to axe 252 affordable homes in the 1,200-unit Winnington Urban Village in Northwich after legal sign-off has ‘opened the floodgates’ to developers requesting similar reductions, says Labour councillor Brian Clarke. Cheshire West and Chester council says that under the revised arrangement, money for affordable housing ‘will be available if the development can afford it’.

In south Devon, research by the Bureau shows that 109 affordable homes have been scrapped after legal sign-off. Anne Fry, an independent Teignbridge district councillor, warns: ‘Developers are  just picking us off at the moment.’ She says she and her colleagues struggle to cope with the technical demands of developers seeking to reduce affordable housing contributions.

The district council states: ‘Teignbridge has not lost 109 affordable homes through the s106 process – those homes would never have been provided because the developments were not viable. By demonstrating flexibility and an awareness of market conditions, Teignbridge has ensured the delivery of a viable level of affordable housing.’

Councils are bracing themselves for a big increase in retrospective appeals by housebuilders. These will come as 10 of the biggest builders – which between them own enough land to build 323,493 homes – together made pre-tax profits of £1.1bn last year, according to Bureau analysis.

The burden to maintain low-cost housing supply is increasingly being left to housing associations. Yet Chancellor George Osborne’s spending review in June announced that housing associations would receive only £3.3bn in the three years from 2015, which amounted to a cut of 2.2% on top of the overall 63% funding reduction made in 2010.

Data in June showed the number of affordable house building starts backed by the government-funded Homes and Communities Agency and the Greater London Authority in the financial year to 2013 was 36,206 – 33% lower than when the coalition came to power.

‘In high-value areas the problem social landlords face  is access to land, and section 106 agreements gives them access to these sites,’ says Rachel Fisher, National Housing Federation head of homes and land. ‘Local councils therefore have a responsibility to their communities. They must ensure that the planning system continues to take into account what local people and families need – and be committed to delivering these homes.’

Additional  research by Victoria Hollingsworth and Jude  McArdle at the Bureau of Investigative Journalism thebureauinvestigates.com