July 17, 2013 by Maeve McClenaghan
Published in: Uncategorized
Tweet
Email this 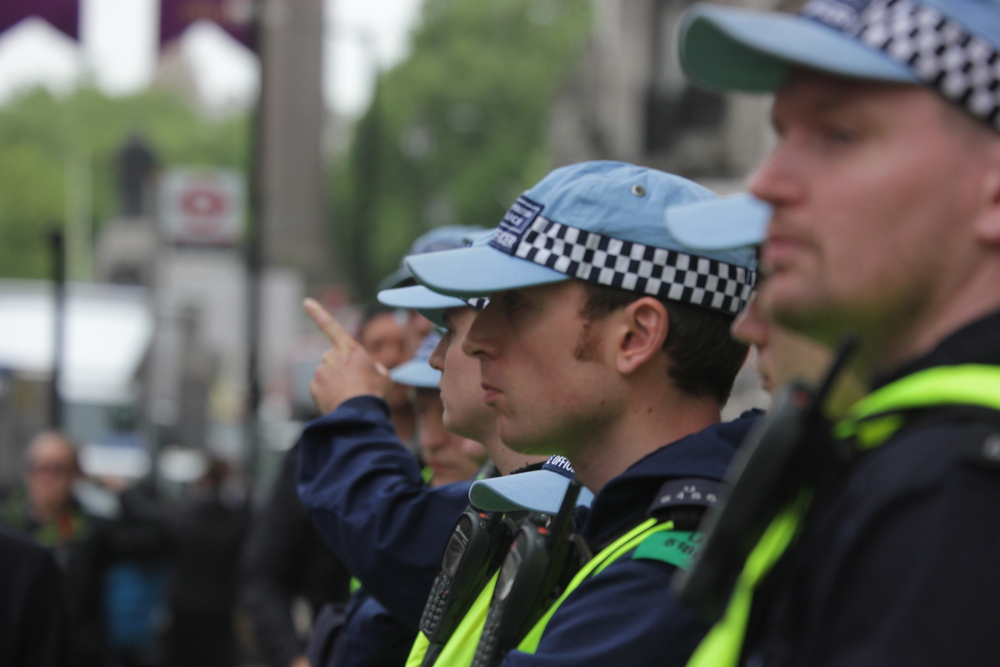 Police are trying to keep numbers on the frontline, but sharp cuts have occurred beyond the public’s gaze. (Image: UK police via Shutterstock.com)

Cuts to the police have left forces with up to 12% fewer officers since 2010 and up to 24% fewer support staff, leaving some forces resorting to short-cuts to cope with workloads.

Previous research published by the Bureau found budget cuts were impacting each police force differently, leading to some forces increasing the time it took them to get to 999 emergency call outs, and others failing to answer as many 999 telephone calls as they did before the cuts took hold.

Now, in the second part of the Bureau’s investigation into how cuts are affecting the police, we look at other areas of impact. Again there is no national picture as each force has directed its own cuts.

Nearly a fifth of forces have lost more than 10% of their police officers between 2010 and 2012, with three forces – Warwickshire, Cleveland and Derbyshire – losing over 12%. Derbyshire lost 254 officers, Cleveland 204 and Warwickshire 122.

Staffing cuts have hit even harder for ‘civilian’ support  staff, with over 12,000 jobs lost between 2010 and 2012. This is equivalent to 16% of their total number. Over a quarter of England and Wales police forces have lost more than 20% of their civilian staff. A handful of forces have plugged the gap by outsourcing to private companies.

Surrey was the only force to increase its police officer numbers since 2010, increasing them by 6%, and only the City of London has increased the number of civilian staff.

Cuts to police numbers have left many in the force feeling over-worked and a number of officers interviewed by the Bureau reported that police morale was at an all time low.

In February 2013 a pilot study of well-being in Avon and Somerset police force, conducted by the University of the West of England, revealed that nearly a third of police officers there were considering voluntary severance as a way out of the job.

Related story: Police forces are taking up to 30% longer to react to 999 calls

Police officers cannot be made redundant but can be forced to take compulsory retirement after 30 years of service. This often means forces needing to cut staff are forced to cut their experienced officers.

This is perhaps one reason why it is in the inspectors rank, the first tier of management, that numbers have been reduced the most.

The number of officers in the  inspectors rank has fallen by 9% between 2010-2012, by comparison sergeant ranks fell 8% and constable ranks fell 6% in the same time period.

Inspectors hold responsibility for overseeing the work of sergeants and constables, and given the cuts many now have more people to manage.

Inspectors hold responsibility for reviewing those held in police cells, known as custody suites. It is the inspectors job to check on the detainee and sign off confirming that suspects are being held safely and legally. With fewer inspectors overseeing the same number of detention centres, some inspectors now do these checks over the telephone, rather than face-to-face, making it harder to ascertain the physical and mental state of the detainee.

Police officers in Devon and Cornwall, Bedfordshire and North Yorkshire all reported inspectors doing custody suite checks over the phone.

‘It is really important to be able to go into the cells and speak to the individuals and also see them- because it is not always just in what they say but how they act,’ explained Steve White, Vice Chair of the Police Federation.

A telephone review involves taking a detainee from their cell to a telephone, so that they can discuss their detention with an inspector.

‘So they still need the staff to take people out of the cells and supervise them using the phone. So really it’s robbing Peter to pay Paul,’ said White.

Detainees are still checked by custody officers, as well as being reviewed by inspectors. However, custody suite officers are also reporting increased pressures according to as yet unpublished research done by Dr Jonathan Houdmont of the University of Nottingham.

A survey of over 900 custody officers showed the majority reporting high levels of understaffing and 73% of those surveyed said times when they felt overloaded by the number of detainees going through the system were occurring with increased frequency.

In many instances it is the backroom police staff who are responsible for putting case files together: collating vital evidence needed to secure convictions.

With police staff numbers cut, the administrative duties in many forces are now pushed to police officers, who are still expected to fulfil their regular duties.

North Yorkshire has seen reductions to its back office administration staff of 21%. ‘We’ve lost a lot of case builders [staff responsible for collating evidence files],’ explained sergeant Mike Stubbs. ‘Some stations, like Northallerton, no longer have any case builders there, it’s left to officers to do that work. There are obvious problems with that – if you are working nights but need to contact someone to get a further statement you have a problem, you can’t just call someone at 3am,’ he explained.

‘We’re starting to see lapses in the quality of reports,’ explained Peter Singleton from Merseyside Police Federation. ‘Reports on things like minor domestics will go in the next day instead of the day they should, officers will take longer chasing up further statements.’

A civilian support worker from West Yorkshire, who asked not to be named said, ‘The cuts to police staff are meaning that officers are having to do more for themselves including inputting crimes. As the officers are less practised at the inputting [of information into databases] they do tend to make more mistakes.’

This week Her Majesty’s Inspectorate of Constabulary released the report, ‘Getting cases ready for court’, which analysed six police forces and found them to be regularly failing to prepare the case papers, needed to send a suspect to trial, correctly. Key witnesses were listed inaccurately, relevant details were often missing and attention to detail was ‘poor, especially in relation to vulnerable victims.’

The police body also noted information was being copied and pasted between documents, meaning in some cases confidential information, such as a victim’s address, was handed out to external parties during the disclosure process.

This decline in quality of reports has an impact further down the line, when lawyers come to try to secure convictions in court. Andy Brumhill is Director of the firm First Law Partnership. He explained: ‘The quality of police evidence is getting worse, I had a case recently where a girl was accused of going equipped to steal. She didn’t turn up to trial but two police officers showed up to give evidence against her and there was no challenge or cross examination, because she was not there. But the quality of the evidence provided by the police was so bad the case was thrown out of court and she was acquitted.’

In some areas of the country, officers report that cuts to staffing are also compromising the way police work. One police officer in the east of England, speaking under condition of anonymity, told the Bureau how he regularly faced challenges due to under-staffing and weak-points in rotas.

The sergeant explained that he felt concerned about a recent incident where he had to delay sending back-up to an officer for 20 minutes due to a shortage in staff. ‘Recently I had a officer call for back up at 07:40hrs but all my units were all tucked up with a large scene – I had no one left so I had to wait to the 8am starts [the next shift of officers to come in] came in before assisting this officer,’ he said.

‘Being a police officer on this front line is not a good job anymore,’ he added.

Singleton said he was concerned about the welfare of officers in Merseyside. ‘We’re sending people out without lunch breaks- so you’ve got people driving police cars hungry and tired at 70mph,’ he said.

With staffing rotas stretched to their limits some forces have increased the frequency with which they send out police officers alone, rather than in pairs.

A female police officer, who wished to remain anonymous, told the Bureau about the moment she was assaulted after attending a call out by herself. She was sent out to attend to a woman behaving in a drunk and disorderly manner.

‘Being a police officer is not a good job anymore’

‘I had placed the offender in the back of a police vehicle and arrested her for drunk and disorderly then it all went horribly wrong. The offender gripped hold of my stab vest and wrapped her hands around the cable to my earpiece and began pulling,’ she explained.

‘She was trying to bite and scratch me – I couldn’t transmit anything because my ear piece had fallen out and I couldn’t see or feel my panic button as I had to concentrate on holding the females hands and stop her pulling me into her zone where she would have assaulted me.’

Merseyside, which has lost over 400 officers, is sending officers out alone with increased frequency, as is Bedfordshire. West Midlands police force has been sending officers patrolling alone since October 2012.

Where the knife falls

As each police force sets its budgets separately many are choosing to trim money from different areas.