June 28, 2013 by Melanie Newman
Published in: All Stories, Corporate Watch
Tweet
Email this 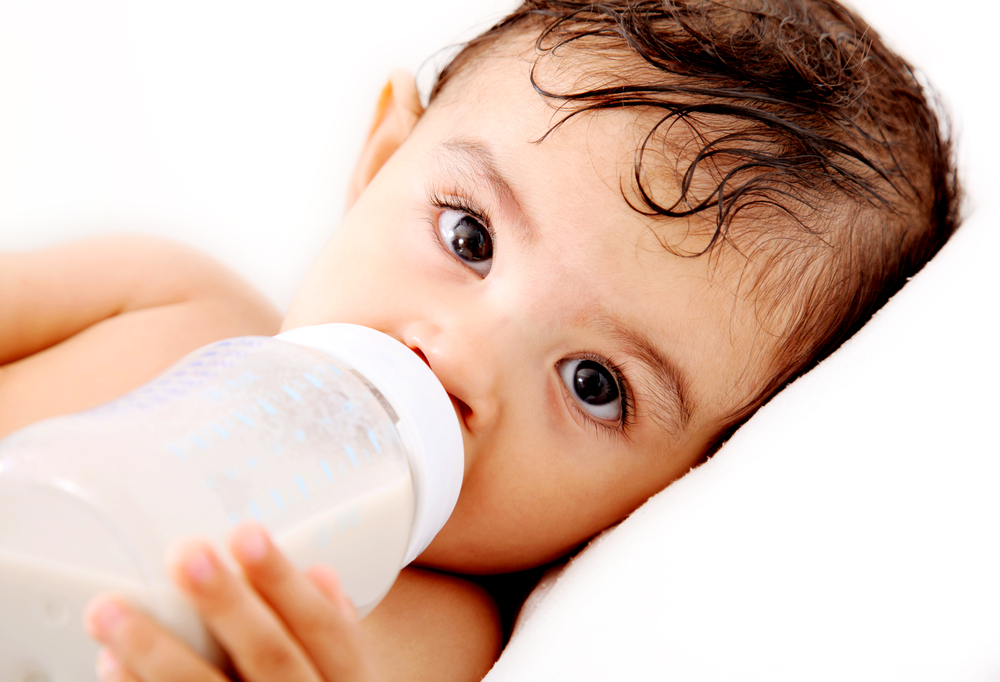 It was May 2011, just a few hours after the birth of Sezai and Hilal Ozan Zeybek’s first child, their daughter Azade, in Turkey.  They were getting unwanted text messages from Bebelac, a baby milk brand owned by Danone.

‘For a couple of weeks, they sent us useful messages with no reference to formula at all. They underlined the importance of breastfeeding. Then the messages subtly changed’, Sezai says.

‘They started warning us against under-nourishment. We were told: “If you think your baby isn’t getting enough nutrition you can call our hotline.”‘ As the young couple’s daughter grew, the warnings continued.

‘We were told that after six months the baby would need 500ml milk. If the mother couldn’t deliver it, we were advised to use supplements. We never called the hotline but the messages kept coming. They were very disturbing,’ Sezai says.

Sezai and Hilal were just one couple on the receiving end of a massive and very successful campaign in Turkey by multi-national food company Danone, which owns baby milk brands Milupa, Aptamil and Bebelac.

The initiative tells mothers to give 500ml breast milk to their children once they reach the age of six months and to use formula if they don’t have enough. It was a campaign that dramatically increased sales of Danone infant formula in Turkey, but have lead to breastfeeding mothers moving their babies on to powdered milk unnecessarily.

The story of the campaign – which Danone describes as a breast milk education programme – begins in 2009 at Numil, the company’s baby nutrition arm in Turkey. With a population of 73 million, a relatively high birth rate and salaries on the rise, the potential for expanding Turkey’s infant nutrition market was huge. But most mothers, like Hilal Ozan Zeybek, were not buying formula.

A higher percentage of mothers breastfeed in Turkey than in the UK, and on average they also breastfeed for much longer. But Turkish mothers also have a tradition of introducing cows’ milk and solid foods before the age recommended by the World Health Organisation (WHO) of six months – a practice that may lead to babies taking less breast milk.

We were told that after six months the baby would need 500ml milk. If the mother couldn’t deliver it, we were advised to use supplements. We never called the hotline but the messages kept coming. They were very disturbing.
Sezai Ozan Zeybek

To check what was happening once the children reached six months of age, Numil enlisted 577 paediatricians to measure mothers’ breast milk provision.

The doctors used pumps – a method the UK’s Royal College of Paediatrics says is unreliable – or weighed the babies before and after feeding.

Their findings, which have not been peer reviewed, found that mothers were feeding 290ml breast milk per day on average.

‘It should have been over 500ml’ says a Danone blog, adding that the company arrived at the figure by working with the WHO.

Breast feed on demand
The WHO has denied this, pointing out that its advice for six-months-old babies – which is supported by most international experts – is breastfeeding on demand while gradually introducing solid food.

‘The WHO does not make recommendations in terms of volume of breast milk,’ said Joao Breda, the WHO’s programme manager on nutrition.

It transpired that the 500ml figure was deduced from a WHO bulletin on infants’ need for food in addition to breast milk (complementary food). One paper quoted in the bulletin referred to research showing that infants receive, on average, 413kcal of breast milk, a figure the authors used to calculate how much additional food might be required.

Danone took the same average breast milk figure and converted it into millilitres.

‘The recommended amount of energy from breast milk was estimated to be 413kcal, the equivalent of at least 500ml,’ Danone says.

Experts have disputed the company’s conclusion that an observed average is the same as a recommendation, pointing out that the paper was not designed to prove how much breast milk children need.

There is no scientifically validated on-line test for breast milk volume that we are aware of.
Professor Mary Renfrew

An awareness campaign aimed at healthcare professionals and parents followed, which said children over six months needed 500ml breast milk. It used the slogan ‘Her Gun Yarim Litre‘ (Half a Litre Every Day).

Danone claimed in advertisements, articles, seminars to mothers and presentations to investors that the 500ml was a WHO recommendation. In material handed to healthcare professions the firm used the WHO logo. It also claimed that UNICEF supported the campaign.

The campaign suggested that mothers use formula to make up any shortfall, though UNICEF advises that bottle-feeding may lead to babies taking less breast milk.

The Bureau recorded a free infant nutrition seminar held at a Baby World store in Istanbul on 12 May 2013. In this workshop a Danone nutritionist recommended formula for children not being given enough breast milk and distributed Aptamil samples.

One TV advertisement said: ‘Your baby needs at least 500ml breast milk every day. If your breast milk is not enough, give Aptamil formula to support your baby’s immune system.’

Danone’s website also contains endorsements, under the ‘Her Gun Yarim Litre’ slogan, from satisfied mothers who say they have given Aptamil to their babies from the age of four months because their breast milk was insufficient.

Testing breast milk
At the heart of the campaign was an online test, which Danone claimed could check if mothers were providing 500ml. Initially called Sutum Yeterli Mi? (Is my breast milk enough?), it was later changed to Bebegimi Dogru Besliyor Muyum (Am I feeding my child correctly?). An official company Facebook page offered discounted Aptamil or free baby bottles in return for taking the test.

Numil says in the early stages of the campaign more than 19,000 mothers responded, of which 71% were said to be giving less than 500ml. The website advises these mothers to use formula. 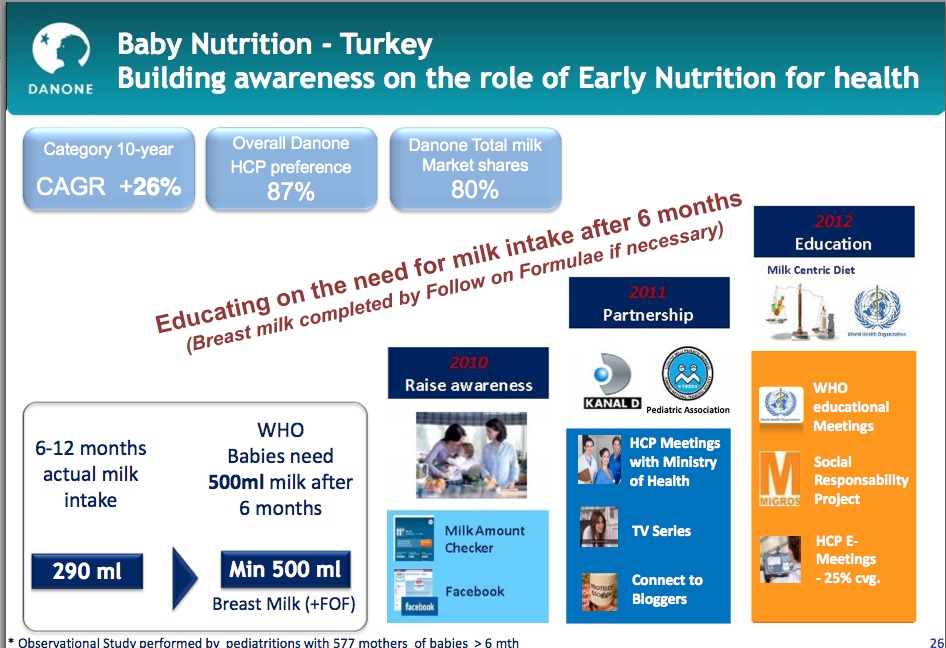 Most experts agree that measuring the amount a child takes from the breast is extremely difficult. Professor Mary Renfrew, professor of mother and infant health at Dundee University and a board member of UNICEF UK, says: ‘There is no scientifically validated on-line test for breast milk volume that we are aware of.’

She adds: ‘Breast milk varies in composition according to the age and stage of the baby and through the day. So 50mls of milk at one point in the day will have very different composition from 50mls of the same mother’s milk at another point. Using a set amount is not relevant. It is also very difficult to measure accurately.’

Introducing doubt
And several experts have expressed concern about the Danone campaign. Dr Gonca Yilmaz, director of paediatrics at the Dr. Sami Ulus Training Hospital in Ankara – one of the largest paediatrics departments in the country –  says: ‘It is influencing mothers to doubt whether their breast milk is sufficient.’

Any public health advice to mothers that questions the quality or quantity of their breast milk is controversial.

Many international studies have shown that the most common reason mothers give for stopping breastfeeding is fear that their milk is not meeting their babies’ needs.

During the baby milk scandals of the 1970s, formula companies were criticised for telling parents that ‘when mother’s milk is not enough, our product will help to make up the difference’.

Danone says that mothers’ estimates of their daily breast milk provision rose to 337ml from 214ml during the campaign, though no further details of these findings have been made public.

The company, which markets semi-solid products in Turkey for children aged four moths, also said it had contributed to a 17-year rise in rates of exclusive breastfeeding during the first six months of a child’s life.

‘Numil follows Danone’s global policy, which in line with the WHO recommends exclusive breastfeeding for the first six months,’ it says.

The Turkish National Paediatric Association, with which Danone has previously worked, supports the campaign. ‘This is our third year of collaboration’” it said. ‘Over the years, we have observed that Danone (Numil) has the ultimate aim of increasing breast milk usage for babies.’

But Turkish pediatrician Dr Yilmaz suggested that supplementing with formula would not address the problem of early complementary feeding. Instead she suggests increasing: ‘awareness of the importance of breastfeeding exclusively for six months.’

Whatever the intention behind Danone’s campaign, its effect on formula sales has been noteable.

Soaring sales
By the end of last year Numil was the most successful of Danone’s European Baby Nutrition branches, with its general manager citing 26% growth.

And at an investor meeting in Paris in 2012 Danone’s vice chairman and deputy general manager Emmanuel Faber described a ‘radical’ increase in numbers of healthcare staff advising parents to buy Danone products as a result of the campaign.

The 500ml initiative had reached a quarter of Turkey’s health staff through educational ‘e-meetings’, his presentation showed.

Danone insists it is not competing with breast milk and that sales growth is a result of parents choosing formula over inappropriate foods like rice flour.

But the company’s actions have left parents like Sezai Ozan Zeybek disillusioned.

‘They use the media, chain stores, hospitals, doctors. They offer seminars in almost every city in Turkey and supposedly educate parents. And our doctors prefer not to comment,’ he says. ‘I am a father and I find all this unbearable.’