June 3, 2013 by Jack Serle and Chris Woods
Published in: Uncategorized
Tweet
Email this 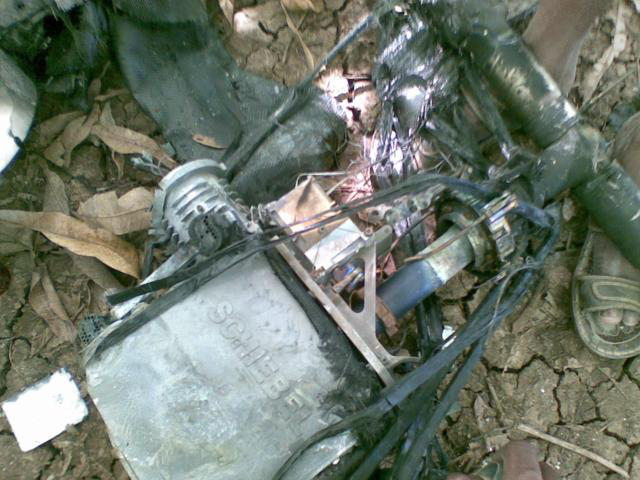 A US drone crashed in al Shabaab-controlled southern Somalia this month
(Photo: Twitter)

A CIA drone attack in Yemen kills four, reportedly including a senior leader in al Qaeda in the Arabian Peninsula

The Pentagon admits a US surveillance drone has crashed in Somalia

The only drone strike reported to hit Pakistan in May killed Wali Ur Rehman, second-in-command of the Pakistan Taliban (TTP). It was the first US attack in Pakistan for 42 days and came less than a week after President Obama set out his new drone policy. In a major speech, the president stipulated that a strike could only target individuals who posed ‘a continuing, imminent threat to US persons’, and that the US did not carry out revenge attacks.

Rehman was a prominent Taliban figure responsible for numerous bloody terrorist attacks within Pakistan. The US also blamed him for the December 2009 Khost bombing in which seven CIA officers were killed. An unnamed Pakistani intelligence officer said his death ‘is crippling for [the Taliban’s] top command’. The TTP held Pakistan partially responsible for the attack, promising ‘revenge in the strongest way’ and pledging, ‘attacks in Pakistan will continue’.

This was the first CIA attack in Pakistan since the elections on May 11. Prime minister-elect Nawaz Sharif had started preparing the ground for peace talks with the TTP. However after Rehman’s death Taliban spokesman Ehsanullah Ehsan said: ‘The government has failed to stop drone strikes, so we decided to end any talks with the government.’

Rehman’s successor, Khan Said (38), was selected hours after Rehman’s death. The attack that killed the Taliban commander, hit a mud-built house in North Waziristan in the early morning. Up to six alleged militants were also killed. They were identified by the Nation as Nasarullah; Shahabuddin; Adil; Nasiruddinand Saeedur Rehman; and Fakhar ul Islam, Rehman’s aide.

Earlier in the month the Obama administration admitted killing four US citizens in covert drone strikes, three in Yemen and one, whose death had previously only been a rumour, in Pakistan. The strike in Pakistan killed Jude Kenan Mohammed on November 16 2011 (Ob255).

The CIA conducted at least one drone strike in Yemen this month, reportedly killing Jalal Balaabed, described at a senior figure in al Qaeda in the Arabian Peninsula (AQAP). He commanded Abyan’s capital, Zinjibar, when the militant group controlled the province in 2011 and 2012. However al Mahfad district security chief Colonel Ahmed al Rab’i said he could neither confirm nor deny Balaabed’s death. The dead man’s relatives also reportedly denied he had been killed.

Three additional airstrikes were reported in May. Two were labelled US drone strikes by a single source. The third, on May 24, was reported either as a US drone strike or as a Saudi Arabian airstrike. The attack hit an area close to the Saudi border in al Jawf province. While most local media sources attributed the strike to the US, several sources said the attack was carried out by Saudi jets. Responsibility remains unclear.

Also in May, a Yemen Air Force fighter-bomber crashed in Sanaa while on a training mission. The Russian-made Su-22 exploded in mid-air over a residential district. The pilot was killed and up to 22 people on the ground were injured. This was the third military plane to crash in the city in seven months. In February another Su-22 crashed in the capital, killing 12 people. And in November an Antonov M26 transport plane caught fire and crashed, killing all 10 on board.

The Air Force was the victim of ‘sabotage’, according to service chief General Rashed al Janad. The latest Su-22 was caused by ‘shots hitting the engine’ as it prepared to land he explained, adding ‘the black box of the aircraft was hit’. The Antonov crashed in 2012 after ‘shots caused a fire in one of its engines’, General al Janad said.

Also this month General al Janad said (Arabic) the US does not notify Sanaa before launching drone strikes. He told al Jazeera he had suffered personally from US attacks when a cousin of his died in a strike in Dhamar province. However an unnamed Yemen Air Force source said the country’s military high command is aware of any incursion by foreign military aircraft into its airspace. Yemeni analyst Saeed Obaid said al Janad appeared to be distancing himself from anger at civilian casualties.

There were once again no reported drone strikes in Somalia in May. But the Pentagon admitted an unarmed US helicopter drone crashed in al Shabaab-controlled territory south of Mogadishu. The US said the aircraft was on a surveillance mission but would not say what kind of drone it was, or why it crashed. The local governor Abdikadir Mohamed Nur claimed militants shot the drone down. He said they were firing at it for hours before it crashed. But the US denied this and al Shabaab only said the drone crashed.

Al Shabaab militants tweeted pictures of the wreckage and in one image Schiebel, the name of a Viennese defence firm, is clearly visible on a piece of debris. Schiebel makes only one model of drone, a surveillance helicopter dubbed the S-100 Camcopter. This revelation prompted some speculation the drone was French, after Paris reportedly test-flew the drone as part of a failed attempt by commandos to rescue a captured French spy in January 2013.

Security remains perilous in Somalia. Al Shabaab killed six people in an attack at the Kenyan border on May 25. A 15-year-old boy, two police officers, a teacher and a Red Cross official were among the bodies. Also in May, UN deputy secretary general Jan Eliasson told reporters the African Union peacekeeping force Amisom has suffered up to 3,000 casualties since it began operations in 2007. The UN quickly backtracked on the statement, and Amisom’s spokesman told Pentagon-funded news site Sabahi Online the peacekeepers had lost fewer than 500 troops.