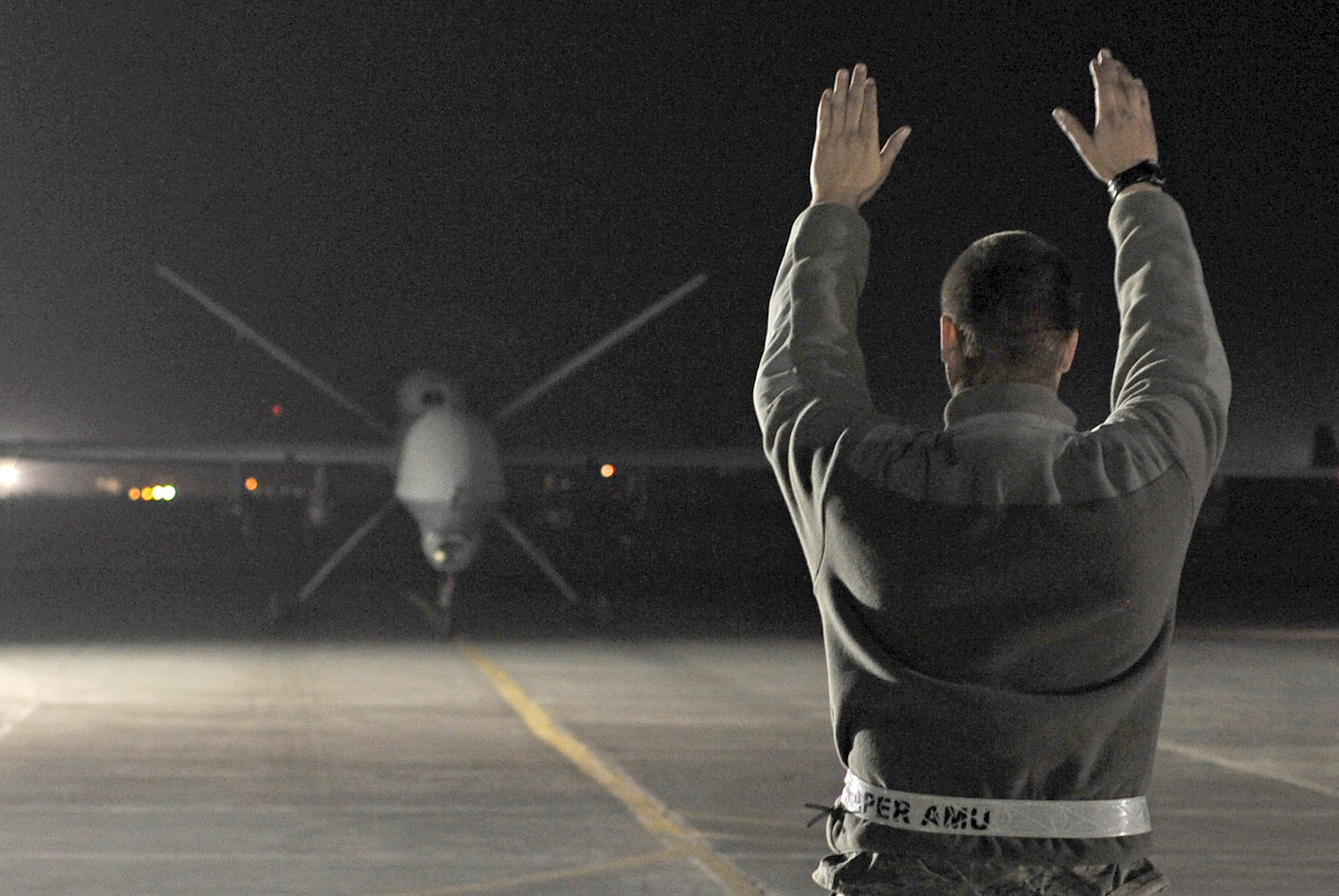 Recent conflicts in Afghanistan, Libya and Iraq have seen almost 1,200 drone strikes over the past five years, according to new data released to the Bureau.

The information, much of it classified until now, shows that US Air Force drones carried out most of the 1,168 attacks. However British crews are also responsible for a significant portion of the strikes in Afghanistan.

The Bureau has obtained data from the US armed forces, Nato and the UK’s Ministry of Defence. It reveals, for example, that more than a quarter of all armed Coalition air sorties in Afghanistan are now carried out by drones.

While only a fraction of those missions result in strikes, drone strikes in Afghanistan are now taking place on average five times each week.

Afghanistan – the US’s most intense conflict
The US’s secret drone campaign in Pakistan and elsewhere is now in its eleventh year and is attracting increasing scrutiny, including academic studies, court cases and, soon, a UN investigation. Ironically, less is known about the use of drones in conventional theatres of war.

The US military and its allies have carried out almost 1,200 drone strikes since 2008 in Afghanistan, Libya and Iraq.

When the Bureau first approached the US military in August seeking drone data for recent conflicts, we were told the information was classified. Central Command (Centcom) later relented after the Bureau argued there was a strong public interest in releasing the information.

Centcom now says it is committed to publishing statistics on the number of missiles fired by drones in Afghanistan, as part of its monthly reports. 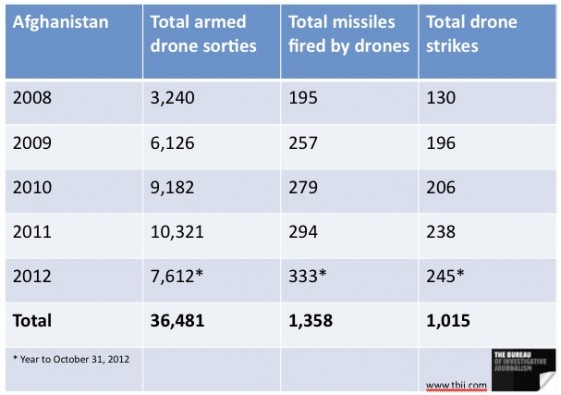 The newly declassified figures provided to the Bureau show armed drones flown by the Coalition have carried out 1,015 drone strikes in Afghanistan since 2008. This is three times more than the 338 attacks the CIA has carried out in neighbouring Pakistan over the same period.

For context, there were an additional 1,145 attacks by conventional aircraft in Afghanistan during that period, official figures show. The proportion of airstrikes carried out by drones has risen steeply to 18%, up from 11% in 2009.

While no British drones went to Libya, the MoD has revealed British pilots had flown US drones in the campaign.

While Coalition drones fly thousands of armed sorties in Afghanistan, drone strikes are ‘the exception, not the norm’, a Centcom spokeswoman told the Bureau.

The number of strikes has increased steadily year-on-year – but there is ambiguity over who is carrying them out. The majority are by the US Air Force, with the remainder by the British military and – possibly – US Special Forces. Here there is some confusion.

A senior US Army spokesman said: ‘Of the thousands of UAS [unmanned aerial systems] we have, only a very small number (well less than 100) are armed.’

But another senior US military official, speaking on background terms, said: ‘The Army doesn’t have UAVs [unmanned aerial vehicles] in service that carry munitions… Any UAVs that can carry munitions are/were under the charge of the Air Force in Afghanistan and Iraq.’

Military officials were unable to explain the discrepancy between the two statements. The Pentagon’s Joint Special Operations Command (JSOC) has its own classified fleet of Reaper drones, however, which may account for the apparently contradictory statements.

In Afghanistan drone strikes are ‘the exception, not the norm’
US Central Command spokeswoman

Britain’s small, active fleet
The UK’s drone fleet in Afghanistan is small compared with that of the US – Britain will shortly double its number of Reapers from five to ten aircraft.

Yet British-piloted aircraft launched a high proportion of the total missiles fired from drones.

The Ministry of Defence (MoD) has released new data on the number of missiles fired in each of the past five years. In 2011, almost four missiles of every ten fired by drones in Afghanistan were the work of UK forces, the new figures indicate. In 2010 and 2012 the proportion was over a quarter. An MoD spokesman pointed out that the rate of missiles released in comparison to total hours flown had fallen significantly from its peak in 2008.

The MoD refused to reveal the number of strikes it had carried out, and indicated it would be inaccurate for the Bureau to infer a number of attacks by comparing British data with Centcom’s more complete numbers, ‘because of differing rules of engagement’.

‘Protecting civilians is the cornerstone of our mission. The use of all Afcent weapons and methods are tightly restricted, carefully supervised, and applied by only qualified and authorised personnel.’
US Air Force spokeswoman

The missing numbers
The US has so far refused to release casualty data for its drone campaigns, although an Air Force spokeswoman insisted that ‘protecting civilians is the cornerstone of our mission’. She added: ‘The use of all Afcent weapons and methods are tightly restricted, carefully supervised, and applied by only qualified and authorised personnel.’

Only Britain has issued estimates of the non-combatants it has killed. According to officials at the Ministry of Defence, four civilians have died in UK-piloted drone strikes in Afghanistan – although campaigners such as Drone Wars UK have questioned this figure.

A ministry spokesman said: ‘Every effort, which includes in some circumstances deciding not to release weapons, is made to ensure the risk of collateral damage, including civilian casualties, is minimised.’

Although Britain has not officially estimated the number of militants killed, prime minister David Cameron told reporters in December 2010 that by that point UK drones ‘killed more than 124 insurgents’. More than 200 missiles have been fired by British drones since that date.

Libya: a short, bloody campaign
In contrast to the long-running Iraq and Afghanistan conflicts, figures supplied by Nato and the Pentagon on last year’s Libyan air campaign give an insight into the brutal intensity of that short conflict.

Nato provided the Bureau with figures for the operation, first published in a letter to the head of the UN’s investigation into Libya in January 2012. Differences in how data is recorded makes it difficult to draw a comparison  between Libya and other recent campaigns. What is clear is that armed drones played a small yet significant role.

Prime minister David Cameron in December 2010 said UK drones ‘killed more than 124 insurgents’. Since then more than 200 missiles have been fired by British drones.

In April 2011, the US announced it was sending Reaper and Predator drones to Libya as part of Operation Unified Protector. ‘They are uniquely suited for urban areas,’ Marine General James Cartwright, the vice-chairman of the Joint Chiefs of Staff, told a press conference at the time.

While no British drones went to Libya, the MoD later revealed British pilots had flown US drones in the campaign.

Nato aircraft – piloted by the US, France and UK – flew around 18,000 armed sorties during the brief campaign, firing 7,600 missiles.

A tiny proportion of these armed missions – 250 in total – were flown by drones. US Predators flew 145 strike sorties, according to a Department of Defense briefing published in October 2011. A Nato spokesman explained ‘strike sorties’ is the term used for ‘identifying and engaging targets’, while armed sorties could also be for surveillance, and carrying weapons for self-defence.

The Pentagon confirmed to the Bureau that US-piloted drones carried out 105 strikes between the start of April and September 2, 2011. This figure does not reflect the full campaign, which continued until October 31. However, it does indicate a very high ratio of strikes to armed sorties – more than one in three total armed missions led to a strike – reflecting the intensity of the Libyan conflict compared to the more drawn-out wars in Afghanistan and Iraq, where drones often fly armed missions without firing weapons.

Following the end of the campaign, in November 2011 Nato secretary general Anders Fogh Rasmussen claimed: ‘We conducted our operations in Libya in a very careful manner, so we have no confirmed civilian casualties caused by Nato.’

But the following month, a New York Times investigation reported 40-70 civilians died in Nato bombings. The findings were supported by an Amnesty International investigation published in March 2012, which named 55 civilians including 16 children and 14 women – all killed in strikes on urban areas, including in Tripoli, Zlitan, Majer and Sirte.

‘We conducted our operations in Libya in a very careful manner, so we have no confirmed civilian casualties caused by Nato.’
Nato secretary general Anders Fogh Rasmussen

But it is not clear how many – if any – of these deaths were caused by drones.

Iraq: a rapid wind-down
The Bureau has also obtained previously classified details of US drone strikes in Iraq for the final years of the conflict.

These demonstrate how swiftly the US Air Force scaled down its drone strikes as withdrawal approached.

The number of armed drone sorties dropped steadily between 2008 and December 2011, when US forces finally withdrew.

There were no US Air Force drone strikes in Iraq in 2010, and just one in 2011. All US military drone sorties in the country have now ceased. 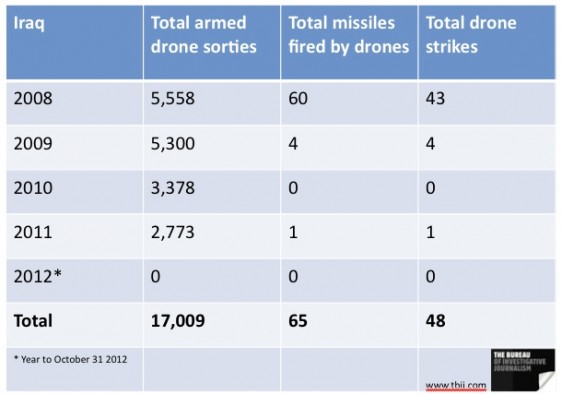