October 29, 2012 by Maeve McClenaghan
Published in: Uncategorized
Tweet
Email this 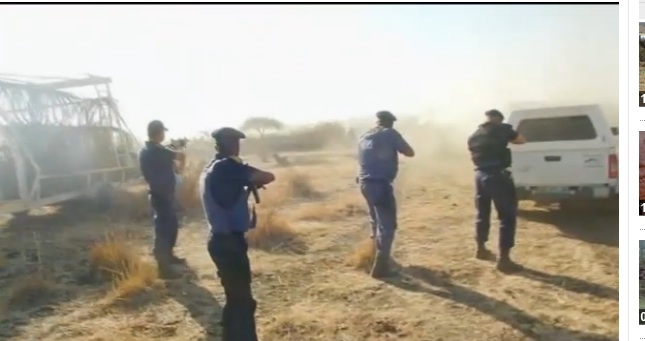 A British lawyer is concerned that South African police are jeopardising an inquiry into the massacre of miners by intimidating key witnesses.

He claims that witnesses to the shooting of 34 striking miners at the Lonmin mine in Marikana are being arrested before giving evidence, compromising the Farlam Commission, the body set up to investigate the violence of August 16.

Law-firm partner James Nichol, one of the lawyers representing the miners and their families, spoke to the Bureau of Investigative Journalism about his concerns and called for British legal observers to oversee the inquiry into the police crack-down.

‘The police have started arresting strike leaders with no particular charges, or under the pretext of “mysterious murders”‘, said Nichol, a partner in TV Edwards LLP law firm, who is working pro-bono in South Africa helping to represent 26 families of the men killed at Marikana. ‘These are men that would have been witnesses to the commission,’ Nichol explained.

Zamikhaya Ndude, Sithembele Sohadi, Loyiso Mtsheketshe and Anele Kola, all former strike leaders, were traveling back from the  proceedings when their taxi was stopped by police and the men were arrested on suspicion of murders that have occurred since the police shootings on August 16th.

Witnesses report that the men were removed from the taxi they were travelling in, hooded and told not to speak, or they would be shot.

According to Teboho Mosikili, an attorney at the Socio-Economic Rights Institute of South Africa (Seri), the arrests came on the instruction of police officers who had witnessed the men’s presence at the commission earlier that day.

”This is a police force on the rampage’ – James Nichols, lawyer

The South African Police Service has denied the arrests are a form of intimidation, telling the Bureau ‘we have no other agenda than to arrest those who are breaking the laws of the Republic.’

However Nichol expressed his concern that the arrests will stop future witnesses from testifying. ‘I can no longer tell people that they can come and give evidence and be provided safe passage,’ the lawyer said. ‘This is a police force on the rampage,’ he added.

Another advocate for the miners, Dali Mpofu has also claimed that five of his witnesses, two of them key witnesses, had been arrested.

This week Mpofu announced the families he represents were considering pulling out of the commission due to a perceived lack of support for the victims and their families. He told Ian Farlam, the retired judge leading the commission, ‘We have found a pattern characterised by many things … treating victims of this matter with such disdain that we can’t continue. There has been a refusal by government to assist representatives of the victims … even with logistical support,’ he said.

The advocate, who is representing over 200 of the Lonmin miners, also claimed that Legal Aid South Africa has refused to provide financial assistance to the arrested miners, some of whom were injured during the violence on August 16th.

‘There has been a refusal by government to assist representatives of the victims … even with logistical support’ – Dali Mpofu, advocate

Earlier this week Nichol wrote to the England and Wales Law Society requesting that it send legal observers to the commission ‘to help ensure that the proceedings remain fair and that, in particular, the South African Police Force is prevented from intimidating miners who are witnesses before the inquiry.’

‘It is important that the commission sees the international community on their backs,’ Nichol explained. ‘We need to show them that people want to see fairness.’

Lonmin
Some workers at the London-registered Lonmin platinum mine, the site of the protest and shootings, are now on strike in protest over the arrest of their colleagues.

Despite agreeing to wage increases that resolved the original strikes Lonmin have faced criticism in their role in the put-down of the protests.

Emails revealed to the commission by advocate Mpofu show Cyril Ramaphosa, a member of Lonmin’s board writing to government ministers and the police, and describing the protests as criminal actions that warranted ‘concomitant action’.

Mpofu has suggested that the sending of the emails, 24 hours before the violence began, may suggest the shootings were not therefore a case of self-defence, as has been claimed by the police, but an orchestrated put-down.

Lonmin replied to the allegations issuing a statement in which it says: ‘Considering the violence and loss of life in the period 10-14 August, Lonmin engaged with a number of stakeholders to ensure that the situation in and around Marikana was addressed in the appropriate manner.’

They go on to state that ‘Lonmin is a mining company and is not responsible for law enforcement.’