October 18, 2012 by Maeve McClenaghan
Published in: Uncategorized
Tweet
Email this 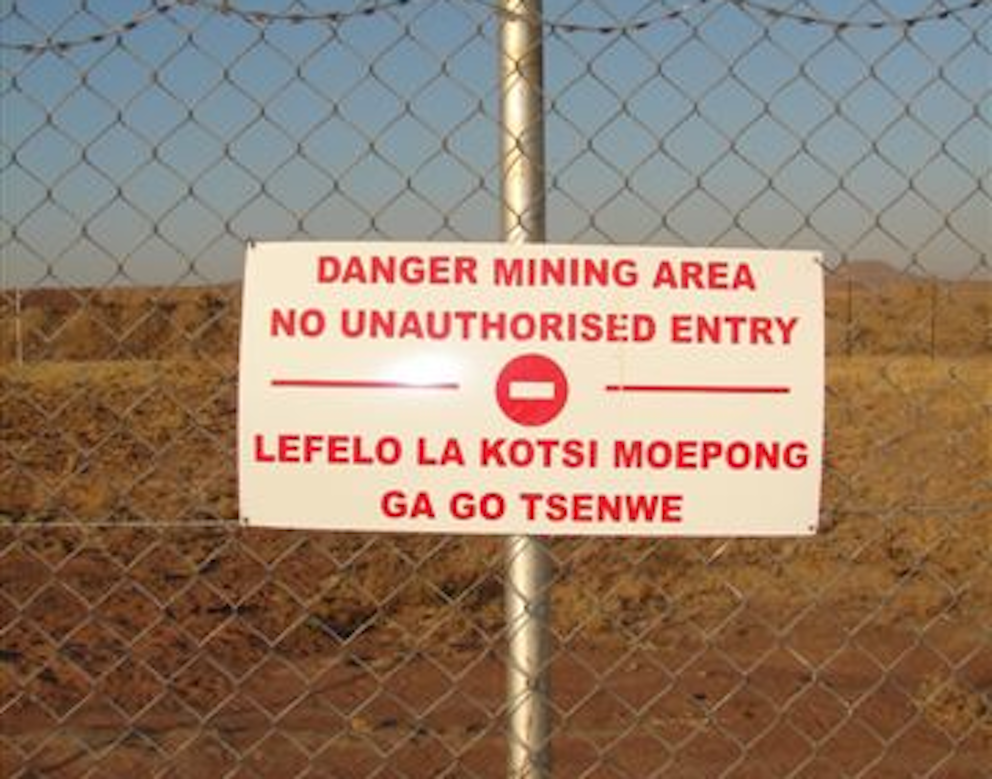 The perils of mining come in many forms (Image: Flickr/Lianne Greef)

As televised images of blue-uniformed police, coldly opening fire on striking workers in South Africa ricocheted around the world, one could not help but be reminded of the state repression that permeated the apartheid struggle of earlier decades.

Since that time, South Africa has built itself a reputation of stability and prosperity, in contrast to many of its neighbours. But that image of stability is now being called into question. The Marikana massacre has awoken the world to a state of civil unrest in South Africa, with recent events marking the highest peak of protests since the end of apartheid eighteen years ago.

On August 16, workers from a platinum mine in Marikana, owned by London-listed mining company Lonmin, were on strike over wage and labour conditions. An armed police unit arrived and opened fire on the striking workers, killing 34 and injuring around 80 more.

Last night five experts on South Africa gathered at the Frontline Club in London to discuss the Marikana massacre and its repercussions. Was this a flashpoint moment that could spark a revolution or just another tragedy amid a sea of bubbling discontent?

Contagion
The Lonmin workers have now resolved their strike, after the company agreed to a pay increase. However the protest and its violent put-down ignited a wave of similar strikes across the South African extractive industries.

Just yesterday police shot at striking workers with rubber bullets at the Bokoni platinum mine. Meanwhile gold producer AngloGold Ashanti suspended its operations in the country when two-thirds of its workforce went on strike last month.

According to reports in the Financial Times Anglo American Platinum fired 12,000 illegally striking miners last month and gold producers Gold Fields are threatening the same to thousands of their striking employees.

In some cases, the reasons for the unrest are clear. Workers in the mining sectors are faced with appalling conditions and low wages. Many companies are turning to contract labour, allowing them to side-step the rights afforded to permanent employees. Add to this the fact that many miners have no choice but to stay in the companies’ single-sex hostels where, according to South African journalist Terry Bell, ‘workers are stacked in bunks like so many artifacts in a museum.’

Many put up with the conditions out of desperation; unemployment in the country is around 40%.

State repression
However, the horror of the Marikana massacre came not just from the conditions faced by labourers, but by the violent way the protests were put down, leading many to question how the police came to react the way they did.

The police unit sent to disperse the Marikana crowds was a specialist squad trained to tackle armed heist gangs. It was sent into Marikana armed with live ammunition.

Jonny Steinberg, a lecturer in African studies at Oxford University, explained to the Frontline Club audience that the level of repression shown by the police could be a sign of President Jacob Zuma stamping his authority over an increasingly fractured country and government. In December Zuma will face a fight for re-election as leader of the African National Congress party (ANC).

‘This paramilitary outfit arrived and turned on protesters. That was a policy decision that happened because Zuma allowed it and wanted it to happen,’ Steinberg said.

The country’s police commissioner backed her force, announcing to the press that the police had nothing to apologise for.

State of the unions
But the politics of this struggle go beyond party political lines: companies and trade unions are locked in an incestuous relationship of their own.

The extractive industry has never been the cuddliest of employers, and it often rests on the trade unions to protect the rights of South Africa’s mining community. Unfortunately the lines between unions and companies have become blurred.

Take for example Cyril Ramaphosa, the trade unionist responsible for building up the National Union of Miners (NUM). Since leaving his role at the union the well-known South African figure has become a lot closer to the industry he used to attempt to regulate. Ramaphosa’s company the Shanduka Group holds 9% of shares in Lonmin, the London-registered platinum miner at the centre of the Marikana protests. The former trade-union leader now sits on the mining company’s board.

James Motlatsi is another case in point. He too was a president of NUM before joining the board of AngloGold Ashanti. He now is chairman of the board of platinum miners Platfields.

The union’s reaction to Marikana has incensed some. Audrey Brown, a producer on BBC Focus on Africa told the audience at the Frontline Club that the NUM’s head excused the police brutality as sending out a strong message ‘that they will not let the country descend into chaos’. Brown added: ‘That was an announcement I heard with speechless horror.’

The problems go beyond an overlap between industry and unions. Structural hierarchies of unions can lead to the sector undermining itself. Despite the different range of skilled labour needed in the extractive process only one union is permitted at the bargaining table: NUM.

Disillusionment is clear. In an apparent move away from the formal unions, miners are now reportedly forming ad hoc workers’ representative groups.

Long term effects
The repercussions of strikes in the extractive industries could have consequences long after the workers return to work.

‘A lot of companies are putting their plans for further investment [in South Africa] on hold,’ said Natznet Tesfay, head of Africa forecasting at Exclusive Analysis.

Ratings agencies Moody’s and Standard and Poor have both downgraded South Africa’s rating since the shootings.

Meanwhile, Steinberg predicted the shootings would shake up voting patterns in the country. Traditionally poor, black citizens have voted en masse. Steinberg predicts the events of Marikana will change that, disenfranchising those voters further. Instead, he argued, the middle classes, who have previously been less inclined to vote, may take up the fight and register their horror at the strike-repression through the ballot box.

A nation at war with itself
In his book Who Rules South Africa, Paul Holden predicts that two million South Africans are involved in some sort of low level protest each year. Indeed, 2012 has brought with it the highest number of protests per month since apartheid.

While the bloody violence of Marikana alerted the world to the miners’ protests, nearly every day there is another skirmish, as the people of South Africa voice their discontent. Unfortunately, sometimes it takes the death of dozens for their voices to be heard.