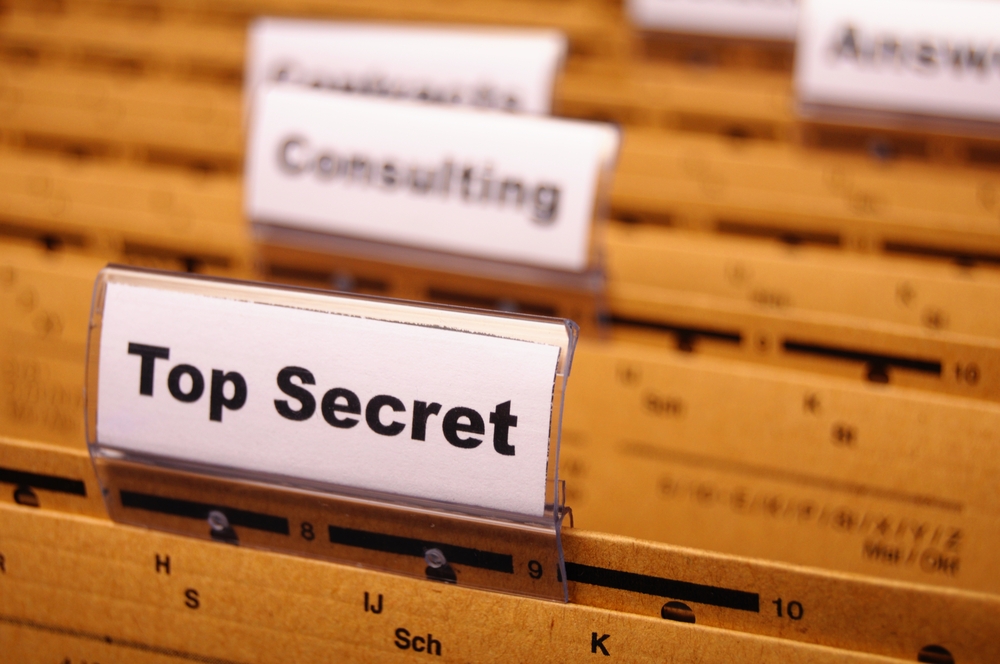 The ‘top secret’ label should be used with care (Image: Shutterstock)

‘Justice must be seen to be done’ is a principle that Britain has contributed to the free world. It was first articulated in 1649 by ‘Freeborn John’ Lilburne, the Leveller, when Cromwell’s judges tried him for treason: they accepted his submission that ‘the first and fundamental liberty of an Englishman’ is that ‘no man whatsoever ought to be tried in holes and corners, or in any place where the gates are shut and barred’.

It is this great open justice tradition, which has made our courts so superior to other legal systems, that Kenneth Clarke is set upon destroying. He plans secret courts, for what his officials admit will be ‘an extremely wide range of civil proceedings’. He is doing this for unworthy reasons – to protect the security services from embarrassment. And he proposes to do it by unworthy means, hiring ‘vetted’ barristers whose private lives and politics will be investigated by the intelligence services they are supposed to oppose.

That the government can contemplate this at all is due to the malign influence of the European Convention on Human Rights. Before it, our law was that laid down by Lord Halsbury: ‘Every court in the land is open to every subject of the King’. European countries were not so fastidious – the Nazis had secret ‘morals courts’ where they persecuted homosexuals, and the Scandinavians were always closing court doors in the interests of privacy. So the European Convention adopted the lowest common denominator, using weasel words that allow courts to be closed in the interests of morality, privacy or national security. Mr Clarke’s green paper is full of boasts that its secret courts will be compliant with the Euroconvention, but it will certainly not be compliant with our open justice tradition.

As Jeremy Bentham put it, ‘Publicity is the very soul of justice. It keeps the judge, while trying, under trial.’

Parliament can, of course, legislate to keep certain information from the public, and there are gagging provisions in the Official Secrets Act. But these have been seriously abused in the past. In 1978, for example, the security services wanted to jail two journalists from Time Out for revealing the existence of GCHQ (which was then an ‘official secret’). They called a witness whose name they pretended was so secret that it would be a crime to reveal it. But this Colonel, H.A. Johnstone, was so well known that journalists wrote it in the sand at Whitby and when Scotland Yard’s Justice Wide Open Special Branch rushed up to arrest them, the high tide had washed it away by the time they arrived. Then an MP (Robert Kilroy-Silk, in his finest hour) said the forbidden name on the floor of the House of Commons, and the Attorney General threatened to prosecute any media organisation – including Hansard – that published it. His bluff was called, but the case shows just how bogus some security service claims can be, and to what extent governments will fall over backwards to accommodate them.

Another example was the attempt to stop the Mail on Sunday from reporting how secret files were being kept on many of Blair’s cabinet ministers. MI5 applied for an injunction against the newspaper at a judge’s home on Saturday afternoon, but the open justice principle meant that this attack on press freedom could at least be reported. Under Ken Clarke’s scheme, this civil action would be heard in secret – the effect would be like a super-injunction.

It is usually Labour governments, full of nervous liberals, who give up liberties under pressure from the police or the spooks. Why is a Conservative government abandoning a proud tradition? Partly because of the upcoming cases where MI6 is being sued over its complicity in ‘rendering’ dissidents to Libya, to be tortured by the brutal Gaddafi regime. The evidence is sensitive because it will be extremely embarrassing, but the public must be entitled to hear it. The government is also under pressure from the US, upset that some of CIA ‘torture memos’ were disclosed to lawyers for Bin Mohammed. The green paper wrongly claims that there is a ‘control principle’ that requires Britain never to reveal the secrets supplied to them by other states. In the Bin Mohammed case however, Mort Halperin, a top US national security advisor, explained that the ‘control principle’ meant only that Britain should do its best to keep US secrets, but would always comply with court orders to disclose them – as would the US if required to disclose ours.

The green paper makes a number of extremely dubious claims. It states that because the government cannot reveal ‘sensitive’ information, it has to settle cases before they come to trial, and so pays a lot of money to undeserving claimants. I do not believe this is the truth, although it has featured greatly in the rhetoric of Messrs Cameron and Clarke.

First and foremost, the government does not settle civil cases because it does not want to expose secret evidence; it settles cases because otherwise it will lose them. It has ample power to keep really secret evidence from disclosure by using a Public Interest Immunity (PII) certificate. And isn’t it interesting that whenever the government does settle cases, it is never prepared to tell the public how much taxpayers’ money it has thrown away? If Parliament were interested in holding the government to account, it would demand to know how much the government was paying in these secret settlements, and whether taxpayers money was being spent to avoid the public embarrassment of losing in open court.

There is another tradition that Mr Clarke is prepared to destroy in order to make his secret courts work, and that is the independence of the bar. Barristers must act fearlessly for their clients, and cannot do so if they are not allowed to talk to them. Mr Clarke proposes that ‘sensitive’ information should not be seen by claimants or their lawyers, but only by ‘special advocates’ – barristers allowed into the secret court to represent clients they are not allowed to meet. They are ‘special’ because they have passed security vetting tests which confirm that the security services find them acceptable – to act against the security services!

This vetting may (although I have grave doubts) be acceptable in the narrow context of immigration appeals: to have civil courts that can be entered only by security-cleared barristers who can’t speak to their clients raises serious issues of ethics for a profession that boasts of its independence. When your fee is dependent on a security clearance, can you be perceived as free to act robustly against those on whom your income depends? The Bar should refuse to accept the government’s plan to discriminate in favour of those barristers with an MI6 seal of approval.

Mr Clarke has form, although everyone seems to have forgotten it. Back in 1992, when he was Home Secretary, he was embroiled in the ‘Iraqgate’ scandal: he and several other ministers signed secrecy orders to cover up the fact that the Thatcher government had encouraged the illegal export of bomb-making equipment to Saddam Hussein. Three innocent men were put on trial and might well have been convicted and jailed had Michael Heseltine not had the integrity to blow the whistle. Mr Clarke had put government ‘sensitivities’ i.e. its fear of embarrassment – above the need for justice and above the public interest. That is precisely what he is doing by constructing these secret courts.

(c) Geoffrey Robertson QC. This is an extract from Justice Wide Open, a collection of working papers published in June 2012 as part of the ‘Open Justice in the Digital Era’ project at the Centre for Law, Justice and Journalism, City University London, http://bit.ly/openjustice.