September 5, 2012 by Will Fitzgibbon
Published in: Uncategorized
Tweet
Email this 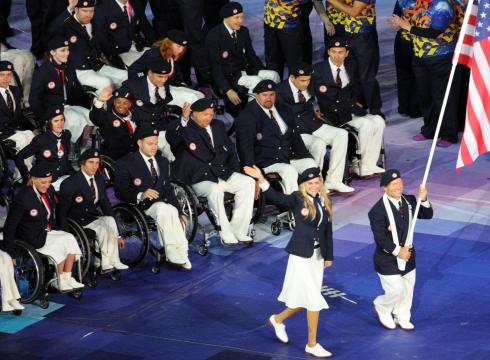 Why is the US Paralympic team not top of the medals table?

Those looking up the performance of the United States in the London 2012 Paralympic Games will have to scroll a little further down the current medal table than they would have done for the Olympic results.

Not far, but far enough to raise questions as to why the US is not doing as well as it did in the Olympics.

The US is currently sitting sixth, with 38 fewer gold medals than first place China and behind Great Britain, the Russian Federation, Australia and Ukraine. It topped the 2012 Olympic medal table.

History tells us that the US team’s fortunes may yet improve; the USA finished third in the 2008 Paralympics, fourth in 2004 and fifth in 2000.

But the Paralympic medal ranking of the USA is consistently and noticeably lower than its Olympic rankings. The USA has finished top of the medal table in four of the last five Olympic Games.  It gets American commentators writing headlines such as ‘Why is America So Awesome at the Olympics?’

It is clear that the same sentiments will not be shouted from Washington rooftops when the Paralympics ends on September 9.

This is in no way a criticism of the impressive performance of current US Paralympians. Multi-medal winning swimmers such as Justin Zook and Lantz Lamback have set new records and Team USA has appeared on the podium for swimming, rowing, judo, cycling, athletics and archery.

But the US’s lower medal haul in the Paralympics does raise wider questions on the equality of attention and funding given to disabled US athletes.

The United States is, of course, far from alone in failing to match its Olympic success in the Paralympic arena. South Korea, which came fifth in the overall Olympic medal tally, currently sits at 15th in the Paralympic equivalent. Italy is 12 places off pace and Hungary must jump 23 places to equal its Olympic position.

Questions may also be asked as to why India, the world’s most populous democracy and home to, with even the most conservative estimation, some 40m people with disabilities, has won only one medal.

But, cursed by its own Olympic success perhaps, the disparity in Team USA’s results across the two Games is much more noticeable than others.

A significant reason for the USA’s Olympic-Paralympic disparity comes down to funding and financial incentives for Paralympians.

This issue came dramatically to the fore in 2003 when three athletes took the USOC to court, alleging that the United States Olympic Committee underfunded American paralympic athletes.

‘Our group has been thrown crumbs by the USOC for decades,’ one of the complainants and a decorated Paralympian, Scot Hollonbeck, was quoted as saying at the time.

The Paralympians alleged that the USOC discriminated against Paralympians by providing smaller monetary prizes, lower personal allowances and fewer health care benefits to Paralympians than to their Olympic counterparts.

Ultimately, the USOC prevailed and various courts held that the Committee had the power to determine how to allocate its funding. In what was a victory nonetheless, the USOC increased funding to Paralympic sport during the course of the legal proceedings from $3m to $11.4 m.

Recent increases in the financial sponsorship of American Paralympic efforts by the US Department of Defense and Department of Veterans Affairs may see a stronger performance in the future. There are 20 members of the current US Paralympic team who are either veterans or currently serving soldiers and the Department of Defense is now one of the USOC’s largest Paralympic sponsors. This prima facie irony is hardly new; although a principal aim of the Games is ‘to promote peace,’ the Paralympic movement can trace its roots back to wounded British soldiers following World War II.

Across the United States today, Warrior Transition Units have helped to increased sports participation among former soldiers from 31% to 54%.

Beyond the dollars and cents, however, disabled Americans must also confront daily barriers to discrimination.

Gary Norman, attorney and civil rights campaigner based in Baltimore, believes that the US is one of the world leaders in disability rights. The challenge, Norman believes, is transforming a strong domestic legal framework into everyday protections and nation-wide respect for people with disabilities.

‘There is still way too much discrimination and attitudinal barriers around disability,’ says Norman.

On the international scene, the US is one of the few countries not to have ratified the United Nations Convention on the Rights of Persons with Disabilities. The Convention’s purpose is to ‘promote, protect and ensure the human rights, freedoms and dignity of people with disabilities’.

The powerful Committee on Foreign Relations recently supported the ratification of the Convention, reporting that ratification will improve America’s advocacy of the rights of disabled people in America and overseas. Advocates hope that bipartisan support with be forthcoming.

‘We need to be a world leader and lead by example,’ Norman told the Bureau. ‘And we can’t do that unless we ratify.’

A 2008 report by the National Council on Disability wrote that ‘a gap exists between US law’ and the Convention protections, particularly with regard to accessibility to cultural and recreation facilities.

The paralympic success of Great Britian and former Soviet bloc countries such as the Russian Federation and Ukraine may also point to the value of publicly-funded healthcare systems such as the NHS or higher level government participation in health and sport. In a recent report, PriceWaterhouseCoopers found that ‘sport is one area where state planning and intervention can produce results’.

Dick Traum, President of Archilles International, a non-profit organisation working in athletics for people with disabilities, believes that the US Paralympic medal standing reflects a lack of money and a lack of interest in disabled sports within the USA.

The United States was slow to engage in grass roots development of sports for people with disabilities, Traum says. As a consequence, it will be years before elite Paralympians will be in a position to threaten medal powerhouses China and Great Britain.

‘The Paralympics is virtually unknown,’ adds Traum, noting that television coverage is scant and claiming to have seen only one Paralympic-related article in the New York Times over recent days.

The International Paralympic Committee has expressed its disappointment in the American broadcast rights holder, NBC, which has chosen not broadcast the Paralympics live. NBC will this year broadcast five and a half hours of the action.

Traum blames both the lack of media coverage and the fact that ‘we in the US are not excited about how we come in sixth. People here are very competitive.’

Armed with that sense of competition, Traum predicts that the US Paralympic team will emerge as potential medal table -toppers in 2016 and 2020.