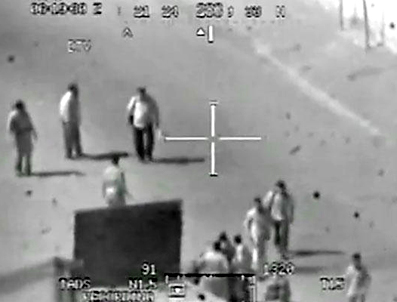 The calm before the storm: moments before call-sign Crazyhorse opened fire on unarmed civilians (Source: Wikileaks)

On July 12 2007 a US apache helicopter shot several Iraqi civilians in an incident that shocked the world when footage of the event was published by whistleblower website, Wikileaks.

The footage, taken from the helicopter, shows people fleeing for the safety of buildings being pursued, then the buildings they run to blown up. The attack resulted in 12 dead civilians, including a Reuters’ journalist and cameraman.

In ‘Permission to engage’, Al Jazeera tracks down families of the victims and a former US soldier to tell the story behind the Wikileaks ‘Collateral murder’ film.

But the footage leaked to Wikileaks is just one incident of several involving a unit relating to the call sign ‘Crazyhorse’. The particular incident filmed involved Crazyhorse 18. Through cables leaked to Wikileaks as part of its Iraq war logs cache of documents, the Al Jazeera documentary traces several other incidents involving the call sign. Many of these attacks also resulted in civilian deaths, or collateral damage as they are referred to by US army personnel.

Just 4 days after the death of the two Reuters’ journalists, in a neighbouring area of Baghdad, another incident occurred in which 14 civilians were fatally wounded in an operation involving two helicopter gunships responding to call signs ‘Crazyhorse 20’ and ‘Crazyhorse 21.’

In February 2007, two Iraqi insurgents were killed after attempting to surrender to a helicopter gunship. Soldiers aboard ‘Crazyhorse 18’ were given legal advice from a nearby military base: ‘Lawyer states they can not surrender to aircraft and are still valid targets’. The men fled to a nearby shack after Hellfire missiles were fired at their truck. The men were killed minutes later when the shack was destroyed by further missiles.

The pseudonym ‘Crazyhorse’ has its roots in US Army history.  An ‘operation crazyhorse’ took place in Vietnam in 1966, after North Vietnamese plans to ambush a US Army foot patrol were intercepted. About 250 US soldiers from two airborne battalions, defeated and killed 500 NVA soldiers in a fierce firefight.

The commander of one of these battalions, Captain Mozey, instructed his men to put ‘Death from above’ cards on every enemy they killed. ‘Death from above’ and ‘crazyhorse’ were both referred to and made famous by the reckless Lieutenant Colonel Bill Kilgore in ‘Apocalypse now.’The Al Jazeera documentary talks to people directly affected by the reckless, gung-ho nature of the helicopter pilots of the ‘crazyhorse’ battalion, to produce a moving and personal account of the footage.

Ethan McCord is a former US Army soldier who became disillusioned with the Iraq war after the events that took place on July 12 2007. McCord talks through the video, explaining that the presence of the Apache helicopter was justified due to problems they’d had with insurgents in that area.

The helicopter initially opens fire on a group of people and kills 8. McCord says this initial encouragement could be justified. ‘They’re still following the Geneva conventions here… we’re all trained [in] the loopholes of the Geneva conventions in the Army… we’re taught how to look after ourselves and how to engage individuals without getting into trouble.’The only survivor from the first round of machine gun fire was journalist Saeed Chmagh, who had a severe gunshot wound in his leg.

‘At first he was OK. He just kept on crawling towards a house in the Amin,’ Chmagh’s widow explains. ‘A van stopped to take him to the hospital. They saw he was injured.’

The driver of the van was on his way to his brother’s house with his children. ‘We saw a wounded man lying in the square, my father stopped to help him,’ the driver’s son explains in the documentary. ‘He got out of the car and the Americans opened fire.’ Both children were injured in this second attack, but survived; the driver, Saeed and another civilian were all killed.

In the second attack, which kills a further four people, the American soldiers seem to be killing rescuers. ‘This is where I start to have a problem,’ McCord concludes. ‘This is not following the rules of engagement, they’re embellishing information and it’s wrong; this constitutes a war crime.’

Ground patrols turn up at the scene; McCord is among them. He is highlighted in the footage picking the son of the driver out of the car and carrying him to his armoured vehicle.

‘A major turning point was when I pulled those kids out of the van,’ McCord explains. ‘I stopped firing my weapon, I stopped beating people needlessly. It was that point that I really realised what we were doing is wrong.’ Ethan McCord found it hard to cope with what he had seen and done in Iraq, but things didn’t get any better after finally coming home. ‘The guilt and the anger and everything, and you know I got hospitalised, I tried to commit suicide when I got home.’

‘With such pain, friendship may be too much to ask, but please accept our apology, our sorrow, our care and our dedication to change,’ write McCord and fellow ex-US soldier Josh Stever, in a letter to widow of the driver that was killed by the ‘crazyhorse’ gunship.

‘I accept his apology but what good is it to me?’ asks the widow. ‘He can’t bring back to me what I lost. What is the point?’

Read the Bureau’s work on Wikileaks Iraq material at iraqwarlogs.com

A report in the Mail on Sunday reveals potential war crimes and torture by British troops.

Iraqi families tell of the struggle to find their loved ones.

The leaked US war logs contain details of thousands more civilian deaths in Iraq, according to estimates by Iraq Body Count