May 29, 2012 by Will Fitzgibbon
Published in: Uncategorized
Tweet
Email this 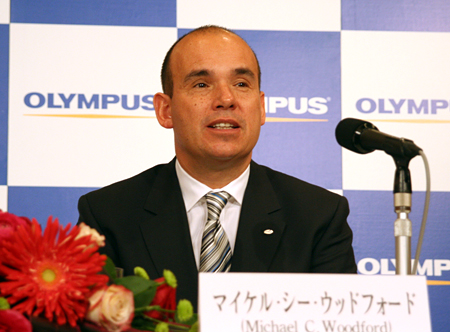 Woodford is now a very rich man, but future UK whistleblowers have nothing to follow.

Michael Woodford, who was sacked as chief executive of Japanese camera giant Olympus after making enquiries that led to the revelation of massive accounting fraud within the company, has settled his claim for unfair dismissal in a London court today.

Reports had indicated that Woodford would be seeking up to £38m in compensation from Olympus, in a case that had drawn significant media and business attention.

The case is unusual given the high profile of the Olympus scandal and the size of Woodford’s expected settlement.

Woodford worked for the Tokyo-based company for 30 years. In 2011, after only two weeks in the role of chief executive, the Olympus board asked him to resign after he queried and then pursued enquires that later exposed a $1.7bn (£1.1bn) fraud scandal within Olympus.

The company originally claimed Woodford’s dismissal was due to clashing management styles.

For Gregory Brandman, partner at Evershed Lawyers, the case that began in an East London employment tribunal on May 28 was ‘probably the most significant example of a senior executive blowing the whistle on his own company’.

Under the British law governing whistleblowing, the Public Interest Disclosure Act (PIDA) 1998, compensation and employment protection is conditionally available to ‘individuals who make certain disclosures of information in the public interest’.

Commentators expressed surprise that the dispute reached the courts.

‘Most employers like to avoid embarrassment,’ said Professor David Lewis, an employment law specialist and the International Whistleblowing Research network.

Yesterday, the start of proceedings was interrupted by a series of postponements. Lawyers from both sides were said to have worked late into the night to reach a settlement estimated at around £10m.

Without a settlement, the extraterritorial scope of PIDA would have been determined with potentially important repercussions. Woodford’s case would have first had to determine the application of Britain’s whistleblowing legislation, the Public Interest Disclosure Act (1998), for employment contracts made overseas, in this case in Japan.

For advocates of extended whistleblower protection, the settlement is a mixed blessing.

‘It’s great that Michael has got such a good settlement,’ said Shonali Routray, legal director of British whistleblowing charity Public Concern at Work. ‘It’s one of the few instances where, I suppose, people know about it.’

For Routray, however, the issue highlights the lack of transparency in the cases of the majority of whistleblowers who do not benefit from Woodford’s high profile and newly gained millions.

Most employment disputes arising under PIDA are closed to the public, in accordance with rules of employment tribunals.

This ‘shroud of secrecy’ must change if businesses are to change their behaviour and if employees are to be given equality of arms in litigation with powerful corporate entities, said Routray.

‘We know about the high-profile cases,’ said Routray. ‘What we want to know about are the smaller cases. What about the care worker that discloses information about the abuse of patients? That shouldn’t be shrouded in secrecy.’

‘People use PIDA because they are desperate,’ said Lewis. He argues that settlements may be seen as a victory for businesses, which may as a result keep private information of public interest.

Read the Bureau’s work on NHS doctors being gagged after they have blown the whistle here.