May 14, 2012 by Emma Slater
Published in: Uncategorized
Tweet
Email this 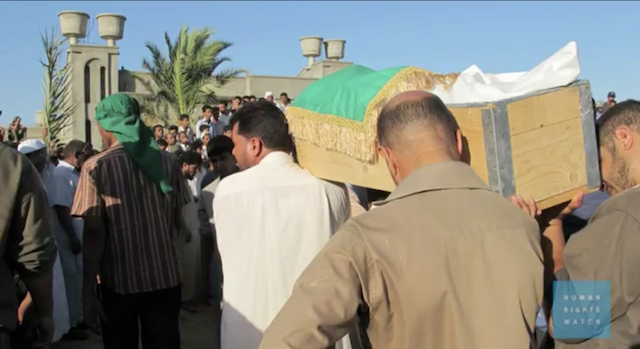 On August 8, 2011, Muammar lost his wife, sister, and eight-month old daughter Salma. They were killed by a NATO airstrike on their house in Majer, a rural village in the district of Misrata.

But Muammar’s family were not the sole civilian victims of NATO’s aerial campaign in Libya, a report by NGO Human Rights Watch revealed today. In total, 72 civilians were killed, many of them children.

The report, a 76-page study, is based on investigations of bombing sites during, and after the conflict. HRW surveyed eight sites across western Libya where air assaults took place. ‘Our job is to monitor the violations no matter who is committing them,’ explained HRW special adviser Fred Abrahams.

While NATO maintains that the sites were all ‘legitimate military targets’, HRW researchers found that in seven of the eight sites, there was ‘no clear military target’, and scant evidence that ‘Libyan military forces, weapons, hardware, or communications equipment’ were present at the time of the attack.

In a thorough, measured report, HRW explained that NATO had taken steps to minimise the possibility of civilian casualties, through ‘the choice of targets, the choice of weapons, the timing of the attacks’. However, where NATO fell short, said the NGO, was in its denial that civilian casualties occurred. NATO ‘refused to give any information about how they died, and they refused to investigate’, claims special adviser Fred Abrahams.

‘It’s this lack of transparency that is deeply troubling’, he said.

This lack of transparency is particularly stark regarding the attack that killed Muammar’s wife, daughter and sister. Around lunchtime on August 8, 2011, NATO bombs targeted two houses owned by his family, killing the three women.

Then, 10 minutes later, as relatives and friends came rushing to help, another bomb struck just outside Muammar’s compound. It killed 18 men and wounded 15 others.

NATO told Human Rights Watch that the homes were legitimate military targets, and there was ‘clear intelligence that the former farm buildings were being used as a staging point for pro-Gaddafi forces to conduct attacks against the people of Libya’.

But what is particularly useful about the HRW investigation is that researchers on the ground were able to visit the sites of bombing immediately after reports of civilian casualties surfaced, thus able to uncover who died, and how. They found that NATO may well have been wrong.

Visiting Majer the day after the attack, researchers found ‘no evidence of military activity at either of the compounds, such as weapons, ammunition, or communications equipment that would have suggested a military target.’ Rather, there was evidence that the houses had been filled with civilians.

‘When I got to Majer the day after the attack, both of the homes were still smouldering. Relatives were distraught and in shock. NATO targeted three compounds clustered near to each other. In one of those compounds, NATO hit the house that was full of displaced persons from around the conflict – people who had fled areas of fighting to take refuge in this house,’ Abrahams said.

What is particularly worrying, claims the NGO, is that NATO were likely to have used highly precise ammunition to target the houses. The laser-guided GBU-12 allows the user to observe their target clearly, explained Abrahams. So why the second strike on the rescuers?

‘The shooter would have in all likelihood seen that people were digging through the rubble. So it raises very serious questions about whether this was a legitimate target – maybe it was an unlawful target, meaning a violation of the laws of war,’ Abrahams said.

In a thorough method detailing every strike, HRW have highlighted NATO’s failure to investigate civilian deaths, no matter how ‘low’ the numbers. A similar method has been used by the Bureau in our own calculations of numbers of civilian deaths as a result of US airstrikes in Pakistan, Yemen and Somalia.

As with the Bureau’s investigations, Human Rights Watch aims to increase transparency, and provide justice and answers for the families of those killed, and to help them attain compensation – in this case from NATO.

Secondly, the NGO wants to change the nature of future campaigns, so that civilians casualties are reduced.

‘If you don’t examine what went wrong, why a civilian died, then you won’t learn from your mistakes. And civilians are more likely to die in the future,’ Abrahams warned.