April 23, 2012 by Emma Slater
Published in: Uncategorized
Tweet
Email this 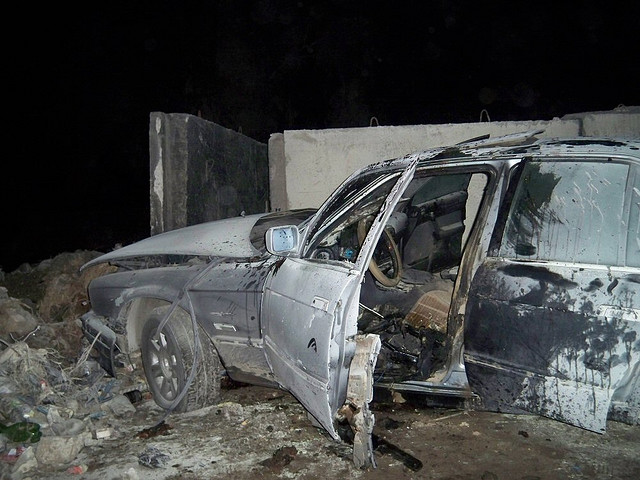 The car of Capt. Nabil Hussein Ali, killed by a ‘sticky bomb’ under his vehicle, Baghdad, Dec 2008.

‘Death usually comes to people, but we go to Death.’

So began the second episode of Unreported World, on Channel 4 – a series shaping up to be a vital strand in investigative reporting.

The first took place in the shattered lands of southern Sudan, where President Bashir is waging a bloody war against alleged militants, and thousands of villagers. The next episode moved to an equally tense and dangerous location, but one which has featured more heavily, perhaps, in the minds of western politicians.

Baghdad, Iraq.  In December 2011, American troops withdrew from the country, as President Obama declared the nine-year war in Iraq over. ‘Iraq is not a perfect place. It has many challenges ahead. But we’re leaving behind a sovereign, stable and self-reliant Iraq, with a representative government that was elected by its people,’ Obama told US troops.

While the destruction of Saddam Hussein’s regime and the formation of a unified, if fragile, power-sharing government did provide a glimmer of hope for many Iraqis, Friday’s Unreported World shows how ‘Iraq still faces almost daily attacks from those trying to foment political chaos and sectarian hatred.’

Reporter Krishnan Guru-Murthy and director Alex Nott gained unprecedented access to one of Iraq’s key teams in its war on terror – the Baghdad bomb squad. Every day, a team of 12 courageous explosives experts are on call to diffuse planted devices, or, when it’s too late, to investigate the bombs that cause devastation around the city. It is a frantic, demanding, and often life-threatening job. Over the past two years, Unreported World learns, over 30 members of bomb disposal teams have been killed across Iraq.

Ali Latif, of the Iraqi Police Explosive Ordnance Disposal unit (EOD), was one victim. His work partner, Ali Hameed, explained that he had been ‘living with severe psychological stress’ since the incident that killed his friend.

‘It was a car bomb,’ he told Guru-Murthy. ‘We sent in a robot to check out the vehicle, but we didn’t find anything. We decided to deal with it manually and this was the mistake. When we entered the car we were surprised to see the explosives. They were obvious and then we heard the phone ring…After the phone rang, he was blown to pieces.’

Another former officer, Mohammed Jabbar, was targeted in April 2011 by an improvised explosive device planted near to the bomb squad’s base. Miraculously, Jabbar survived, but his leg and arm were blown off in the attack. He was provided with a prosthetic leg, but it is rudimentary, heavy and uncomfortable, and must now support his three children and elderly mother on a meagre police pension. He regrets ever joining the force, he says.

Yet each day, the rest of the team carries on, clinging to the hope of a better future. Rawad Yassin, a 29-year old officer, wants to make the city safer for his family, particularly his young daughter. ‘I want her to live a life without bombs and violence’, he says. But with bombings increasing, it’s, sadly, difficult to imagine this happening.

During the first half of the programme, Guru-Murthy and Nott travel with the bomb squad, encountering attacks around the city. During the morning that they accompanied the team, there were four explosions – in two, senior Iraqi officials were targeted. While both officials escaped, and one of the bombs were successfully diffused, 55 people were killed that day. The squad believes that Sunni extremist group Al Qaeda was behind the sophisticated and coordinated attacks. With tensions between Shia and Sunni Muslims escalating, many believe that the situation will get worse, not better.

In a slightly unnatural segway, the Unreported World team then leaves the bomb squad, and the second part of the programme sets out to explore how, because most of the bombings target Shia groups, and are thought to be carried out by Sunni extremists al Qaeda, many Sunni leaders feel unjustly blamed for the violence.

This segment seems rather tacked on to the end of what is otherwise a strong piece. However, it does reveal a worrying truth – powerful Sunni leaders are feeling marginalised, and the sectarian divide between the two groups is deepening.

‘We are heading towards confrontation. It’s only a matter of time,’ Sheik Ali Al Hatam, one of the most powerful Sunni tribal leaders, warns Guru-Murthy.