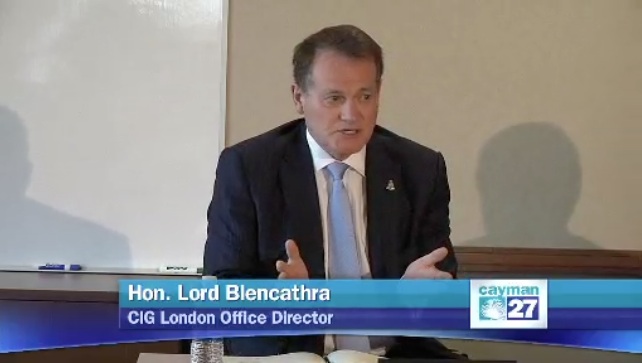 I’ve been appointed because I have 27 years experience as a Member of Parliament, ten to twelve years experience in a British Government. I’m still a Parliamentarian in a different colour of the corridor in Westminster.
Lord Blencathra

The following extracts are taken from the transcript of a question-and-answer session during a press conference in the Cayman Islands on 5 April 2012 with Lord Blencathra and MPs Graham Brady and Brian Donohoe, who are respectively chairman and vice-chairman of the All Party Parliamentary Group (APPG) for the Cayman Islands.

Q: I would like to ask Lord Blencathra – can you tell us a little bit about your job?

Lord Blencathra: In the past, before the financial crisis struck, I think the role of the London office could, of necessity, be slightly different. It did consular service, did work with the APPG. But because the financial crisis has put all banks, the whole financial sector into the spotlight as never before, they have to justify their existence, the City of England [sic] has to justify its existence to what is largely a hostile media, sometimes hostile regulatory authorities.

Cayman, the financial industry here has to justify its existence, which it didn’t really have to do before in political circles. I’ve been appointed because I have 27 years experience as a Member of Parliament, ten to twelve years experience in a British Government. I’m still a Parliamentarian in a different colour of the corridor in Westminster.

Related article: Analysis – Lawmakers should not be lobbyists

And the Government feels that because of the knowledge I have of how Whitehall works, Westminster works, that I can be a good representative to feed in to the correct authorities in the Government the views of the Cayman Islands and help defend our interests.

You may say, what do I know about Cayman?  A lot more than I did a couple of weeks ago. I don’t pretend to be an expert on Cayman but I’ve not been employed to do that job – there are hundreds of experts here who can advise me. My role is to make sure I can feed that advice in to Government ministers, to the Civil Service, the Governor does it as his level, I do it at mine on behalf of the Cayman Islands Government.

Q: Lord Blencathra who pays your salary is it the Cayman Government or the UK government for your work in the London office? 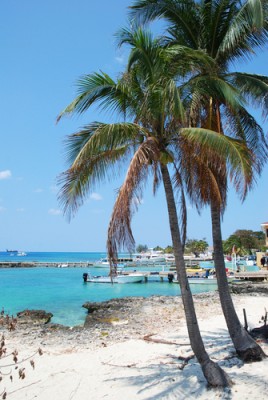 Q: You mentioned some issues that may come up in European legislation, can you brief us on that.

Lord Blencathra:  It’s everything you read about it in the financial press.  For example the detailed regulations coming out now on the Directive on AIFMD 2, on fund management, could, if interpreted strictly, limit severely the ability of the financial centres such as Cayman and other Overseas Territories to compete and to sell the product in Brussels. If the Financial Transaction Tax were to go ahead that could be beneficial to Cayman if it closed down the City of London.

Q: You mentioned the financial transaction tax just for example, you mentioned that it could be helpful if it closed down the City of London. There’s been a lot of commentary on the new relationship between the UK Overseas Territories and the UK, that we are actually competing jurisdictions now. How do you all view that, how do you look at that.

Lord Blencathra: Let me clarify my earlier remarks in case an off-hand remark is misconstrued. A financial transaction tax, if imposed only in Europe, would be damaging to the City of London, it would be very damaging. That business would go elsewhere. It could go to Singapore, it could go to Europe and some would say it could come to Cayman – it certainly could do. But then Cayman would have a problem of 50,000 people from London wanting to move to Cayman and that would cause other difficult problems so the best solution is not to have a financial transaction tax, let Cayman expand its financial services and let London expand and work in synergy.

I work for the Cayman Islands government in London not for the UK Government in Cayman: Very clear about that.
Lord Blencathra

Cayman along with the BVI, and the Jerseys and the Guernseys of this world and Bermuda are international financial centres and are becoming international business centres.

If China deals with London for the Renminbi, London will be, quote, an offshore financial centre so it just shows how nonsensical that derogatory terminology is.

The synergies between London and Cayman are very strong, the financial flows are strong. I wish we could, and I’m sure all my colleagues would say the same thing, I wish we could identify, that there are guys who are working in a Jaguar factory in Birmingham in England, working for Mr Tata, for an Indian company, and the money that is going to them has come from the City of London, which has come from Cayman which has flowed in from funds in the States and all around.

We know that happens but you just can’t prove it and as politicians we’d all like a nice little soundbite, just to show how important Cayman is in helping the United Kingdom and the United Kingdom is in doing business with Cayman. We know it happens but if you can find as a journalist a simple way of proving it you’ll make a fortune. Politicians will queue at your door to get that soundbite.

A film of other parts of the press conference can be viewed on Cayman 27’s website.