April 16, 2012 by Emma Slater
Published in: Uncategorized
Tweet
Email this 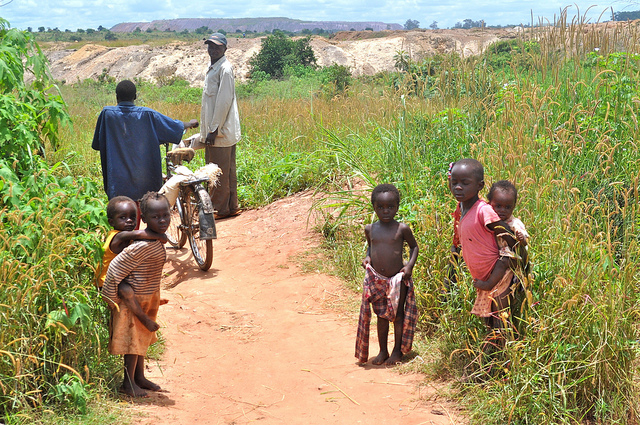 Katanga, Democratic Republic of the Congo. A copper mine is in the distance.

Glencore ‘has a long way to go before earning the title of a responsible company,’ begins a new report by NGOs Bread for All and Fastenopfer. Its investigation, featured in a BBC Panorama documentary tonight, accuses the commodity and mining titan of buying copper mined by children in the Democratic Republic of the Congo.

The report also accuses Glencore of dumping ‘pure acid’ into a river on another site in the country, causing extensive pollution. And it further claims that Glencore, through a subsidiary, may have been indirectly responsible for violence at a DRC mine, which resulted in the deaths of three workers.

With operations in 40 countries around the world, Glencore had a turnover of $186 billion in 2011. Its CEO, Ivan Glasenberg, owns 15.8% of company shares, amounting to $7 billion. The company is pursuing a merger with mining giant Xstrata, of which Glencore already owns 34%. The planned merger, currently seeking regulatory approval from the European Commission, is set to create the world’s fifth largest mining operation.

But 4000 miles from Glencore’s austere head office in Zug, Switzerland, hundreds of children descend down a 150 ft shaft leading to an unsafe and unsanitary copper mine, alleges the new report. Paid an average of $6 a day, the miners are at constant risk of landslides, and disease spreads quickly in the cramped, dirty conditions. Workers rarely have a harness, protective clothing, or even a helmet. If an accident occurs, miners receive no compensation. ‘There is no measure of health and sanitation, no water, no toilet,’ a worker at the mine told the NGOs’ researchers. ‘When they need the toilet, everyone goes into the bush, and when thirsty, miners drink water unfit to drink.’

‘We definitely do not profit from child labour in any part of the world. This is adhered to strictly. We are pleading with the government [of the DRC] to remove the artisanal miners from our concession.’

A statement released by Glencore ahead of Panorama adds that the group would ‘be very concerned’ if copper ore sent from Tilwezembe made its way to Glencore’s smelting plant in Zambia. Saying it has ‘no involvement’ in the mining activity, the company states it is ‘in dialogue with the Government on how best to handle the situation at Tilwezembe and [has] asked the authorities for help to remove these artisanal miners.’

However, Bread for All and Fastenhopfer allege that, through a chain of subsidiaries, Glencore is connected to the mine, explaining that Glencore owns 75% of DRC company Katanga Mining Limited. Katanga Mining operates two joint ventures, Kamoto Copper Company (KCC) and DRC Copper and Cobalt Project (DCP). KCC has three active mines, and three inactive mines, of which Tilwezembe is allegedly one. Tilwezembe was declared ‘dormant’ in 2008, and KCC ceased mining there.

But Bread for All and Fastenopfer claim that the mine is still being worked by artisanal miners, including nearly 700 children and teenagers who extract copper and cobalt which they then sell to Lebanese company Misa Mining.

Misa sells the minerals to another Lebanese company – Bazano Group, which, alleges Bread for All, sells them on in turn to a number of companies, including Mopani Zambia, a Glencore subsidiary.

‘Panorama tracked a lorry laden with copper from Tilwezembe for 27 hours to a plant run by a major Glencore partner in Congo, Groupe Bazano. Copper from the Bazano plant has then been sent to Glencore’s smelter in Zambia, according to documents obtained by the programme.’

The programme found that last year, 60 miners died at Tilwezembe, making it one of the world’s most dangerous mines.

Workers clash with police
The Bread For All/Fastenopfer report also alleges that Glencore subsidiary KCC may have been indirectly involved in clashes between miners and DRC police two years ago, in which three mine workers died. It states that on June 21, 2010, a mine in Luilu owned by DRC state mining company Gécamines was forcibily closed, and all workers evicted.

The mine sits next to a site owned by KCC. Bread for All and Fastenopfer claim that over a number of hours, violence between police and the miners intensified, throughout which time KCC, Glencore’s subsidiary, was claimed to have provided private security forces and equipment.

‘The situation was serious at the Kilamazembe quarry because the miners were worked up seeing that Gécamines, KCC and military from the rear base were beating up and arresting everybody while people’s very survival depended on this operation’, a lawyer who defended the civil party told researchers.

Witnesses said that the mine workers threw stones at the police, and ‘the police responded…by firing real bullets.’ As a result, three mine workers died: Jacques Mulunda, 22; Andre Mwiland, 17, and a young girl called Nathalie. Many people were also injured in the violence.

But again, Glencore refuted claims that KCC was involved, saying: ‘This incident was related to a Gécamines concession and not a KCC concession. KCC did not order the evacuation. The evacuation was undertaken by Gécamines security. As a result of the above, KCC did not conduct an inquiry.’

Water pollution
Tonight’s Panorama also features allegations that Glencore is damaging the environment. Researchers from Bread for All and Fastenopfer found that the Luilu metallurgical plant, operated by Glencore subsidiary Kamoto Copper Company (KCC) is causing massive water pollution. Laboratory analysis conducted by the NGOs reveals that the water in the river has a highly acidic pH – 1.9, signifying that the plant is pumping pure acid into the river, rendering the water not only unsafe to drink, but unusable for washing and irrigation.

Panorama reporter Sweeney, who went to the site, stated: ‘Glencore’s acid waterfall stank of toxic fumes when I visited it a few weeks ago. Upstream, the river used by local people to wash and fish was clear; downstream of the Glencore pipe, there was brown sludge. One local complained: “Fish can’t survive the acid. Glencore lacks any respect for people. No one would do that to another human being. It’s shocking.”‘

A professor at the University of Lubumbahsi told NGO researchers that acid in the river risks causing the extinction of all flora and fauna. The levels of lead, cobalt, copper, nickel and zinc are also well above the threshold allowed in the Democratic Republic of Congo, he said. Glencore maintains that the problem occurred as a result of irresponsible mining techniques by its predecessor, Gécamines, and the company is working to alleviate it. However, the NGOs say their research shows that in the years that Glencore, through KCC, has operated the factory, the pollution has continued.

The Bread for All/Fastenopfer report also alleges that KCC has ‘prioritised building new infrastructure for their mine’ in Musonoi, Katanga, over providing a water source for Musonoi’s inhabitants. There were originally two water pumps for the villagers, but KCC removed one to make way for new infrastructure, and the other has broken. There is now no water source during the day. Glencore states that KCC will build new water tanks, but this has not yet happened.

Billionaires Behaving Badly? Panorama, is on BBC1, 16 April, 8.30pm. For the full report by Bread For All and Fastenopfer, click here.