April 13, 2012 by Emma Slater
Published in: Uncategorized
Tweet
Email this 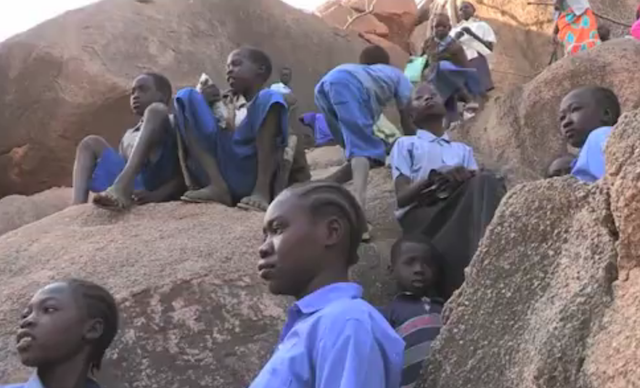 Tonight’s Unreported World, the first of a new series, gives a horrifying insight into the atrocities committed against the people of Sudan by their government. President Omar al-Bashir, wanted by the International Criminal Court for war crimes in Darfur, is waging an unrelenting genocidal campaign against civilians in the south of the country, killing thousands in airstrikes, and thousands more by refusing to allow international supplies – aid, medicine, and food – into the area.

‘When the plane comes we make them run to the caves to save their lives,’ the children’s headteacher explains.

In July 2011, following a 20-year civil war, Bashir’s country split, and the Republic of South Sudan was formed. Bashir, intent on imposing Islamic law throughout Sudan, began a war to destroy the ‘Christian sympathisers’ of the South. ‘There will be no time to speak of diversity of culture and ethnicity’, Bashir declared. ‘Islam [will be] the official religion and Arabic the official language.’

Allegedly targeting opposition supporters, he vowed, ‘we will force them back into the mountains and starve them.’ But when Channel 4 reporter Aidan Hartley and director Daniel Bogado travelled to the Nuba mountains, the region blighted by government airstrikes, they found that civilians, rather than guerrilla groups, are frequently the focus of the onslaught.

Only minutes into the documentary, Hartley, Bogado and their rebel escorts spot Antonov bombers circling overhead. The production crew dive to the ground; the rebels, members of the Sudan People’s Liberation Army, fire at the sky. This time, they’re lucky. The planes fly on to another target.

‘There will be no time to speak of diversity of culture and ethnicity. Islam [will be] the official religion and Arabic the official language.’
Omar al-Bashir, President of Sudan

But they show that hundreds of men, women and children are not so fortunate. Dr Tom Catena, an American missionary and the only surgeon at the Mother of Mercy hospital – the single medical facility in Nuba, claims that 80% of the strike victims he treats are civilians. The hospital has 80 beds. When Unreported World visited, there were 500 patients.

Daniel, 14, had to have both his arms amputated following an Antonov bombing. His uncle told the team:

‘Daniel went out with the cattle. The Antonov came and dropped a bomb on him. He tried to lay down…but before he could get down properly, the bomb exploded and shrapnel cut off both his arms.’

Then there is 11-year-old Sabir. Bomb shrapnel ripped off his nose and half his face, leaving him permanently disfigured. And in the women’s ward, teenage mother Alawiya tells Hartley how a strike that blew off her arms also claimed her mother, sisters and baby.

Mother of Mercy hospital – the single medical facility in Nuba – has 80 beds. When Unreported World visited, there were 500 patients.

Meanwhile, in the Nuba mountains, children climb down from caves littering the hillside. An estimated 350,000 civilians have fled their homes due to the violence: many now live in the cracks between sandy boulders. Eating leaves, wild berries, and – if they are able – a handful of contaminated grain, the families barely survive. But they are determined to try.

Hand-in-hand, the children walk to a school set up by the families of the caves. Hundreds of them stand in a circle, singing together, trying to retain a semblance of normality. Then, a government warplane flies overhead, and the children scatter into the folds of the mountain.

‘When the plane comes we make them run to the caves to save their lives,’ the children’s headteacher explains.

Tonight’s Unreported World is a brave and invaluable documentary that gives an insight into one of the most pressing human rights issues of our generation. It calls for urgent international action to prevent government airstrikes and Bashir’s ‘politically generated famine’. It’s a cause that has hit the headlines, most recently when Hollywood actor and activist George Clooney was arrested outside the Sudanese Embassy in Washington DC, after campaigning to stop the ‘man-made tragedy’ unfolding in the Nuba region.

‘Best estimate is tens of thousands of people are going to die from starvation… this isn’t a famine, this is a man-made tragedy by the government of Khartoum to get these people to leave,’ Clooney said following his release. Clooney caused a stir in the international community – let’s hope this powerful documentary forces the world’s superpowers to sit up and listen.