March 19, 2012 by Chris Woods
Published in:
Tweet
Email this 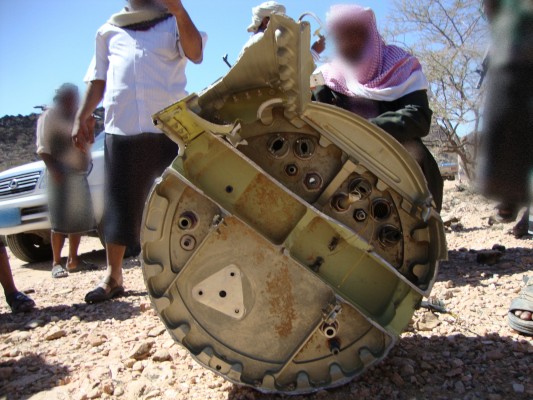 Part of bulkhead of BGM-109D Tomahawk cruise missile, showing NATO-style electrical and data connectors, carrying BLU-97 cluster munitions, apparently taken some days following 17 December 2009 attack on an alleged al-Qa’ida site in al-Ma’jalah, Abyan governorate, Yemen.
According to a fact-finding committee of Yemen’s parliament, the attack killed 55 people including 41 named civilians (14 women and 21 children), and 14 alleged members of al-Qa’ida, although local authorities were only able to provide the name of one of these 14 suspects.

Photograph obtained from private source in Yemen by Amnesty International, March 2010. The identities of the people around the missile have been concealed for their safety.

Responses to this story