March 9, 2012 by Emma Slater
Published in: Uncategorized
Tweet
Email this 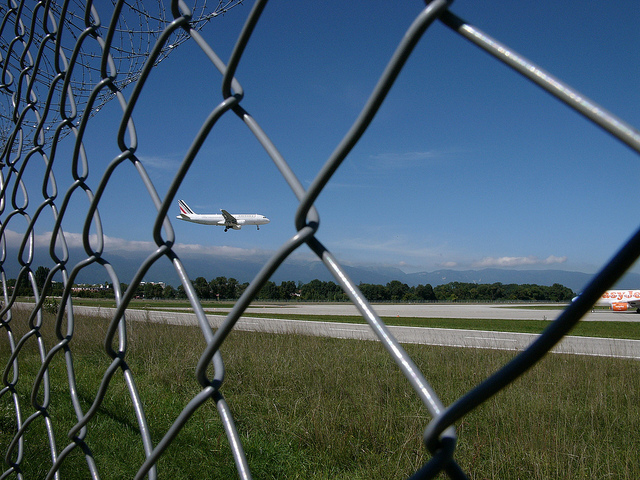 The Frambois detention centre, in Vernier, Switzerland, is a world away from the picture-postcard images normally associated with the country. Soaring Alpine peaks, shimmering lakes, and neat chalets with bright flowers adorning painted wooden window boxes – all have no place here.

Eventually, its two dozen detainees will be sent back to their country of origin. Until then, their views: razor wire, grey concrete walls and thin corridors, are in stark contrast to the chocolate-box ideal. A scowling cartoon vulture stands atop the road sign indicating the centre’s entrance, reminiscent of a warped theme park, or run-down motel.

For the rejected asylum seekers and illegal migrants featured in Fernard Melgar’s film, Special Flight, to be shown as part of the Human Rights Watch Film Festival, deportation could come tomorrow, or in a year. As such, there is an undercurrent of tension, of melancholy apprehension pervading throughout the piece.

The centre’s staff do their utmost to maintain calm, to ensure that the men have ‘a pleasant stay’. They endeavor to use the word ‘residents’ rather than ‘inmates’. The men are well fed, and entertained with exercise and woodwork. Some have stereos in their rooms, like Wandifa, ‘the rapper’, who entertains staff and residents alike with his poignant lyrics and catchy tunes.

But in reality, it’s a low-security prison. The film reveals how the rooms – or cells – are locked each night at nine. Visits are permitted, but only for an hour. And when the men refuse to be deported, they are taken away in handcuffs, and placed on a ‘special flight’ to their country of origin.

Yet filmmaker Fernard Melgar shows how the residents are people, just like anyone else. Many have families in Switzerland – some have been living in the country for over 20 years. Melgar captures one resident writing a heartfelt letter to his son, ‘I will love you all my life,’ he writes. ‘I’m your daddy. You will always be in my heart. Please don’t be sad.’

The resident explains how the country in which he was born ceased to be his home long ago.

Special Flight is a fascinating, moving portrayal of daily life for a community of men who ‘share friendships, fears and a similar fate.’ Although a little slow at times, it is an intimate and emotionally complex film. Melgar had excellent access, documenting the entire process of arrival, through to departure from the centre. There are elements of hope – one resident, Pitchou, is granted asylum and leaves a free man. But there are also deeply sad, and sometimes shocking elements.

‘Mentally speaking it’s very hard to be here,’ one resident says. ‘They tell us to go home, but we don’t want to go home. we’re oppressed back home…why are people who are not criminals deprived of their freedom?’

It hurts to be locked up like animals. We get overfed, but we’re deprived of our freedom.’

Towards the end of the film, two residents are forced to leave. Melgar cuts to a news report – the first departure from the images of the detention centre. The broadcast reports that a 28-year-old Nigerian asylum seeker had died on the way to the airport. The suspicion was that heavy restraint had caused, or contributed to his death. The two men from Frambois return. They witnessed the man die, and were shocked and appalled at the treatment they received. Even the manager of the centre, Jean-Michel Claude, seems shaken and pledges to press for an inquiry.

But the residents are despondent. ‘If it had been a Swiss citizen that died yesterday, all hell would break loose. But because it was an African, nothing much is happening.’

It seems they are right. In the film’s final scene, another ‘special flight’ deportation begins, as if nothing had happened. The juxtaposition is startling, and is a real reminder that while the staff treat detainees as friends, the job comes first.

‘Special Flight’ will be shown as part of the Human Rights Watch Film Festival 2012. London screenings will take place on the 27th and 28th March. For more information, and other screenings around the world, click here.