February 7, 2012 by Dan Bell
Published in: Uncategorized
Tweet
Email this 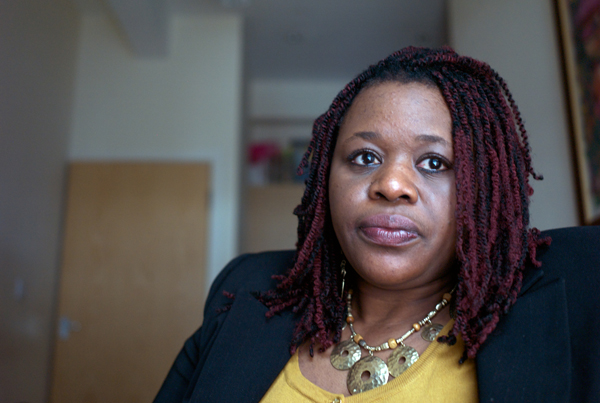 Janet Alder recalls the loss of her brother.

The grainy CCTV footage of the custody suite has a sickly blue-green tinge. On the top left hand corner is a digital time counter, marking the footage with the passing seconds and minutes. At first, from its fixed vantage point above the in-take desk, the camera shows a quiet night passing slowly, with officers walking in and out of frame, chatting with each other, cracking jokes, whistling absent mindedly.

Then suddenly two officers push through the red door into the custody suite, they are bent over from the waist, dragging a dark object with them at floor level. There is a snoring, grunting noise, then one of the officers says ‘steady now’ as they rest Christopher Alder’s unconscious body face down on the floor, still handcuffed behind his back.

The officers continue to ignore him [Christopher], raising their voices to be heard above the sound of the dying man behind them.

Caught on camera
The footage, from an April evening in 1998, is of the last moments of Mr Alder’s life. Following a fight outside a club in Hull, he was taken to hospital then arrested for breach of the peace and dragged into Queens Gardens police station. Ten minutes later he was dead. All the officers involved were subsequently cleared of manslaughter and misconduct charges.

Having put Christopher on the floor, the two officers straighten up, one leaning back and resting his elbow on the desk, the knuckles of his other hand on his hip. The other officer leans against the opposite wall, his weight resting on an outstretched arm, palm flat against the wall. They both look down at Christopher like two builders taking a rest after carrying an awkward load, sizing up what to do with it next.

After his arrest Christopher Alder was taken to a police station. There, he was left lying on the ground facedown, with his hands cuffed behind his back.

During the course of more than 10 minutes, the CCTV footage shows police officers did little to help Mr. Alder, despite the loud spluttering noises he was making.

All the officers involved were subsequently cleared of manslaughter and misconduct charges.

Two more officers come and join them, looking down at the motionless body on the floor. The muffled footage picks up an officer saying: ‘He’s acting now’ and ‘this is a show this’. The four officers talk among themselves, two walk back behind the desk, another turns to face them, resting on both elbows. Occasionally one of the officers turns to glance at the body lying prone behind him. From time to time their bored conversation is punctuated by a sound of snorting and gasping.

As the seconds and minutes tick by in the corner of the screen, the intermittent snoring grunts get louder and more ugly and gutteral. The noise of Mr Alder’s final gasps are very loud and even on the muffled CCTV footage they have the horrifying quality that instinctively tells you something is terribly wrong. The officers continue to ignore him, raising their voices to be heard above the sound of the dying man behind them. As the wet, nasal gasping gets louder, one officer looks back briefly, indicating toward him with an offhand gesture, then looks back at his colleagues as his sentence is cut off by the next gasp. The noise is what can best be described as a death rattle.

‘It can come to mind so easily because it’s barbaric isn’t it? It’s barbaric to treat another human being like that. I don’t think it’s something that will ever, ever leave me to tell you the truth.’
Janet Alder

Eventually, some ten minutes after he was left face down on the floor, one of the officers appears to notice that something is wrong. He puts on a pair of rubber gloves, kneels by Christopher to feel the pulse in his neck; the mood suddenly changes. They fall quiet for a moment as the other three officers come round to look down at his body. One says quietly: ‘Do you want an ambulance?’ ‘Yeah, get an ambulance now.’ As the officers finally pull Mr Alder onto his side into the recovery position, the footage shows his trousers and pants have been pulled down and he has been lying on the custody suite floor half naked.

Ten years on
Some ten years after she first saw it, the CCTV footage of her brother’s death still gives Janet Alder flashbacks. ‘It can come to mind so easily because it’s barbaric isn’t it? It’s barbaric to treat another human being like that. I don’t think it’s something that will ever, ever leave me to tell you the truth.

‘Oh god. You just think about what they’ve been through to get into that state. Handcuffed behind their back, not able to even defend yourself and fightback and truncheons and CS gas and not being able to breath and kickings between the legs. And all those things come to mind.’ 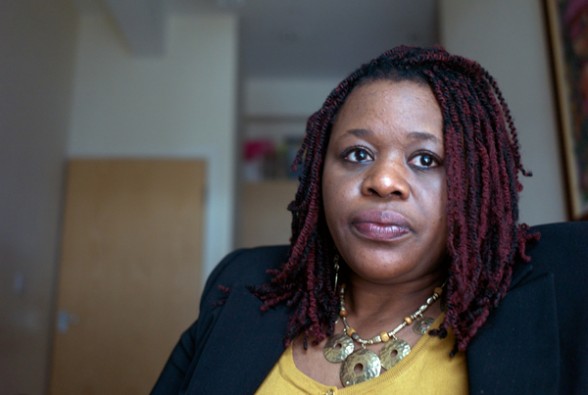 Janet Alder has been scarred by what happened to her brother.

The death of her brother left Janet with indelible emotional scars, but it’s the fight to find out what her brother went through that has torn her life a part. She lives alone in a tiny rented flat in Halifax that tells the story of a life put on hold.

At the top of a dim, badly-painted hallway covered in graffitti tags, one cramped L-shaped space serves as the kitchen, dining and sitting room. In a dark corner by the sink, there is a filing cabinet and piled-up crates of documents relating to her brother’s case. The documents virtually block the way to the small work surface, but the clutter piled on top of the electric hob gives away the fact Janet hardly ever cooks for herself anyway. The area set aside as a living space is barely wide enough for a sofa. Janet says that she has lived there for three years, but it has never felt like a home, really it’s just a space where she can work on the case.

The muffled footage picks up an officer saying: ‘He’s acting now’ and ‘this is a show this’.

Her dogged campaigning has also taken its toll on her closest relationships – her son and daughter left home aged just 15 and 17. ‘It’s taken away my children, because my daughter was at an age, 17, when she needed me, that age when she was changing from a teenager into a woman, and I kind of pushed them away because I didn’t want them to see the pain and feel the pain.

‘Your priorities change, issues that are probably quite normal to other people don’t seem as important as somebody losing their life. They lost their mum. They lost a mother and something else came out.’

The ceaseless fight also damaged her health. ‘I ended up with my adrenal glands shutting down completely – I’m just getting better now. My nerves were shattered. I had asthma attacks all the time – I was in hospital all the time. My hair fell out.’

But things have changed.  In November the government agreed to pay more than £22,000 compensation. Janet had eventually taken her case to the European Court of Human Rights but the government decided it would settle and said it regretted the ‘treatment in custody’ of her brother.

Now, some thirteen years after her brother’s death, Janet says she is beginning to put her life back together. But she says if only she had been told the truth from the start, rather than being confronted with a system that she felt closed ranks against her, things would have been very different.

‘I would have moved on a long time ago if the state had said, ‘look, there’s been something wrong here and we’re not having this’. It would have been an example to those that are joining the force. It would have built confidence in the ordinary people that expected a service off the force and once somebody tells you the truth, you can’t help but accept it and move on.’