January 12, 2012 by Melanie Newman and Emma Slater
Published in: Health
Tweet
Email this 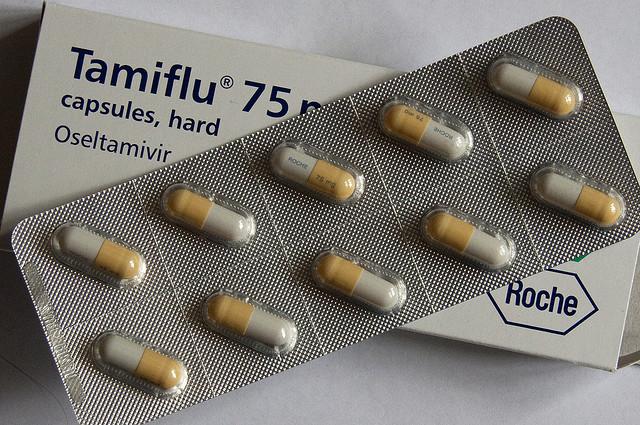 Swiss pharmaceutical giant Roche withheld vital data about the effectiveness of its swine flu drug Tamiflu from scientists, a report will claim next week.

The report, to be published on January 18 by the Cochrane Collaboration, a group of medical experts, set out to test Roche’s claim that Tamiflu reduced the number of patients who needed to be hospitalised following infection with swine flu.

Roche claimed the drug helped to prevent the transmission of influenza, and treat its symptoms.

But when reviewers tried to examine the company’s claims, the scientists allege that their investigation was significantly hindered by Roche’s refusal to provide full clinical data.  This claim was made public today by one of the founders of the Cochrane Collaboration at a British Medical Journal conference held in London.

‘In December 2009, after we voiced serious concerns in the BMJ about Tamiflu’s alleged ability to reduce compliations, Roche wrote that it was ‘very happy to have its data reviewed by the appropriate authority or individuals’ and publicly pledged to release 10 ‘full study reports’ in the ‘coming days'”.  They went on to state that “despite extensive correspondence over the next year and a half Roche refused to provide any more than portions of the clinical study reports.’

GlaxoSmithKline, the makers of Relenza – an alternative antiviral which is taken as an oral inhalant – is understood to have made all of its data available to the Cochrane reviewers.

Gold standard
Cochrane reviews bring together the combined results of the world’s best medical research studies, which are recognised as the gold standard in evidence-based health care.

Professor Sir Iain Chalmers, a founder of the Cochrane Collaboration, told the Bureau, ‘we have invested millions of pounds on stockpiling Tamiflu on the basis of a paper that presented the results of 12 trials, only two of which have been published.

‘The investigation… shows Roche refused to provide data to evaluate these trials. Investigators got some data through the European Medicines Agency but this doesn’t answer all of the questions they have’.

‘It is a disgrace that Roche have not provided this data,’ said Professor Chalmers.

In response, a Roche spokesperson rejected Professor Chalmers’ criticism.  They maintained the group ‘stands behind the robustness and integrity of our data supporting the efficacy and safety of Tamiflu.’

‘All completed Roche sponsored clinical studies on the safety and efficacy of Tamiflu are available as peer-reviewed publications or in summary form on www.roche-trials.com. More detailed clinical trial reports are available for use by investigators on a password-protected site,’ the spokesperson told the Bureau.

‘Roche provided the Cochrane group with access to 3,200 pages of very detailed information, enabling their questions to be answered.’

In June 2010, a separate investigation by the Bureau and the BMJ revealed that key scientists advising the WHO on pandemic influenza had financial links to Roche and GSK, which stood to profit from the organisation’s decisions.