December 14, 2011 by David Pegg
Published in: Uncategorized
Tweet
Email this 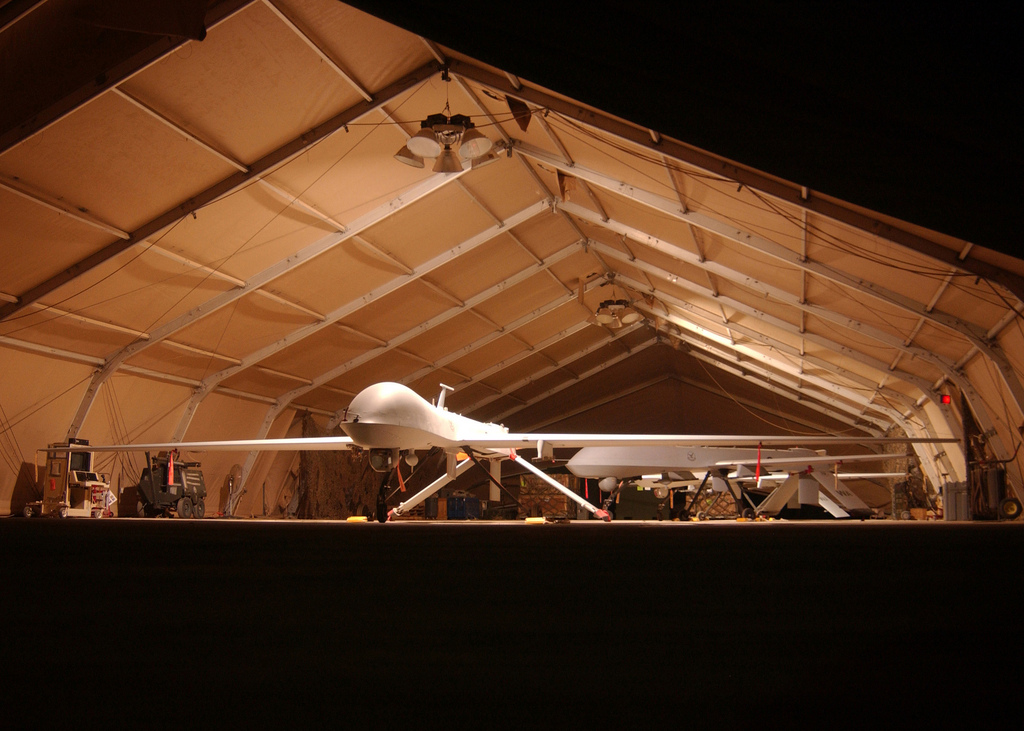 A Predator drone prepares to take to the skies.

The flag of the United States military was lowered in Baghdad today during a ceremony to finally mark the end of operations in Iraq. Defense Secretary Leon Panetta told troops they could be ‘secure in knowing that your sacrifice has helped the Iraqi people to cast tyranny aside’.

Yesterday, at a speech to returning troops in North Carolina, President Barack Obama hailed the ‘moment of success’ and told soldiers they were departing with their ‘heads held high’.

By the end of the year, the US will have withdrawn the remainder of its forces from Iraq after eight years of combat operations. This will include its armada of combat and surveillance drones – a fleet that has transformed during the occupation and US presence.

In 2000, the US had less than 50 unmanned aerial vehicles (UAVs) in operation in Iraq, most of which were for surveillance. Today the US Department of Defense (DoD) has more than 7,000 drones at its disposal globally. And those systems have become vastly more sophisticated.

The American DoD expects to spend more than $24bn (£15.5bn) on new drone systems and expanding the capabilities of its existing ones, between 2010 and 2015. In a speech at a conference in Virginia last month, Mike Rogers, chairman of the US House of Representatives’ Permanent Select Committee on Intelligence, described the appetite for drones in the military as ‘insatiable’.

‘Every year there is increased demand for additional manned and unmanned systems with increased capability,’ he said.

The rise in the use of drones in Iraq has mirrored the broader proliferation of UAVs around the world. Billions of dollars will be spent on drones this year by police forces, border agencies and armies. The aircraft range from hummingbird-sized spies to gigantic dirigibles that harvest the telecommunications traffic of an entire region.

What started out as a system that was only available in few numbers and controlled at the highest levels has now made it down. Every one of our brigades has its own drone.
Major General Jeffrey Buchanan

‘There is a simple reason for this increased demand; these systems provide overwatch information directly to troops in conflict and they provide a nearly “unblinking” eye to the IC and operational commanders,’ Rogers added.

The Bureau has also been told that once the US has withdrawn its drones from the country, the Iraqi Navy will continue to fly its own surveillance craft – Scan Eagles – to patrol its maritime borders and protect its oil rigs.

‘Every one of our brigades has its own drone’
Last month, the Bureau spoke to Major General Jeffrey Buchanan, chief spokesman for United States Forces in Iraq, about how drones have changed the way in which the US fights its wars.

Speaking from Baghdad, General Buchanan explained: ‘Technology has evolved over time. What started out as a system that was only available in few numbers and controlled at the highest levels, has now made it down. Every one of our brigades has its own RPA [remotely piloted aircraft].’

He denied that ‘lethal fires’ – assassination missions – had defined the US’s use of drones in Iraq, focusing instead on how they had changed reconnaissance.

‘The dominant use in Iraq has not been for providing ground attack or things like that,’ he said. ‘It’s really all been about ISR [intelligence, surveillance and reconnaissance]. We’ve used RPAs in combination with piloted aircraft, working directly for ground commanders, providing extended surveillance on key communication routes or oil pipelines or borders.

‘You have miles and miles of empty pipeline going across the desert. It’s far more efficient and effective if you maintain surveillance on it through the use of UAVs than if you sustain an assault every 200m.’

The US is secretive about the total number of drones it operates in Iraq, but has disclosed that as of the beginning of November it was flying 57 surveillance flight routes. More than 788,000 combat hours have been flown by unmanned aerial vehicles since 2009, with between 8,000 and 11,000 reconnaissance flights a year between 2008 and 2011.

Speaking prior to the Iranian capture of a US spy drone earlier this month, General Buchanan said: ‘We have had occasional UAVs come across from Iran. And we see them regularly flying on their side of the border.

‘My observation of it is that over the last three or four years, it’s been fairly steady. It’s not been a great number, but we have seen incidents.’

Last week, Tehran released video footage of what appears to be a CIA spy drone that had crashed – or been forced to land – more than one hundred miles inside Iran.

Although the US has not formally admitted ownership of the UAV, President Obama has said the US has asked for the craft’s return. Iran has rejected the request.

The Iranian footage appears to show an RQ-170 Sentinel, dubbed ‘The Beast of Kandahar‘ as it had only previously been seen at Kandahar airbase in Afghanistan. A Sentinel was alleged to have been used by the White House to monitor the Osama bin Laden assassination mission.

In February 2009, an Iranian drone – the Ababil-3 – was shot down in Diyala province, Iraq. It was believed to have been monitoring a US military outpost and Camp Ashraf, an Iranian refugee camp in Iraq.

Predators help warm relations with Turkey
The US will not discuss where its Iraq drones will go. However, at least four are known to have been moved to Turkey. The Predators will be flying from Incirlik, a joint US-Turkish airbase, to conduct reconnaissance and surveillance missions against the PKK, a Kurdish separatist group.

Although the drones will be piloted by US troops, the Turkish military will play a key role in dictating flight paths, and will have simultaneous access to reconnaissance data.

A Pentagon spokeswoman confirmed to the Bureau: ‘As a key US ally, Turkey has agreed to base our Predators at Incirlik Air Base. The United States and Turkey have a standing partnership in addressing issues of regional and global security, and we support Turkey with their counterterrorism efforts.’

The Incirlik deal also marks an improvement in the relationship between the US and Turkey, which had soured after Turkey blocked a UN bid to impose sanctions on Syria.

Kadir Ustun, research director at SETA, a Washington-based think-tank that examines Turkish issues, said: ‘Relations are at a very good place. Turkey has matured now to say “We agree on X, Y and Z, but we don’t agree on this particular issue”, and I think there’s a more healthy working relationship in that sense,’ he said.