December 9, 2011 by Pratap Chatterjee
Published in: Uncategorized
Tweet
Email this 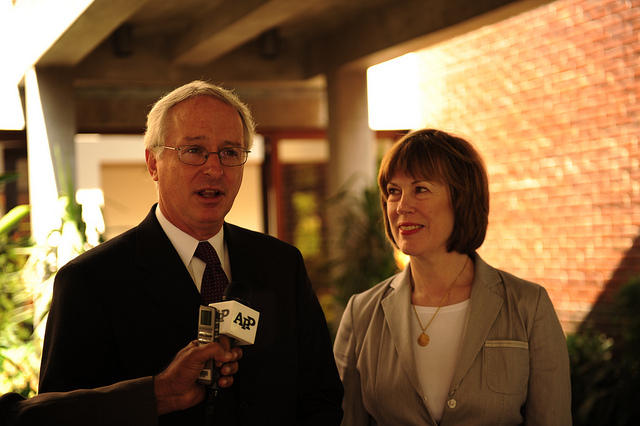 Cameron Munter, the US ambassador to Pakistan, faces a potential lawsuit in Pakistani courts for the killing of Tariq Aziz, aged 16, and Waheed Khan, aged 12, in late October in an alleged drone strike in North Waziristan launched by the Central Intelligence Agency.

Aziz had just returned from a gathering of families of drone strike victims in Islamabad to discuss the impact of US drone strikes in their communities, where the Bureau was the last to photograph him before his death. At the meeting, which was organised by Reprieve, a British legal charity, the teenager had volunteered to take a camera back with him to document the impact of drone strikes, little knowing that he would be killed three days after he returned.

‘I am considering initiating legal proceedings against you as a co-conspirator in Tariq and Waheed’s murder’
Shahzad Akbar, Foundation for Fundamental Rights

‘I am considering initiating legal proceedings against you as a co-conspirator in Tariq and Waheed’s murder – for murder is the only word that can properly be applied to the act committed by CIA agents and their accomplices,’ wrote Shahzad Akbar, the director of the Foundation for Fundamental Rights in Islamabad, in a letter dated December 2.

Decision to strike
Akbar’s lawsuit is based on a Wall Street Journal article that reported that new rules have recently been put in place to ensure that the US State department was informed of planned drone attacks in Waziristan.

‘To try to set this in perspective, can you imagine what would happen to the Pakistan Ambassador to Washington if, when she arrives there in the next week or so, she were publicly tasked with signing off on Pakistani hit squads assigned to kill people we do not like in America?’ Akbar wrote.

Akbar says that if the ambassador was signing off on the strikes, his actions would be a violation of the Vienna Convention on Diplomatic Relations 1961 and the Vienna Convention on Consular Relations 1963: ‘It seems clear to me that if an Ambassador is engaged in an illegal, undeclared war in the country where he is stationed, then he would not enjoy immunity, and would at a minimum expect to be expelled forthwith,’ he wrote.

Mark Stroh, the spokesman for the US embassy in Islamabad, declined to comment to the Bureau about the letter.

Legal challenges
Bureau analysis into drone strikes estimates that they have killed between 2,373 and 2,997 individuals in 309 strikes. At least 175 have been identified as children.

Several legal challenges have been mounted in Pakistan over these strikes, with the help of the Foundation for Fundamental Rights. In November 2010, Karim Khan, a journalist in Waziristan, threatened to sue Jonathan Banks, the CIA head of station in Islamabad, for the killing of his brother and his son, Asif Iqbal and Zaenullah Khan, in the town of Mir Ali in North Waziristan on December 31, 2009. Banks fled the country shortly after.

In July 2011, three Pakistanis brought a lawsuit against John Rizzo, the former legal counsel of the CIA, after he told Newsweek that he was the person who signed off on drone strikes.

‘It seems clear to me that if an Ambassador is engaged in an illegal, undeclared war in the country where he is stationed, then he would not enjoy immunity’
Shahzad Akbar, Foundation for Fundamental Rights

In November, the Peshawar High Court was petitioned by the Defence of Pakistan Council, an alliance of political parties, to make public details of the government’s ‘secret deal’ with the U.S.

More legal challenges are expected in coming weeks and months. Reprieve and the Foundation for Fundamental Rights are preparing a variety of new lawsuits to be launched in Pakistan, the UK and in the US.

The aim of the campaign is to challenge the drone war and hold US officials and contractors accountable for their actions as well as their UK counterparts, says Clive Stafford Smith, the founder of Reprieve. In previous years, the organisation mounted similar campaigns with measurable success against the CIA secret rendition programme and prisoners held in Guantanamo Bay.