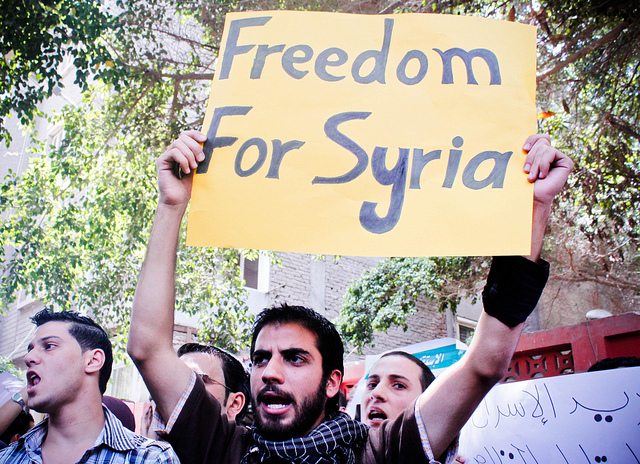 Over 3,500 Syrian revolutionaries have been killed by Assad’s forces since March.

A British company has been implicated in the sale of state-of-the-art spying technology to Syria, a joint investigation by the Bureau and Newsnight can reveal.

The technology, which enabled the Syrian government to manage a system that could allow the interception and archiving of email and telephone communications, was sold to the regime by Italian company Area.

However, the Bureau has learned that vital surveillance and telecom-tapping equipment that formed part of the package sold by Area, to the Syrian government was made by Utimaco, which is part of Sophos, a British company based in Oxfordshire.

It is alleged that President Bashar al-Assad’s regime either did or intended to use this British software to target activists who have been uploading footage of civil uprisings to the internet.

Since late May, and early July, I know of about 40 to 50 people… who have been arrested. And we believe they have been arrested as a result of this new technology and software that the Syrian regime is using to target activists.
Mahmoud Ali-Hamad, Syrian activist

Following the discovery of the technology in Syria, media pressure on Area has reportedly led the company to pull out of its deal with the country earlier this week, taking with it Utimaco’s equipment.

A data trove
The revelations come as WikiLeaks and Privacy International release documents showing the scale and breadth of the secretive surveillance industry, worth an estimated $5bn a year worldwide.

Since March 2011, Syrians have taken to the streets in protest over a lack of democracy and alleged human rights abuses by their government, following a wave of civil resistance to state repression across the Arab world.

According to the UN, over 3,500 revolutionaries are estimated to have been killed by troops and militias loyal to Assad in his attempt to crush dissent.

It is believed the regime has now extended its search outside the Syrian borders, trawling cyberspace for anti-government activists.

Activist Mahmoud Ali-Hamad lives in Brighton. He has no permanent address, instead flitting from place to place using friends’ computers and internet connections to communicate with protesters and disseminate material to the international media.

He believes that those using the web to spread incendiary footage of the regime’s crackdown around the globe could be at higher risk of being arrested than people on the street, because the equipment supplied by Sophos could be enabling the Syrian government to locate users.

‘We have about a hundred names of cyber-activists including women and people actually under the age of 18 who have been now listed as wanted by the Syrian regime… they are the ones who are in constant contact with us and supplying us with information and videos of demonstration.

‘Since late May, and early July, I know of about 40 to 50 people… who have been arrested. And we believe they have been arrested as a result of this new technology and software that the Syrian regime is using to target activists,’ he told the Bureau.

Responding to the Bureau’s findings, Steve Munford, chief executive of Sophos, confirmed the company was aware that its equipment was to be installed in Syria when it signed the deal in 2010, and admitted that he was ‘concerned’.

‘When we see situations like Syria – absolutely we are concerned… we absolutely will stop doing business with anyone who is contributing to this,’ Munford pledged.

Sophos said the deal with Syria had been terminated.  It’s Italian business partner said the system was installed but not operational.

Government ministers ‘turn a blind eye’ to export?
On November 8 2011, crossbench peer Lord David Alton of Liverpool called on the UK government to ban the export of espionage software and equipment.

Through persistent questioning in the House of Lords, Lord Alton uncovered that another British surveillance company, Creativity Software, received a ‘stamp of approval’ to sell its software to another oppressive regime: Iran.

‘Technology of this kind can be every bit as lethal as the bullets that might be directly sold by a munitions company or armaments quartermaster,’ he told the Bureau.

‘My concern is that it’s not just Iran but throughout the whole of the region that we have been aiding and abetting the very despots that democracy activists and human rights campaigners have been trying to replace.’

The UK government maintains that it will ‘prevent the export of goods which could be used for undesirable end use, including internal repression and external aggression’.

They announced new restrictions on the sale of software which could be used to monitor dissidents.