November 28, 2011 by Charlie Mole and David Pegg
Published in: Uncategorized
Tweet
Email this 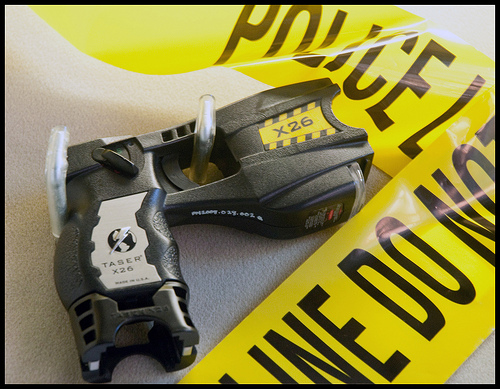 The police force currently under investigation over a Taser-related death is one of the most prolific users of ‘repeat-Tasering’ in the country, despite concerns that repeated use of the stun-guns present a significant risk to life.

A Bureau investigation into Taser use by the police has found that Cumbria Constabulary has used repeat-tasering, where an individual is subjected to repeated or prolonged electric shocks, 12 times since November 2010. This is more instances than recorded by the Metropolitan Police, despite Cumbria Constabulary having a much smaller population to police.

Cumbria has been under investigation by the Independent Police Complaints Commission since August, when bodybuilder Dale Burns, 27, died after being electrocuted at least three times at his home in Barrow. At least one individual has been repeat-tasered by Cumbria Constabulary since the incident.

The findings come as the new Metropolitan Police Commissioner, Bernard Hogan-Howe, announced he wanted to see every police car in the country equipped with a Taser.

Concerns have been raised about the impact of repeat-tasering, and in particular the lack of research into the effect of prolonged and repeated electric shocks caused by a taser.

State pathologist for Northern Ireland Professor Jack Crane told The Bureau: ‘Repeat-tasering is a very risky business. If someone collapses and dies after being tasered repeatedly I’d be inclined to blame this than any other medical condition.There are a lack of signs that show up at autopsy so the cause of death is often inconclusive. It is dangerous to put that amount of electricity through someone’s body – some people are more susceptible to developing a cardiac arrhythmia.’

In a report published in May this year, the US Department of Justice highlighted the dangers of repeat-tasering using Controlled Electrical Devices (CEDs). It said: ‘Deaths associated with CED use often involve multiple Taser activations (more than one Taser at a time) or multiple five-second cycles from a single Taser’.

Research available on repeat-tasering is anecdotal. But of 59 case studies of taser-related deaths in the US cited in a 2008 Amnesty report, 46 involved, or are alleged to have involved, repeat-tasering.

In Canada, all of the six who died in taser-related incidents in 2005 and 2006 were shocked multiple times; in one case up to 12 times in three minutes.

Manufacturer Taser International, which declined to comment when approached by the Bureau, has consistently denied that its products pose serious health risks, citing studies by medical experts and law enforcement that demonstrate a reduction in serious injuries or deaths in incidents where the device has been deployed.

In response to a Freedom of Information request sent to all constabularies asking for numbers of recorded multiple-taser incidents, 21 police forces reported having used multiple-tasering since the weapons were issued to their officers.

At least 158 people have been subjected to multiple-tasering since the weapons were rolled out across the UK. West Yorkshire reported 17 incidents since January, Lancashire Police reported 11 incidents between April 2010 and April 2011, whilst the Metropolitan Police repeat-tasered seven people last year.

Eleven police forces reported they did not record the number of multiple-taser incidents to occur in their force.

Amnesty International’s UK Arms Programme Director Oliver Sprague said: ‘It is truly alarming if individual police forces are telling you they are not required to record, provide or analyse this data.

‘All police officers must justify each and every use of force and must be accountable for that decision. Amnesty’s research has pointed to a particular risk when people are subjected to multiple Taser firings, beyond the default five second shock cycle. Indeed there have been a number deaths in the US after such multiple taserings.’

Officers are allowed to repeatedly Taser a suspect if they deem it to be proportionate to the situation. However, the Association of Chief Police Officers’ Taser Operational Guidance manual warns that ‘users should avoid prolonged, extended, uninterrupted discharges whenever practicable in order to minimise the… potential impairment of full ability to breathe over a prolonged time period’.

A Home Office spokesperson said: ‘Chief Constables manage the use of tasers in their force. This is based on ACPO guidance, which makes clear they should only be used when there is a serious threat of violence.’

A prominent method of police control

Taser International cites numerous studies to support its claim that its products pose no statistically significant risk to people against whom they are used.

However many existing reports only assess the medical impacts of Taser use against fit and healthy individuals. The consequences of Taser strikes against the young, elderly, or individuals with heart problems, remain largely unexamined.

Cumbria Constabulary’s press officer Ben Meller said: ‘Taser officers are selected for their judgement, temperament and self-control and trained to understand the implications of Taser use.

‘The understanding and application of these legal constraints serve to ensure proportionality, and no further protocols are considered necessary.’

In response to a request for comment on the death of Dale Burns, the IPCC said: ‘The investigation into the death of Dale Burns is progressing well. We have received toxicology results which we have shared with Mr Burns’ mother. We await a full pathologists report in which we expect to receive an opinion on the probable cause of death. It would be inappropriate for us to comment further publicly at this stage.’